Roti by rote: Now, it’s time for bots to invade the kitchens

Bengaluru-based Mukunda Foods came up with the idea of creating automated machines to make up for incompetence in our kitchens. 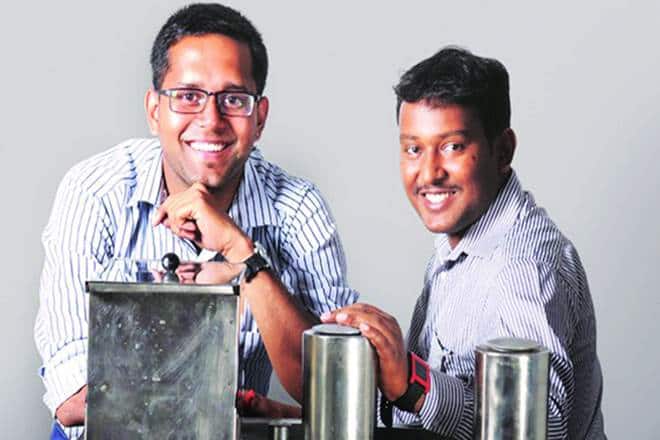 The ultimate test of one’s culinary skills is often associated with the roundness of rotis or chapatis that feature on the plate of most north Indian households. You can attain mastery over recipes of all kinds of exotic dishes, but if your roti fails to be of right consistency and shape, you will be deemed an imperfect cook. And kneading the dough is no easy business. Just the thought of having to struggle through portions of flour and water can lead any chapati lover astray.

Bengaluru-based Mukunda Foods, a kitchen robotics company, noticed this and plenty of other lags in the food segment and came up with the idea of creating automated machines to make up for incompetence in our kitchens. Founded in 2012 by engineer duo Eshwar K Vikas and Sudeep Sabat, the company took cues from the analogy of coffee dispensing machines and developed products like Dosamatic and Doughbot, priced at around `2 lakh each, to make the task of creating perfect dosas and rotis relatively easy, efficient, convenient, and less of a hassle.

“The food industry is expanding at a rapid pace because of which it is facing challenges in hiring labour and maintaining consistency and taste of food. These are the two specific areas that we aim to tackle by way of kitchen automation,” says Vikas. The duo first developed Dosamatic — a fully automatic tabletop dosa-making machine — during their engineering days at SRM University, Chennai, where dosa lover Vikas thought of developing a product that would serve up crispy and authentic dosas. After conducting a successful pilot in a nearby stall, the engineering graduates worked further on their models to introduce refined versions to the market after their course completion. It soon caught the attention of angel investors, and the company, since, has successfully received funding to the tune of crores in two rounds.

While the company has been around for more than seven years, the Mukunda Foods team believes that they have truly arrived just now. “Due to the change in consumption patterns, cloud kitchens and quick service restaurants are set to become mainstream, and, therefore, kitchen automation will be the next big thing in the segment. Our focus now is to increase awareness and work more towards identifying pain points in the process of food creation and delivery among brands, and develop customised automation accordingly,” says Prateeksha Rawat, head of marketing at the company.

While the concept of kitchen automation is yet to gain massive traction, a number of players such as Agrima Infotech, Gulpie and Mechanical Chef have disrupted the space to capture a sizeable share in the fairly new market. What sets Mukunda Foods apart, as per its founders, is its ability to be as flexible and open to customisation as possible. “We have worked and continue to work extensively with the human side of the segment, chefs, while developing machines for their kitchens. Every restaurant cannot have the same tasting dal makhni, for instance. So we work on the recipe with the chefs and let them take a call on the steps of automation they wish to follow,” says Rawat. “Besides, all our machines are 100% IoT (internet of things) -powered. All one has to do is upload the recipe on cloud so that we can meet the requirements in less than half-a-day,” adds Vikas.

Currently, over eight-10 different types of Mukunda Foods’ machines are deployed in 2,000 locations across the globe, resulting in their topline growing five times on a yearly basis. Going ahead, the team is looking to deploy 10,000 machines in the next two years.

Follow us on
Latest News
Airtel says more than 10 lakh people on 5G in less than 30 days of service launch
UGC urges varsities to refund full fees against cancelled admission
Delhi: CM Kejriwal announces Rs 5,000 aid to workers amid ban on construction work
Delhi: AAP govt urges people to work from home, says ‘50% air pollution from private vehicles’
How to avail tax benefits by investing for a shorter period
Assembly byelections 2022: Voting for bypolls to seven vacant seats across six states tomorrow
AAP says BJP targeting Punjab farmers for stubble burning because of protests against farm laws
Photos
Heart-wrenching! Here is a look at Morbi and the suspension bridge that collapsed
2 days agoOctober 31, 2022
In Pictures: PM Modi in Kargil to celebrate Diwali with soldiers, says, ‘All of you have been my family for years now’
1 week agoOctober 24, 2022
In Pictures: PM Modi inaugurates Deepotsav in Ayodhya; World record set by lighting of over 15 lakh diyas
1 week agoOctober 24, 2022
Read More
×
What keeps Katrina Kaif so fit? Know it from her go-to-nutritionist
Delhi to now have special mohalla clinics for women, says CM Arvind Kejriwal
Delhi’s air quality improves marginally; curbs under GRAP’s stage 4 not likely for now
Plastic waste is the perfect building material, here’s why
COVID-19 shown to trigger inflammation in the brain: Study
Empathy, collaboration and inclusion! The leadership style of most emerging women leaders in social sector, finds survey