How boxing, politics and corruption come alive in a film, reveals Vineet Kumar Singh of Mukkabaaz, which had its world premiere at the recently concluded Toronto International Film Festival 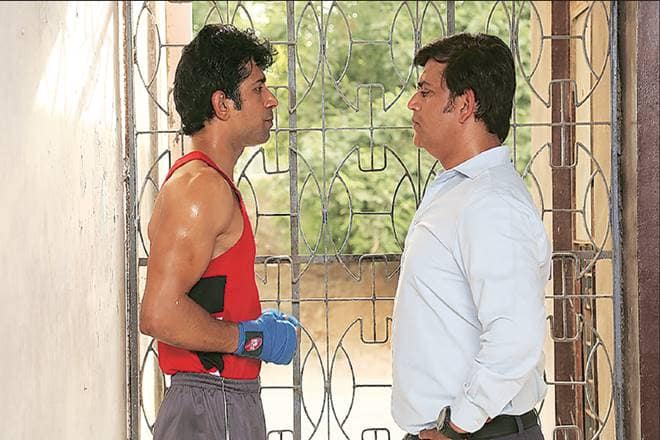 The film tells the story of Shravan Kumar Singh, a boxer from Bareilly, Uttar Pradesh, who is forced to fight corrupt coaches, sports administrators and politicians to earn his place in the national championship.

Four years ago, Vineet Kumar Singh went to the Cannes film festival, which was celebrating the centenary of Indian cinema by screening Bombay Talkies, a four-film anthology of which he was a part. The Varanasi-born actor played the part of Vijay (a boy from Allahabad who travels to Mumbai to meet Amitabh Bachchan) in Murabba, one of the short films in Bombay Talkies. Singh’s Vijay spends several days in front of Bachchan’s home in Mumbai to fulfill his father’s dream to hand over a jar of home-made murabba to his favourite actor. Last week, Singh was at the 42nd Toronto International Film Festival (TIFF) to fulfill his own dream—to premiere a film scripted by himself.

Mukkabaaz, a Hindi film scripted by Singh, was a huge draw at the Toronto film festival, which concluded on September 17. The film tells the story of Shravan Kumar Singh, a boxer from Bareilly, Uttar Pradesh, who is forced to fight corrupt coaches, sports administrators and politicians to earn his place in the national championship. The film is directed by independent filmmaker Anurag Kashyap, who also directed Murabba. “I wrote the script in 2013 and met many producers to make a movie,” says Singh, who had one condition: he should play the lead role.“I got many offers, but nobody wanted to make a film with me as the lead actor,” says Singh. When Kashyap was shown the script, Singh’s fortunes changed. “He (Kashyap) told me, ‘I like the script and I am going to make it with you’,” recalls Singh, who was in Toronto with his director and fellow actor Zoya Hussain for the world premiere of Mukkabaaz. The film, which links sports with politics in the country, paints a violent picture of India, where caste and class continue to crush many dreams more than six decades after independence.

Once he landed the lead role, Singh travelled to Patiala, where the country’s most talented boxers are groomed at the National Institute of Sports. “I sought the help of Anujit Singh, a national coach. I didn’t disclose that I was going to play the role of a boxer in a film,” says Singh, whose previous acting credits include Gangs of Wasseypur and Ugly.  Interestingly, the boxers appearing in Mukkabaaz are all international-level sportsmen. “All the boxers in the film have participated in international championships,” says Singh, whose character spars with many of them in the film. “There is Neeraj Goyal, Sandeep Yadav and Deepak Tanwar, all highly talented boxers,” he says. The film, which adds a heavy dose of the country’s contemporary politics like lynching of suspected cow meat traders, is shot in Bareilly, Varanasi and Lucknow to put the spotlight on politics in India’s largest state. “We have highly talented sportspersons in our country, but they don’t realise their dreams because our sports is controlled by powerful people with vested interests,” says Singh. While Singh learned boxing, his fellow actor Zoya Hussain trained in sign language to portray the role of the mute niece of a corrupt coach. “I didn’t master sign language, but non-verbal communication is one of my strengths,” says Hussain, who studied political science and sociology at Sri Venkateswara College in Delhi. Hussain, a self-confessed “super Indie actor”, took up theatre in the national capital before moving to Mumbai to act in films.
Faizal Khan is a freelancer