The Kanwar Yatra is an annual pilgrimage of devotees of Lord Shiva, known as Kanwarias. 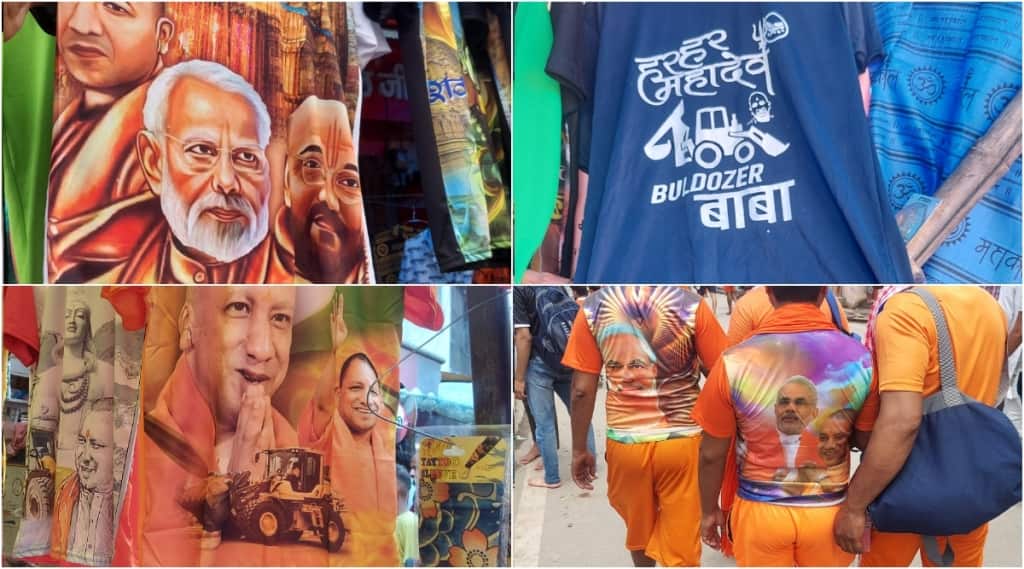 The Kanwar Yatra is an annual pilgrimage of devotees of Lord Shiva, known as Kanwarias.

This year Kanwar Yatra has a brighter saffron shade on it as T-shirts with photos of Prime Minister Narendra Modi and Uttar Pradesh Chief Minister Yogi Adityanath are in high demand among the Kanwariyas. A large number of devotees of Lord Shiva can be seen wearing these attire in different parts of the country. Expressing their joy, Kanwariyas say that it is a way of showing respect for the two powerful Bharatiya Janata Party (BJP) leaders.

Talking to Financialexpress.com, Santosh Pandey who came to Haridwar from Muzzafarnagar said, “Yogi ji is our idol and PM Modi is the leader of the nation. This is our way to show respect to the two big leaders of the country.”
When asked why political leaders’ picture should be displayed in a religious procession, Ajay Valmiki from Rewari said, “I don’t think there is an issue. All politicians have used religion what is the problem if we use Modi-Yogi pictures?”

Amit Rawat, a shopkeeper near Har Ki Pauri in Haridwar, told Financialexpress.com, “T-shirts with Modi-Yogi pics are flying off the shelf. They are a big hit with Kanwariyas. People are asking for these T-shirts.”

Also Read
Delhi to see highest festive travel demand among metros, says Oyo forecast
Indian Railways shares mesmerising video of Aryankavu Tunnel that connects Kerala and Tamil Nadu
Navratri 2022: What should you offer to Maa Durga this Navratri as per zodiac sign
Navratri fasting and travelling? IRCTC got you covered with its ‘Vrat Thali’ – Check menu, prices, how to place order

Some T-shirts also have pictures of bulldozers printed on them along with the caption “bulldozer baba”. It is pertinent to mention here that the term is being used for UP CM Yogi. In the last few months, UP CM demolished the houses (with bulldozers) of those who were allegedly involved in criminal activities and rioting.

The Kanwar Yatra is an annual pilgrimage of devotees of Lord Shiva, known as Kanwarias. To fetch the holy waters from the Ganges river, they visit Hindu pilgrimage places of Haridwar, Gaumukh, and Gangotri in Uttarakhand and Sultanganj in Bihar.

They collect sacred water from the Ganga and carry it across hundreds of kilometers to dispense as offerings in their local shrines of Lord Shiva. Kanwarias can also offer water in famous Shiva temples.