Playing a Different Tune: Ukelele has been flying off the shelves of music stores since pandemic hit — here’s why

The ukelele, a guitar-like Hawaiian instrument, is flying off the shelves since the pandemic hit. Fans say it’s an easy-to-learn hobby and an instant pick-me-up 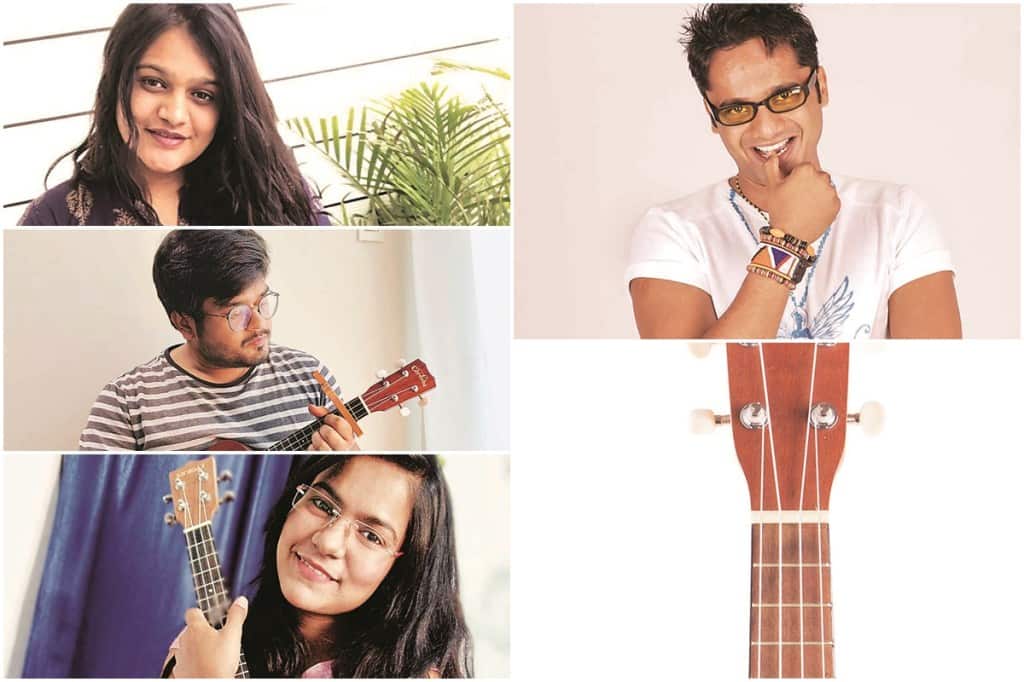 A ukelele has four strings, while an average guitar has six. its fretboard and frets are also much smaller

Ask anybody which musical instrument they would like to learn and chances are they’ll say the guitar. Hanging on the shoulder leisurely or wedged between the hands like a rockstar, the guitar never fails to cut a cool picture. And just a strum is enough to get listeners grooving.

Yes, we get the craze. However, the pandemic has thrown up another favourite. Sample this: Shivani Vijay, a 24-year-old from Bengaluru, can’t get enough of her ukelele — it looks like an acoustic guitar, albeit smaller. She bought it last September after quitting her IT job to pursue a hobby she had long nursed. In a month, she taught herself to play the laidback Kho gaye hum kahaan, followed by the whimsical Tum jab paas aati ho and the pensive Agar tum saath ho. Her mother likes to playback the classic Ajeeb daastan hai sometimes when Vijay plays the ukelele. Known for its warm, nimble, lilting sounds, the Hawaiian instrument has brought Vijay much cheer in these gloomy times.

Also Read
The 7 bottles you need for a well-stocked home bar
International day of forests: Collaborative effort to help save our forests
Ambani Family Tree: Meet all the members of ‘The Ambani Family’
Sea-Facing Penthouse to Lamborghini Gallardo: A look at Pathaan actor John Abraham’s Rs 251 crore net worth

“Most of my friends in college could play the guitar and I also wanted to learn it, but found it intimidating. As for the ukelele, it’s like a guitar, but smaller and less intimidating. I learnt to play it by watching online tutorials and, seven months on, I am ready to invest in a guitar. Thanks to my ukelele, I have a fair grip on the strings now,” shares Vijay, who is currently self-employed.

Like Vijay, many people, including singer Shreya Ghoshal and actors Kalki Koechlin and Bhumi Pednekar, are increasingly buying the ‘uke’ since the novel coronavirus sent us indoors in March of 2020. Social media is abuzz with #ukelelecovers set to the ‘chota guitar’, as it’s loosely called, and photos of ukes decked in fairy lights. Online music classes have now added ukelele to their portfolio as well. And despite the sluggish business scene, the musical instrument is flying off the shelves of Indian music stores more than ever before.

Vijay, who recovered from Covid-19 a month ago, says, “In the book I am currently reading, Women Who Run With The Wolves, the author says when you are feeling lost, music is a good way to bring yourself back to feeling better. Maybe that’s why people are pursuing music in the pandemic.”

But why the ukelele? Chitransh Nilay Saxena, a 27-year-old techie from Uttar Pradesh who is working in the Philippines, has his reasons. “The sound of a ukelele is different from that of a guitar. The former is soothing yet peppy. Even sad songs sound upbeat on the ukelele. The guitar, on the other hand, has a more rock and concert vibe to it (sic),” explains the hobby singer, who bought his uke last August, four years after he got a guitar, but never got his way around it. Today, he is uploading ukelele covers on Insta and has even done a gig for friends over a video call.

Likewise, Nandini Yadav is doing what she could not do on the guitar in the past. She is finetuning the charming ballad Hey There Delilah on her uke of seven months. It’s a stressbuster for the sub-inspector who is posted in Uttar Pradesh’s Basti district. It’s also an accomplishment. “My resolution for 2020 was to learn a musical instrument and I have done it with the ukelele. It’s light and compact, so I carry it when I travel,” says the 28-year-old.

Chin2 Bhosle, a music educator at Furtados School of Music, understands why people are having it easy with their uke. In fact, his 14-year-old daughter learnt to play four songs on the ukelele by herself via YouTube in three months after dodging the guitar. “A ukelele has four strings, while an average guitar has six. Also, its fretboard and frets are much smaller, so not much finger gymnastics needed,” he explains.

‘Sales across all ages’

Music store owners confirm the uptick in ukelele sales through the pandemic. While Reynold’s, which has three stores in Bengaluru, the music capital of India, saw a twofold increase compared to 2019, Dhanya Anish, operations manager of Thomsun Music House across Bengaluru and Kochi, claims that the brand sold out a consignment of at least 500 ukeleles in a month’s time after the national lockdown was lifted in May last year.

At Kadence, which has pan-India operations, the ukelele emerged to be the most-sold instrument of 2020, surpassing the good ol’ guitar. “Though we brought the ukelele to India around the start of 2016, the sales have picked up only now. They are up by six-seven times,” COO Yash Gupta informs.

The instrument has benefitted from the celebrity support it has received on social media, including from Sunrisers Hyderabad cricketer David Warner, Gupta says. Adding to that list, Anurag Mukherjee, a music instructor in Hyderabad who has started offering ukelele classes, says, “In India, its popularity can be credited to artists such as Shirley Setia and Taba Chake.”

What’s also made it a go-to music instrument for hobbyists is that a basic ukelele comes for Rs 2,000, cheaper than guitars that start at Rs 5,000. The music store representatives agree that while their ukeleles go up to Rs 19,000 depending on the size (21-30 inches) and wood used in the body, the majority of sales happen in the Rs 2,000-Rs 2,500 range.

In terms of cities that are scooping up ukes the most, the names of Bengaluru, Mumbai, Delhi and Goa come up consistently. As for people buying it, it’s mostly college-goers above 20 and people in their 30s. “Girls seem to be buying it more… maybe because it’s light,” shares Anish. There are outliers too. At Furtados, children are lapping up the uke, while Kadence has seen people of retirement age order these.

Whatever be the reason, Mukherjee is glad that the ukelele, which was introduced in Hawaii in the late 1800s by the Portuguese, has come into its own. “It belongs to the guitar family, but is a different instrument,” he says.

Saxena can’t wait to take it where it belongs. “Every time I play the ukelele, I feel transported to a beach, sitting with my friends in a circle around a bonfire. I would love to do it once the pandemic is over,” he signs off.

Barkha Kumari is a writer and journalist