More power in the hands of small hotels: Djubo[dot]com 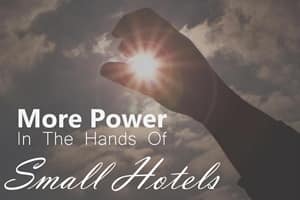 The past few years have seen a marked rise in the number of OTAs (Online Travel Agencies). They have largely proved to be popular owing to;

– For the first time consumers were able to compare a variety of accommodation options and choose what best fit their needs and budget.

– Ease of booking travel along with the accommodation.

– Detailed ratings, descriptions and reviews on hotels all in one location.

– A little bit of marketing magic, such as the thumbs-up icon at the end of the transactions, to constantly reassure the consumers that they have got the deal of a lifetime. Do not pass it off as trivial. Consumers love to be told that they have struck a bargain. Get yourself out of a hotelier’s skin and think about your own trips to the supermarket. Don’t you feel a sense of accomplishment at seeing the “Your Savings” line at the end of your bill?

Armed with these four manoeuvres, it is no wonder that the OTAs have recorded a meteoric rise. While great for the consumers, it does not bode well for the hotels’ marketing programmes and revenue projections. How so? For the answer to this, we need to dive into…

The devil lies in the details, they say. In this case, to be specific, it is the details of the contracts between the OTAs and the hotels. A commission is definitely due to the OTAs for distributing your hotels to thousands of people every day. But it gets complicated when the OTAs also demand rate parity from the hotels. Simply put, rate parity means that the hotel cannot undercut the price charged by the OTA either on its own website or in dealing with a competitive OTA.

The rate parity usually applies to a specific room-night and keeps fluctuating. This not only means that the planning and forecasts go awry in the already volatile hospitality market but also indicates that a hotel may have to relinquish some revenues that could have easily come its way had it got an opportunity to sell itself directly from its own website.

This effect is further compounded when other OTAs follow suit and slash down the prices on their own websites. The price war that ensues between the OTAs cripples the hotels’ price strategy. The OTAs argue that even if the price war was waging, any difference in the net rates, passed on by the hotel, and the final selling price on their own websites is absorbed by them.

The travellers are willing to spend time and effort to compare prices across websites in order to maximise their savings. So, any insouciant attempt to establish cost leadership by even a single OTA, ends up putting tremendous pressure on the revenue stream of the hotels.

Hotels have been attempting to dissuade OTAs from indulging in such price wars, by removing entire base categories completely from the OTA listings. However, such tactics by hotels fail to make a dent owing to the superior capability of the OTAs in distributing rooms combined with a surplus of room nights from the ever growing travel accommodation industry.

So, while the Goliaths of the hotel industry are able to keep up with their large budgets, the Davids are not quite able to take a stand. What the Davids need is a sling and a rock. Cue entry, Travel Meta Search Engines.

The OTAs claim to fame has been the ease of comparing that they offer. But with increase in the number of OTAs, the consumers are once again left in search of the best deal and have started comparing the offers of the OTAs. A recent study conducted by a web analytic firm ascertained that travellers visit up to 21 sites before booking hotels for their travel itinerary.

In a world where time is money, several companies swooped in on the opportunity to provide even greater value to the users. Travel Meta Search Engines began popping up on the internet that allowed one to compare the OTAs themselves.

Once again, while the value provided by these Meta Search Engines to the consumers is undeniable, an indirect benefit is also made available to the small independent hotels. They finally found a place to showcase their brand and focus on the direct-response sales, rather than helplessly depending on large OTAs.

In the previous year, we saw Priceline acquiring Kayak, Expedia acquiring the German meta-search engine Trivago and purchase stakes in Room77, Trip Adviser deciding to go full Meta and here in India, MakeMyTrip.com acquiring a 19.9 per cent stake in Ixigo, an Indian Meta-search. This behaviour of OTAs more than validates the significance of meta-search engines in the travel and accommodation industry.

For most meta-search engines, the preferred revenue-generation model is that of advertising as opposed to commissions. This allows the hotels to better integrate their digital marketing strategies with their distribution strategies, while retaining a greater control over their room rates.

Rather than paying to feature more prominently on OTAs as well as losing money on commissions, independent hotels can now shift their marketing spend on featuring prominently on hotel meta-search engines, enabling them to lower the cost of distribution.

The inability of hotels to barricade themselves in an OTA price war is also overcome by effective use of marketing oneself on hotel meta-search engines. That way the hotels hold the power to let go of an OTA that is not willing to come to terms.

More pertinently, Hotel meta-search engines are able to provide additional value to the end users as well, which will prove beneficial to the smaller independent hotels in a number of ways:

– Compared to OTAs, Meta Search Engines such as Google Hotel Finder and Trip Advisor offer more information about the hotel. Hotels are more than just a place to stay. They are a place for creature comforts and getting pampered. An extensive photo album on these Travel Meta Search Engines would do more to assure the consumer of his choice and may even convince a guest to extend his budget to stay at your hotel. Trip Advisor even lets the users upload photographs, which lends more credibility to the claims of the hotel and its reviews because consumers view those photographs without the prejudice that is often associated with professional shots.

– Listings on OTAs tend not to showcase your entire range of offerings, packages and deals. Users may consider even simple things like free Wi-Fi, complimentary spa sessions and pool access while sealing the deal. Inability to find those packages might just turn into a deal-breaker. But now every hotel has the opportunity to exhibit its entire range of packages, deals and offers to a much larger audience which would otherwise have gone unnoticed. This also provides an opportunity to create more personalised packages based on trends and seasons which would not go unnoticed.

– Just as the OTAs, these Travel Meta Search Engines provide reviews for hotels which the consumers tend to trust slightly more simply because they are operating in an informative environment instead of a sales environment.

– Meta Search Engines act as semi-social networks and provide a greater incentive to the users to upload their photographs and post positive reviews.

– And most importantly, the greatest customer value provided by the Meta Search Engines is the flexibility offered to the consumers to not merely choose the property they want but also the means of booking the same. This means that consumers can choose from a range of OTAs and your own website. As consumers, one would definitely think that the best information and deals are bound to come directly from the source itself, i.e. the hotel’s website. As an accommodation provider, that means that there are greater chances that a prospective guest will decide to book through your hotel’s website. The more you can manage to divert traffic towards the direct booking engines on their website from the meta-search engines, the broader your margins become on each booking.

The pace at which technology is changing, it is hard to exactly predict what the future holds. But one thing that we can be certain of is that more and more channels are going to open up for independent hotels for shifting inventory at lower costs. Both OTAs and Meta Search Engines are going to move towards providing the end-users a richer and more personalised experience. Ultimately, it all boils down to using all these channels in an effective manner to create a highly integrated marketing strategy which results in maximum conversions. The need of the hour is for independent hotels to be more responsive to these new technological offerings and adopt the ones which result in converting clicks into bookings.

The OTAs were quickly able to dominate and establish monopoly in the travel market because they offered unparalleled convenience to the end-users that did not exist prior to their conception. This monopoly allowed them to charge high commissions and insist on rate parity. The lack of alternatives forced the smaller accommodation-providers to compromise on both these counts. But with the introduction of Hotel Meta Search Engines and the superior value they provide to the consumers by way of richer information and more importantly from an unbiased standpoint, are finally giving small operators a chance to give a tough competition even to the larger hotel chains.

Technology is finally proving to be the David’s sling. The question that remains for the accommodation providers is whether they learn to use it effectively or not.