Despite his precommitments, maestro Chaudhuri put his heart and soul and time into the planning, choreography and execution of the performance for the Indian President as if his life depended on it. 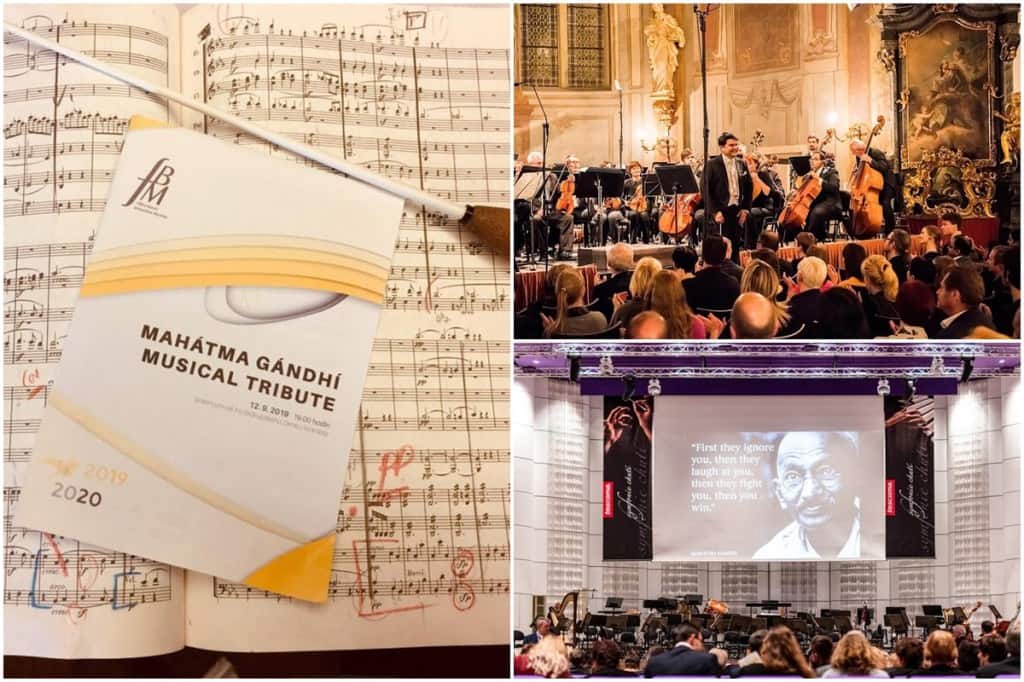 Clearly, maestro Chaudhuri is a Symphonic conductor with a very original blend, depth and temperament and an enormous scale of repertoire that makes his presence on the podium distinctive. (Images Credit: Debashish Chaudhuri)

No sooner had I landed in Prague in July 2018, as Indian Ambassador, the State visit of the President of India was due. It was decided, among other things, that the President would address the Indian community, in addition to the usual government to government engagements. How to liven it up? The name of India-Czech maestro Debashish Chaudhuri was given.I requested a meeting with the maestro. The rest is history.

Within five minutes of my meeting with Mr Debashish Chaudhuri, much younger to me, I realized he was no ordinary Indian. I was face to face with a highly intelligent, dynamic, suave, sensitive, and a very promising artist, who wore his fame lightly.

Born in 1975 in Calcutta India, Debashish Chaudhuri was the first Indian to study at the Prague Conservatory and the Chigiana Academy of Music in Siena, Italy with Gianluigi Gelmetti whose mentors included Sergiu Celibidache, Franco Ferrara and Hans Swarovsky. Chaudhuri is the only Indian to have studied at the academy since Zubin Mehta. He won the Conducting Competition of Lausanne, Switzerland in 2004 and a year later was the first Indian ever among the finalists of the prestigious Besancon Conducting Competition, remaining professionally active in Central Europe ever since. He has worked with several leading European orchestras such as BBC Wales, the Prague Philharmonia PKF, Brno Philharmonic, Czech Chamber Orchestra Pardubice, Plzen Radio Symphony, South Bohemian Chamber Philharmonic, Karlovy Vary Symphony, Hradec Kralove Philharmonic, Zlin Philharmonic, Moravian Philharmonic, State Philharmonic Zilina and others.

Despite his precommitments, maestro Chaudhuri put his heart and soul and time into the planning, choreography and execution of the performance for the Indian President as if his life depended on it. He would contact me to sound out his ideas-he need not have-I had put the matter entirely in his good hands.

And magic he created. As the Indian President arrived at the event, everyone rose to the Indian national anthem played out by the maestro’s completely foreign western classical orchestra. After my welcome address and the President’s speech, everyone was in for a surprise. Four smart Czech nationals, two women and two men, came and stood right in front of the President and sang old Bollywood songs set to Chaudhuri’s music. As they finished, everyone was up on their feet. Even before the event ended, the performance had gone viral on social media across continents! How imaginatively maestro Chaudhuri choreographed the performance, with his finger fully on the nerve of the distinguished guests. This and other meticulously held meetings and site visits made a deep impression on the Presidential delegation during the State visit. After returning to India, Sanjay Kothari, the Secretary to the President called me and said, ‘the President wishes to congratulate you on a flawless visit’.

Prior to the State visit, at the Indian Independence Day flag hoisting ceremony, maestro Chaudhuri heard me speak of the planned Bapu@150 events. He immediately came up with the idea of doing a series of concerts to spread the teachings of the Mahatma. I put all my weight behind him. Over the next one-year period, four special concerts were held in four cities including Prague, and Karlovy Vary, to packed audiences. Bapu’s message went out loud and clear.

Gurudev Tagore is another Indian known to the Czechs. He had visited the country and held lectures. His bust has been installed at a square in Prague, Thakurova square, where the Bengali community from India and Bangladesh gather every year in May, Gurudev’s birth month. Tagore’s teachings also became the leitmotif of the maestro’s concerts. Once again, I had no hesitation in supporting the maestro’s noble efforts for the first Asian who won the Nobel Prize for literature! What a way to spread Indian thought than through a medium the western audiences understand best, the Western Classical music.

Clearly, maestro Chaudhuri is a Symphonic conductor with a very original blend, depth and temperament and an enormous scale of repertoire that makes his presence on the podium distinctive. Besides the regular repertoire, he passionately explores music that is either inspired by India and Asia or written by Asian composers. This has enabled him to premiere several of original programs and recordings to critical acclaim such as the Colours of Asia concerts, the highly acclaimed commemorative concerts onRabindranath Tagore as well as Mahatma Gandhi, both of which showcased rare Symphonic works connected to India. Maestro Chaudhuri serves on the governing body of the Antonin Dvorak Music Festival as well as The International Talentinum Festival. He took the Martinu Czech Philharmonic on tours of India as the first Czech orchestra in India after 57 years! These tours were in 2016 and 2018.

In 2021 his newly released CD contained among others, the world premiere of a lost and forgotten work, Liebeslieder von Rabindranath Thakur, composed by Czech composer J. B. Foerster in 1915 was noticed by the BBC London’s prestigious record reviews to rave reviews and hailed as a real discovery. In 2021 another CD was also released by maestro Chaudhuri recorded at the BBC containing another series of premieres of the now nearly forgotten works of John Mayer, the legendary composer from Calcutta who in the early 1950s became the first ever non-European violinist at a major professional English Symphony Orchestra. Mayer was a student of Mehli Mehta as well, who was Zubin Mehta’s father.

Indians abroad are an asset. They can open doors. Within days of my arrival, a full-page interview of mine, along with my life size photo,was published in a local Czech newspaper, facilitated by the Bharat Sangh, Indian community organization. Subsequently, during the tete a tete with Czech President Mr Milos Zeman at the credentials ceremony, the latter congratulated me repeatedly on the interview, a copy of which he was holding in his hand. I had arrived. The Organization also helped me put together a list of eminent Indians across all sectors and regions in the country that would later be addressed by the Indian President. It is at this event that the maestro was to weave his magic.

As I was concluding my tenure, I received a message from India seeking suggestions for the Indian Diaspora Award for 2021; I had no hesitation in nominating maestro Chaudhuri for the Pravasi Bharatiya Samman Award, in the field of art and culture. On checking with my colleagues in Delhi, I was told that the nomination had been ‘very well received’, the field being so rare among the diaspora! I knew this was a winner.

The maestro puts his talent and outreach to use in philanthropy. In 2006, he started a series of charity concerts for the International Day of the Visually Impaired under the Lions Club, which is now in its 15th year. I had occasion to attend the charity concert that he did for Sri Lanka, on the request of the Czech Foreign Ministry. Maestro Chaudhuri also supports a variety of other charitable organisations and even personally sponsors an Indian student each year to study higher music in the Czech Republic for a limited duration. He is married to Czech pianist Jana and his parents still live in Calcutta, India while his brother is an acclaimed Fine arts painter in Denver, Colorado.

Maestro Chaudhuri is a rare Indian gem abroad and an invaluable asset of India overseas. What better way to bring nations closer than through the medium of the genre of music that they understand the most! Indian authorities would do well to track the future course of maestro Debashish Chaudhuri’s career and bestow appropriate recognition befitting his substantive contributions.

(The author is a former Indian Ambassador to Czech Republic. Views expressed are personal and do not reflect the official position or policy of Financial Express Online.)