Leisure: Reimagining the libraries of future

The Infinite Library, a virtual reality project, visualises the future of libraries in the world. 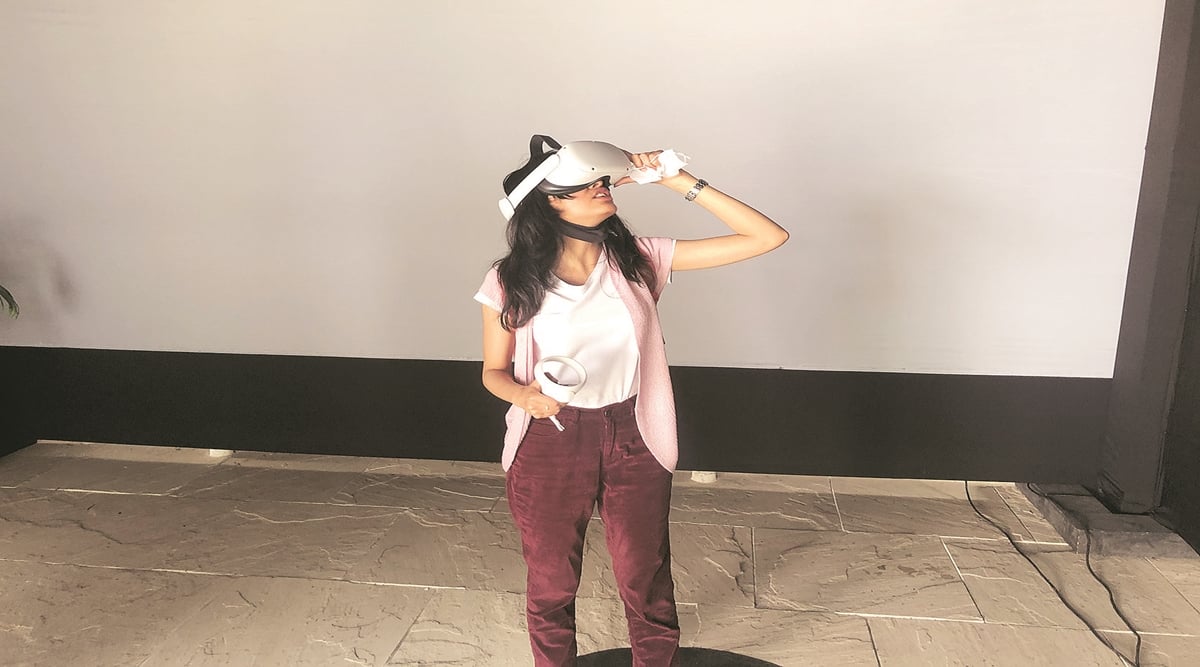 The VR installation was called VRwandlung (wandlung means ‘transformation’ in German, the language in which Kafka wrote).

In the autumn of 2019, a new virtual reality (VR) installation arrived in India to the joy of fans of the new technology in the country. This VR artwork was especially important to book lovers. It was Franz Kafka’s The Metamorphosis in VR. Headset-wearing visitors virtually entered the room of Kafka’s character Gregor Samsa, a travelling salesman who wakes up one morning as a giant bug, to land their eyes on a litany of objects such as a writing desk, a book shelf, an alarm clock and even a snow globe. The VR installation was called VRwandlung (wandlung means ‘transformation’ in German, the language in which Kafka wrote).

Three years later, the Goethe-Institut/Max Mueller Bhavan in New Delhi, the venue of VRwandlung, welcomed another VR installation—not based on a book this time, but an entire library.

The Infinite Library, a travelling VR installation mounted at the Goethe-Institute during March 23-27, adopts ‘transformation’ —the name of The Metamorphosis in VR —as its calling card to visualise the future of libraries. The virtual library gathers an entire gamut of new technologies like holograms, 3D-printed objects and QR codes to reimagine libraries in the 21st century. “Libraries can be myths and also characters. They can continue to be reimagined,” says Mika Johnson, creative director of The Infinite Library.

Incidentally, it was Johnson, a Finnish-American multimedia artist based in Prague, who was behind Vrwandlung too. “The idea for The Infinite Library was born here in Delhi during The Metamorphosis VR installation,” he says about the ‘transformation’ of a book into VR that inspired the artwork about the changing face of libraries. While VRwandlung had its world premiere in Prague, the home city of Kafka, The Infinite Library premiered in Delhi, with a stopover in the capital of Czech Republic at the end of April before a long world tour.

Johnson’s VR library is also inspired by Argentinian writer Jorge Luis Borges’ The Library of Babel. “Borges created a myth about a library that was infinite,” says Johnson about the 1941 short story that saw the library as a universe. In The Infinite Library, the universe tells its own story. Space dust narrates the origins of the earth and asteroids talk about human evolution. “Our goal is to host different kinds of knowledge systems that can’t go into books,” says Johnson.

The Infinite Library is a travelling exhibition that will be held in Prague (April-May) and Dublin (July) following Delhi and Bangalore (March 31-April 4). In September-October this year, it will be on a South Asia tour of cities such as Mumbai, Pune, Chennai, Kolkata, Dhaka and Karachi.

The knowledge systems are packed into a virtual cave that houses the infinite library. Wearing a VR headset, a visitor is invited to enter the cave and begin tapping into its vast resources by pointing a virtual lightsaber. There is a beach to arrive at and a canoe to examine while shellfish pass by with total abandon. “Caves are where we find the first forms of symbolic expression, beginning around 70,000 years ago,” says Johnson. “They were our first libraries, spaces where our culture incubated,” he adds.

The installation has a main virtual library a visitor can experience by wearing a headset and standing in a sandbox holding hand controllers. There are three separate mini-libraries, called Library of Shadows containing leather puppetry from Karnataka, Library of Elements with medieval European alchemy, and Library of Navigation showing the accumulation of knowledge using oral tradition by Polynesian navigators before compasses and sextants arrived. There are also jars with QR codes containing 3D-printed objects like fishbones, mushrooms and skulls that a visitor can scan to hear stories of human evolution.

“Every library is an experiment on infinity. Knowledge is a breakthrough of all limitations,” says Berthold Franke, director, Goethe-Institut/Max Mueller Bhavan. “Virtual reality is a new space, a new way to describe the world and a new way for artists to express themselves. It is only a new technology and may help in new ways of creating things,” he says, adding: “But it is not a technology by itself that creates. It is us using tools.”

VR as a tool is embraced not only by libraries, but also museums and film festivals eager to expand the viewer’s experience. While museums like Louvre in Paris, The Tate Modern in London and The Smithsonian in Washington have organised exhibition with VR elements, at least five major international film festivals (Venice festival, Tribeca festival in New York, South by Southwest festival in Austin and Sundance festival in the United States, and Red Sea festival in Saudi Arabia) have made VR artworks an integral part of their programming.

Faizal Khan is a freelancer.

Follow us on
Latest News
Leisure: In good spirits, now & always
Global Warning: Extreme weather conditions are sweeping large parts of the world
Well Being: Think before you drink
A Chinese affair: Eclectic food, enchanting ambience & the story of unrequited love come together at the newly reopened House of Ming
Novel sporting: We bring you the newly-introduced sports in Asian Games and Paris 2024 Olympics
Philosophy marries mythology | Book review: ‘The Stories We Tell’ by Devdutt Pattanaik
A happy life: The pandemic brought social support & honesty in govt as crucial for well-being of nations
Most Read
The graveyard nation | Book review: ‘The Comrades and the Mullahs’ by Stanly Johny & Ananth Krishnan
Well Being: How fat is your liver?
In midnight order, HC orders stay on Tajinder Bagga’s arrest till May 10 after Mohali court issues fresh warrant
5 financial gifts you can opt for your mother’s financial security this Mother’s Day
Photos
World’s largest white diamond – ‘The Rock’, goes up for auction; see stunning images
1 day agoMay 6, 2022
Eid-Al-Fitr 2022: BSF and Pak rangers exchange sweets at at outposts along International Border – See photos
4 days agoMay 3, 2022
In Pictures – Muslims around the world celebrate Eid-Al-Fitr 2022
4 days agoMay 3, 2022
Read More
×
Covid-19: At 1,407, Delhi records slight drop in fresh infections; positivity rate declines to 4.72%
The Asteroid that caused dinosaur extinction on Earth was hit at this location
‘Dilli Ki Raat’ redefined: A roadmap for Delhi’s night economy
Earthquake damages over 80 houses in Pakistan’s Balochistan
WHO Covid death report ‘baseless’, attempt to ‘tarnish’ India’s image, say health ministers
Mother’s Day – Styling tips to unique gifts: How to celebrate Mother’s Day on a budget