Holi 2022 Date: When is Holi and Holika Dahan this year, know the Muhurta and its importance 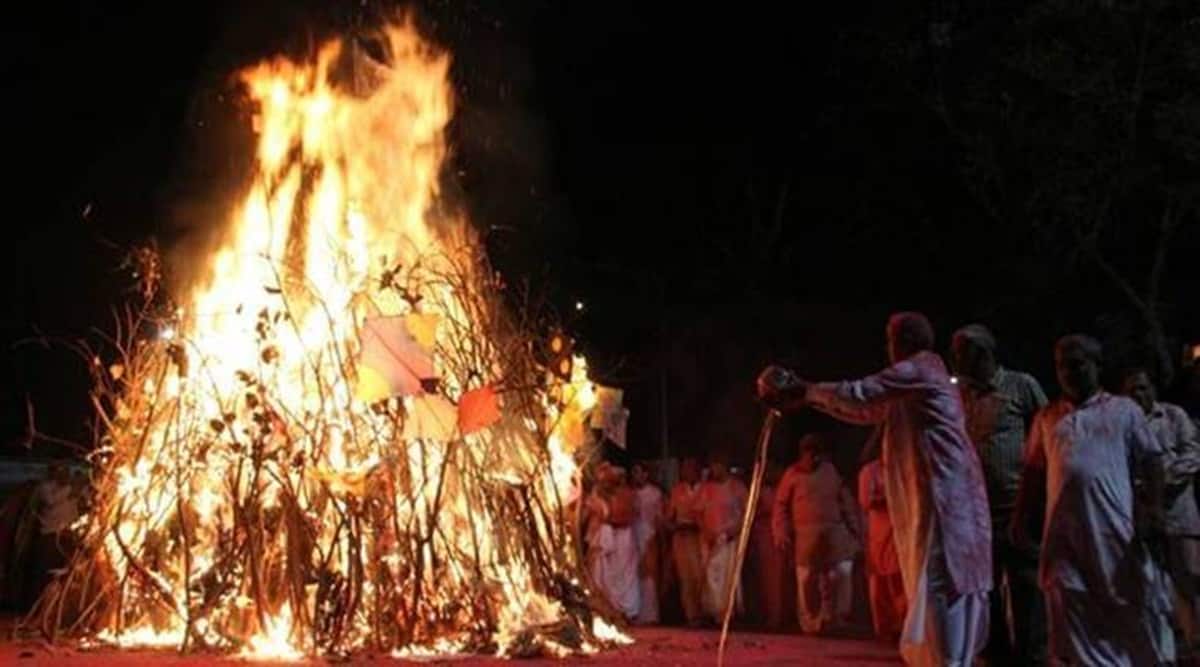 Holika Dahan symbolises the victory of good over evil and is Celebrated a day before the rangwali Holi. The night before Holi, people make Holika pyres made of wood and cow dung and burn it and pray to God for fulfillment of their wishes pyres made of wood and cow dung and are burnt in North India, Nepal and parts of South India in keeping with this tradition. The youth playfully steal all sorts of things and put them in Holika pyre. In some parts of India the day is actually called Holika Dahan.

Holika Dahan is observed on the full moon day of Hindu month Falgun. This year, the Holika dahan will be held on Thursday 17th March 2022, Holika Dahan muhurta 9.06 pm to 10.16pm

The root of celebration of Holika Dahan is in the legend of Lord Vishnu’s devotee, Prahlad and his demon father, Hiranyakshyap. It is from this story we got the name of this festival ‘Holika Dahan’

The legend says, once lived a devil and powerful king, Hiranyakshyap who considered himself a God and wanted everybody to worship him and who considered Lord Vishnu his mortal enemy as the latter had taken the Varaha avatar to kill his elder brother Hiranyaksha. His son, Prahlad was an ardent devotee of Lord Vishnu As per Hindu texts, there was a boy named Prahlada born to demon king Hiranyakashipu and his wife, Kayadu. While the little boy was in his mother’s womb, he heard about the Lord Vishnu and his supreme power through Saga Narada.

As the boy was born and grew a little older, he started worshipping Lord Vishnu. This didn’t go down well with his father, and he tried multiple ways to kill his own son. For unversed, King Hiranyakashipu had a vardan that made him invincible. He was granted a vardan that he couldn’t be killed either by an animal or man, couldn’t be killed inside or outside of the house, he couldn’t be killed during the day or night, he couldn’t be killed on land or in the air and by any man-made weapons. This boon made him very arrogant and cruel.When he got to know about his son’s devotion towards Lord Vishnu, he made several attempts to kill Prahalad. However, the little boy survived each attack unhurt. After seeing all this, he resorts to his sister Simhika (Holika) to help him kill his son. Sumhika agreed to help him as even she was granted a boon from Lord Brahma that no fire can burn her. Holika had received a boon that she cannot be killed by fire and She had a divine shawl that protected her from fire. A day before Holi, she lured Prahlad to sit on her lap while she was sitting on the bonfire wearing the divine shawl. But as the fire lit Prahlad prayed to Lord Vishnu to keep him safe so Lord Vishnu summoned a gust of wind to blow the shawl off of Holika and on to Prahlad and saving him from the flames of the bonfire and Simhika (Holika )was burned down to ashes despite wearing the divine shawl. This incident left Hirnakashipu shaken and asked his son to prove his devotion. He asked if his lord exists in the pillar, to which Prahlada said ‘yes’. On hearing this, the king broke the pillar, and to his horror, a half lion and half man came out of it.

The half-man and half-lion were Lord Vishnu in Narasimha avatar to kill the demon. Keeping all the parameters in mind, Narasimha tore his torso apart with his bare nails at twilight. Ever since then, Narasimha’s avatar is widely worshipped across the nation, and the day was celebrated as Holika Dahan. In the memory of this event, there is this canon of performing Holika Dahan (burning the bonfire considering Holika). The festival of Holi gives a message that this is how Almighty stays available to protect His devotees and the victory of good over evil.

(The author is Chairman, Khanna Gems. Views expressed are personal and do not reflect the official position or policy of Financial Express Online. )