Hindu Marriage Act: Married without taking ‘saath pheras? Find out if your marriage is legally valid!

Now, coming back to our question on whether a marriage without ‘Saath pheras’ is legally valid as per Hindu law, the answer is ‘Yes!’, provided the marriage was conducted as per the rites of either the bridegroom or the bride and with their consent. 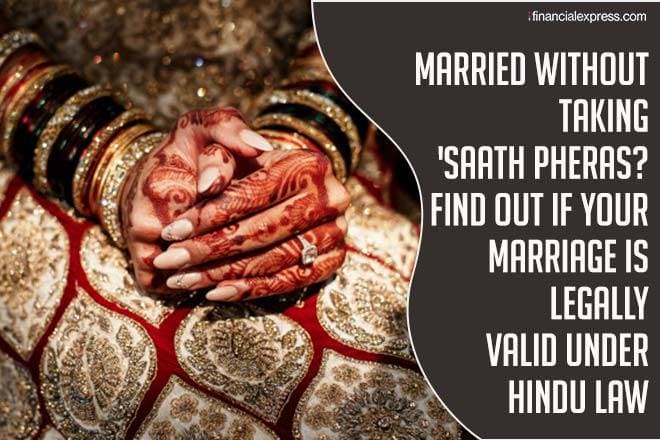 Now, coming back to our question on whether a marriage without 'Saath pheras' is legally valid as per Hindu law, the answer is 'Yes!', provided the marriage was conducted as per the rites of either the bridegroom or the bride and with their consent.

What if you are a Hindu couple who got married without observing the ceremonial ‘saath pheras’ ? Then you may want to find out if your marriage is valid as per the Hindu Marriage Act. Don’t panic, there are laws that safeguard your rights according to your personal law.

A case on this issue came up last June at the Bombay High Court, where the importance of ‘Saptapadi’ or the ceremony of the seven pheras came up as an essential ceremony to constitute a valid Hindu marriage.

The case brought up an interesting question as to whether taking the ‘saath pheras’ is essential to establish the legal validity of a Hindu marriage. In this case, the marriage of a Hindu couple took place without the ‘Saptapadi’ and therefore, specific provisions of a Hindu Marriage Act relating to the same are relevant here.

Coming to the facts of this case, the counsel of appellant-husband argued before the Bombay High Court that section 7 of the Hindu Marriage Act 1955 necessitates the Saptapadi ceremony (taking seven pheras around the sacred fire). It was also argued as follows:

1. Instead of taking seven steps around the sacred fire, they took steps around a bundle of aggarbatti sticks which were burnt.

2. The priest who solemnized their marriage is not a regular ‘Poojari’ of the Hanuman temple and did not visit the temple on a regular basis.

Given the nature of the dispute, the evidence of the priest was examined very carefully by the courts and here’s a summary of his side of the story:

1. The bride and bridegroom, along with their family members, came to solemnize the marriage as per Hindu customs in the temple.

3. The priest had not known about the ‘Saptapadi’ ceremony and therefore, he had not conducted it. However, the bride and bridegroom had taken seven steps around a bundle of agarbattis (incense sticks) that were burnt.

The Bombay High Court observed as follows in this case: ”If in fact, the marriage was solemnized by force, there would no question of the two persons cohabitating with each other for so long and that too by having a physical relationship.”

Some observations put forward by the petitioner include:

”What is a sacred fire has not been defined in the Act.”

“Sindoor was put by the Appellant (bridegroom) on the Respondent (bride) and he garlanded her.”

The Bombay High Court dismissed the husband’s appeal seeking his ‘nullity’ of this marriage that took place on 14 February 2009.

In S. Nagalingam vs Shivagami, 2001 7 SCC 487, the question came up whether ‘Saptapadi’ is an essential ritual for the validity of Hindu marriage in the case of a second marriage. While holding that a second marriage as indicated in this case is not valid as per Hindu law, the Supreme Court also held as follows:

1. A Hindu marriage may be solemnized in accordance with the customary rites of either party (bridegroom or bride).

2. Even a simple ceremony of exchanging garlands, tying a thali (mangalsutra) or putting a ring upon the finger is sufficient to constitute a valid Hindu marriage.

Given that the dispute is around what constitutes a Hindu marriage, here are some interesting facts to know:

Marriage as a Sacrament under Hindu Law

According to Hindu law, marriage is a sacrament, not a contract. So, what are the characteristics of sacramental marriage as per Hindu law? It is as follows:

1. It is a permanent and indissoluble union.
2. It is an eternal union.
3. It is a holy union.

Note that these three characteristics have been done away with because

1. Divorce is now legally recognized as per Hindu law.

2. This was done away with in 1856 when widow remarriage was given statutory recognition.

3. This may still remain in the context of the ceremonies that are a part of the Hindu marriage ceremony.

Although the ceremonial aspect is the least important characteristic of a sacramental marriage, the ‘Saptapadi’ or taking the ‘saath pheras’ is considered the most sacred of the nuptial ties, rendering the marriage ‘complete’ and ‘irrevocable’ in law.

Now let’s come to a tricky question: What if a Hindu couple gets married to each other without taking the ‘saath pheras’? Is their marriage null and void?

Another important point to note is that as per the Hindu Marriage Act if a marriage has been solemnized by customary rites and ceremonies of at least one party (either the bridegroom or the bride), the marriage will be considered valid.

What if a Buddhist or a Jain solemnize their marriage in accordance with the Sikh ceremony?

Further, Section 144 of the Indian Evidence Act states that where solemnization of a marriage is not available, it can still be proved to be a valid marriage by continuous cohabitation (living together as husband and wife) by the parties concerned. In such a situation, the person who challenges the validity of the marriage has to prove it in court.

Now, coming back to our question on whether a marriage without ‘Saath pheras’ is legally valid as per Hindu law, the answer is ‘Yes!’, provided the marriage was conducted as per the rites of either the bridegroom or the bride and with their consent.