Prime Minister Kim Boo-kyum said during a virus meeting that the country could be forced to take “extraordinary” measures if the virus doesn’t slow soon. 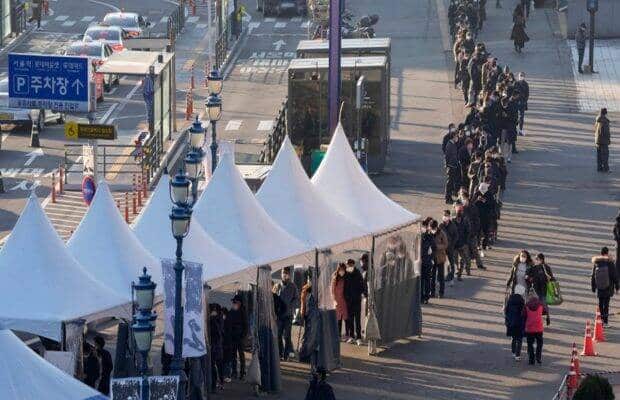 New coronavirus infections in South Korea exceeded 7,000 for the third consecutive day on Friday in a record-breaking surge that has crushed hospitals and threatens the country’s goals to weather the pandemic without lockdowns. Prime Minister Kim Boo-kyum said during a virus meeting that the country could be forced to take “extraordinary” measures if the virus doesn’t slow soon. Officials issued administrative orders requiring hospitals around the country to designate 2,000 more beds combined for COVID-19 treatment.

Kim said the government will also speed up the administration of booster shots by shortening the interval period between the second and third vaccine injections from the current four or five months to three months starting next week.The delta-driven spread in recent weeks has been accompanied by a spike in hospitalizations and deaths, many among people in their 60s or older whose immunities have waned after being inoculated early in the vaccine rollout that began in February.

Officials tightened restrictions starting Monday, banning private social gatherings of seven or more people in the greater capital area and requiring adults to verify their vaccination status at restaurants and other indoor venues. But Kim said such measures haven’t yet showed an effect in slowing transmissions.

“If it becomes clear that we aren’t succeeding in reversing this crisis situation within the next few days, the government will have no other choice but to employ extraordinary anti-virus measures, including strong social distancing,” said Kim, South Korea’s No. 2 behind President Moon Jae-in.

Deputy Health Minister Lee Ki-il said officials may further reduce the limit on social gatherings and restore business-hour restrictions at restaurants and bars that were lifted in November if things continue to look bad next week.“We will try our best to avoid a lockdown,” Lee said during a briefing.

The Korea Disease Control and Prevention Agency said around 5,300 of the 7,022 new cases reported Friday were from capital Seoul and the nearby metropolitan area, where the virus has hit hardest. The country’s death toll is now at 4,130 after 53 virus patients died in the past 24 hours, while 852 others were in serious or critical conditions.

South Korea has also tightened its borders to fend off the new omicron variant since identifying its first cases last week that were linked to arrivals from Nigeria. The KDCA said health workers confirmed three more omicron infections on Friday, bringing the tally to 63. Scientists say it’s not yet clear whether omicron is more contagious or dangerous than previous strains of the virus.