The 5,352 new cases reported by the Korea Disease Control and Prevention Agency on Saturday marked the third time this week the daily tally exceeded 5,000. 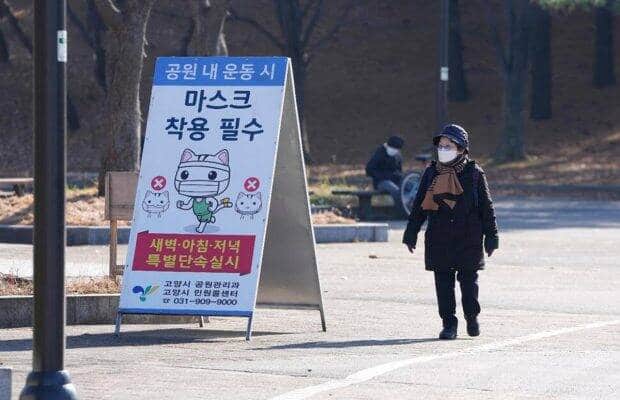 A visitor wearing a face mask as a precaution against the coronavirus, walks near a banner at a park in Goyang, South Korea, Saturday, Dec. 4, 2021. (Photo source:AP)

The 5,352 new cases reported by the Korea Disease Control and Prevention Agency on Saturday marked the third time this week the daily tally exceeded 5,000.

The country’s death toll was at 3,809 after a record 70 virus patients died in the past 24 hours, while the 752 patients in serious or critical conditions were also an all-time high.

As the delta-driven surge threatens to overwhelm hospital systems, there is also concern about the local spread of the omicron variant, which is seen as potentially more infectious than previous strains of the virus.

The country’s omicron caseload is now at nine after KDCA confirmed three more cases. The new cases include the wife, mother-in-law and a friend of a man who caught omicron from a couple he drove home from the airport after they arrived from Nigeria on November 24. The couple’s teenage child and two other women who also traveled to Nigeria have also been infected with omicron.

Officials say the number of omicron cases could rise as some of the patients had attended a church gathering involving hundreds of people on November 28. While the emergence of omicron has triggered global alarm and pushed governments around the world to tighten their borders, scientists say it remains unclear whether the new variant is more contagious, more likely to evade the protection provided by vaccines or more likely to cause serious illnesses than previous versions of the virus.

Starting next week, private social gatherings of seven or more people will be banned in the densely populated capital Seoul and nearby metropolitan areas, which have been hit hardest by delta and are now running out of intensive care units.

To fend off omicron, South Korea has required all passengers arriving from abroad over the next two weeks to quarantine for at least 10 days, regardless of their nationality or vaccination status. The country has banned short-term foreign travelers arriving from nine African nations, including South Africa and Nigeria.