According to the North’s anti-virus headquarters, 56 people have died and more than 1.48 million fell ill amid a rapid spread of fever nationwide since late April and outside experts believe most of the illnesses to be COVID-19. 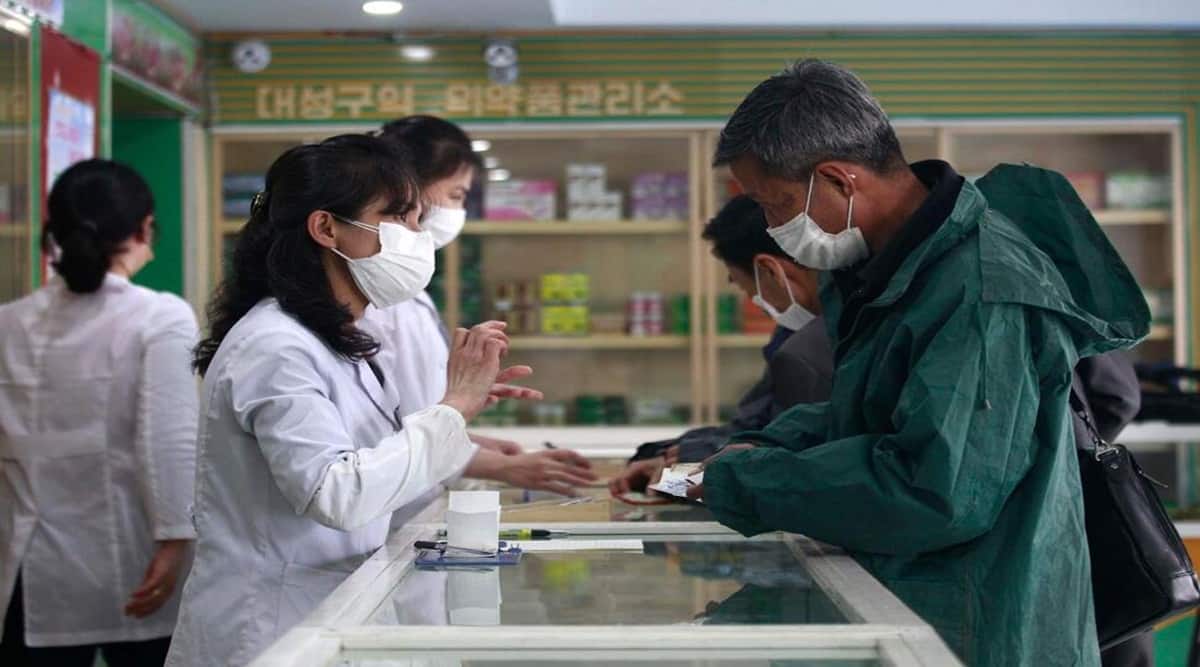 Employees of the Medicament Management Office of the Daesong District in Pyongyang provide medicine to residents as the state increases measures to stop the spread of illness in Pyongyang, North Korea, Monday, May 16, 2022. (Photo source: AP)

Health officials in North Korea found 269,510 more people with feverish symptoms and reported another six deaths, state media said Tuesday, as the country grapples with an escalating but largely undiagnosed COVID-19 outbreak across its unvaccinated population.

According to the North’s anti-virus headquarters, 56 people have died and more than 1.48 million fell ill amid a rapid spread of fever nationwide since late April and outside experts believe most of the illnesses to be COVID-19. The North said at least 663,910 people were still in quarantine.State media isn’t specifying how many of the fever cases have been confirmed as COVID-19.

North Korea likely lacks testing supplies to confirm coronavirus infections in large numbers and its virus response is mostly isolating people with symptoms at shelters.Failing to slow the virus could have dire consequences for North Korea, considering its broken health care system and that its 26 million people are believed to be unvaccinated.

The country also grapples with malnourishment and other conditions of poverty and lacks public health tools, including antiviral drugs or intensive care units, which suppressed hospitalisations and deaths in other countries.Some experts suspect that North Korea is underreporting its death toll to soften the blow on the leadership of authoritarian leader Kim Jong Un, who even before the outbreak was navigating his toughest moment in a decade in rule, with the pandemic unleashing further shock on an economy broken by mismanagement and US-led sanctions over his nuclear ambitions.

The North’s fatalities may surge in coming weeks considering weekslong intervals between infections and deaths.After maintaining a widely doubted claim for two years that it had perfectly kept the virus out of its territory, North Korea acknowledged domestic COVID-19 infections last week, saying that an unspecified number of people in capital Pyongyang tested positive for the fast-moving omicron variant.

Describing the outbreak as a “great upheaval,” Kim imposed the country’s maximum preventive measures that restricted the travel of people and supplies between cities and counties.More than a million public health officials, teachers, and medical students have been mobilized to identify people with fevers so they could be quarantined. Kim during a ruling party meeting on Sunday also ordered his military to get involved in the pandemic response in Pyongyang, raising concern that medicine supplies aren’t arriving at pharmacies in time.

North Korea’s official Korean Central News Agency said Tuesday Korean People’s Army on Monday started to deploy officers and non-commissioned officers from its medical units to help with the transport of medicine to pharmacies in Pyongyang, which began to stay open 24 hours a day to deal with the virus crisis. Experts say the country’s extremely strict border closures may have staved off a huge outbreak until now.

It’s unclear whether the North’s admission of an outbreak communicates a willingness to receive outside help. The country has shunned millions of vaccines offered by the UN-backed COVAX distribution program, likely because of international monitoring requirements attached to those shots.South Korea has publicly offered to send vaccines, medicine and health personnel, but North Korea has so far ignored the proposal amid icy relations between the rivals over a stalemate in larger nuclear negotiations between Washington and Pyongyang.Some experts say Kim’s praise of China’s pandemic response during a virus meeting last week indicates that the North would be more willing to receive help from its main ally.