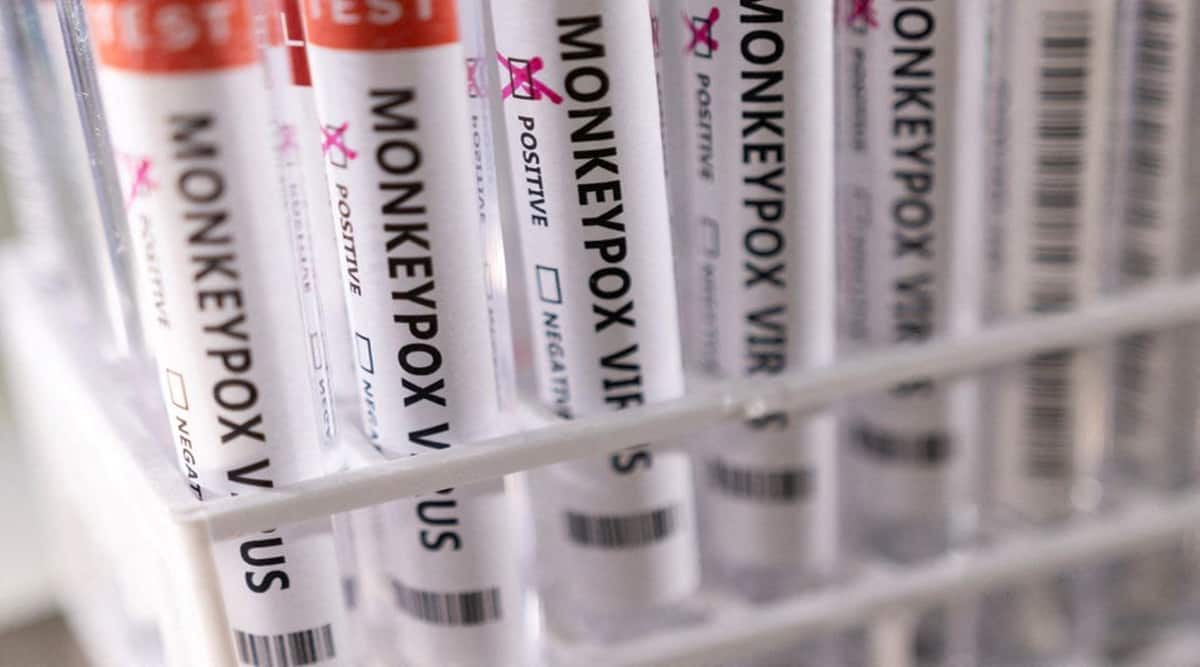 The authors in the paper also gave information on different smallpox vaccines which can be used off-label for preventing monkeypox. (Representational image: Reuters)

Amid a monkeypox outbreak in several countries, researchers here have said that the possibility of the disease becoming a pandemic is low, and that the virus can be contained by strong surveillance, isolation of confirmed cases, contact tracing, and ‘off-label use’ of smallpox vaccines for ‘ring vaccination’.The group of public health and infectious diseases researchers said that the emergence of monkeypox disease in non-endemic areas is a reminder that infectious diseases and pathogens are not restricted by the geographical borders.

The health issue or emerging disease in one part of the world is a challenge for rest of the world as well, they said.They argued that even though no case has been reported from India so far, there is a need for better preparedness.The researchers said this in a review paper published in the prestigious peer-reviewed and high-impact factor journal ‘Indian Pediatrics’.

The review paper by epidemiologist and infectious diseases physician Dr Chandrakant Lahariya, and his team, examined the evidence of possibility of emergence of monkeypox cases in newer settings, and also reviewed the available therapeutics and vaccines.They also examined the possibility of the disease to evolve into a pandemic.Pointing out that the majority of monkeypox cases are being detected in men who have sex with men (MSM), the authors said the trend might be linked to an early care seeking by the people belonging to this group.They also mentioned the need to study the route of transmission of disease through sex, arguing that sexual contact is just a context which provides close physical contact, and thus an opportunity to spread.They said that monkeypox disease is unlikely to become a pandemic due to several factors, most importantly because it is not a new virus and has been present globally for five decades.They said there is a reasonable understanding of the structure, transmission, and pathogenicity of the monkeypox virus. In addition, the virus in most cases causes only mild illness, as evident from occurrence of zero deaths since the onset of the ongoing outbreak, the authors of the paper said.

Also Read
Covid-19 Vaccine Certificate: Here’s how to download it from CoWin portal, Aarogya Setu app
Aarogya Setu: From contact tracing to being the ‘health app of the nation’
Fresh Covid advisory issued in Uttarakhand following rise in infections
Why are recovered Corona patients experiencing stomach, gut pain? Check how to deal with post-Covid ailment

The researchers also said that the virus is less contagious and requires close personal contact to transmit, in contrast to SARS-CoV-2, which had a respiratory spread and a high proportion of asymptomatic cases.Another reason they gave was the availability of a few smallpox vaccines, which, they said, can be recommended for ‘off-label’ use and be produced in bulk across the globe.

Finally, they said that it is a relatively stable virus with a very slow rate of mutation.“It is in this backdrop, most experts on infectious disease believe that monkeypox outbreak would not turn into the pandemic.“There is every reason, as of now, to believe that a monkeypox outbreak can effectively be tackled and virus contained by isolation of confirmed cases, quarantine of contacts, and the use of authorised smallpox vaccines as ‘off-label’ for ‘ring vaccination,” the authors said in their paper.They, however, underlined that the vaccination of the general population is not currently recommended.

The authors also highlighted that the genome sequencing capacity that was strengthened during the COVID-19 pandemic could come in handy in tracking the clade and the chain of infection.However, considering that monkeypox is a DNA virus which has a slow rate of mutation, the repeated genomic sequencing has limited value, they said.

Moreover, MPXV genome has around 200,000 nucleotide bases, six times larger than the severe acute respiratory syndrome coronavirus 2 (SARS CoV-2), thus genomic sequencing is a bit harder, more time consuming, and expensive, and with the limited benefits, they said.The authors in the paper also gave information on different smallpox vaccines which can be used off-label for preventing monkeypox. They, however, said that mass vaccination is not needed in any setting.

The authors recommended that patients with high-risk for complications, including children and pregnant women, should be admitted to the hospital for closer monitoring and clinical care.For a pregnant woman, if she presents with mild and uncomplicated case, immediate hospital care is not recommended, they suggested. Though complicated cases need to be admitted immediately, the disease is no direct indication for Caesarean section for delivery, they said.

“No case of monkeypox virus and disease has been reported from India in the ongoing outbreak; however, there is a need for better preparedness. Strict surveillance at port of entry and early identification, isolation, and case management are the key to response.“Disease surveillance, contact-tracing and ring vaccination with available smallpox vaccines, authorised for off-label use for monkeypox, for prioritised affected population are the key strategies,” they said.The authors suggested that the outbreak in non-endemic countries should be used as an opportunity by India, and other countries, to strengthen their public health surveillance and health system capacity for outbreak and epidemic preparedness.