Nutmeg is used in recipes rich in spices and sugar. But it should be taken cautiously as it can induce hallucinations and a drug-like high 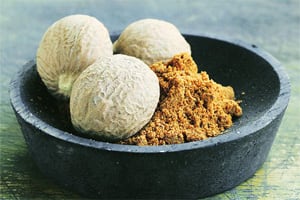 In these early days of the holiday season, as cooks begin sifting through recipes rich in spice and sugar, consider this small warning from toxicologists: Measure your nutmeg carefully.

Of all the well-loved seasonal spices, nutmeg stands out for its long and slightly twisted history. In the Middle Ages, it was used to end unwanted pregnancies. More recently, desperate prisoners embraced it as a rather miserable drug substitute. So, on occasion, have teenagers, some of whom wound up at poison control centres. A couple of years ago, a man in Sweden claimed that nutmeg had induced him to spit at strangers on the street.

“It’s not that nutmeg cases are that common,” said Leon Gussow, an Illinois toxicologist who publishes a blog for professionals called The Poison Review. “But toxicologists do recognise it as one of the more interesting spices in the kitchen.”

As Dr Gussow noted recently in Emergency Medicine News, awareness of the spice’s poisonous and exotic side effects has been around for some time. The spice trade first brought nutmeg to Europe in the 12th century, where it rapidly gained a reputation as a seed of unusual potency, strong enough to fight infection (including the Black Plague), stimulating enough to bring on menstruation, poisonous enough to induce an abortion. It also earned shady credentials for inducing a kind of hazy, druglike high that could include hallucinations.

The effect was potent enough that nutmeg mythology eventually became part of prison culture. In the 1965 book, “The Autobiography of Malcolm X,” the activist describes purchasing it from inmates in prison, concealed in matchboxes, and stirring it into water. “A penny matchbox full of nutmeg had the kick of three or four reefers,” he wrote.

Toxicologists say that description is somewhat misleading. It takes a fair amount of nutmeg — two tablespoons or more — before people start exhibiting symptoms. These can include an out-of-body sensation, but the most common are intense nausea, dizziness, extreme dry mouth, and a lingering slowdown of normal brain function. Dr Gussow said nutmeg experimenters have compared it to a two-day hangover.

“People have told me that it feels like you are encased in mud,” said Dr Edward Boyer, professor of emergency medicine and chief of the division of medical toxicology at the University of Massachusetts Medical School. “You’re not exactly comatose, but you feel really sluggish. And your remembrance of events during this time period is incomplete at best.”

The main chemical culprit in nutmeg is called myristicin which forms naturally in the seeds (and in other plants, occurring in trace amounts in carrots). Myristicin belongs to a family of compounds with psychoactive potential that occasionally are used to make much stronger psychotropic drugs. It has been included in recipes for MMDA. And it is chemically related to another compound, safrole, also found in nutmeg, which is sometimes used in the synthesis of the street drug Ecstasy.

Nutmeg incidents are rare — at least, those reported to the authorities. “We do see a few paediatric cases where parents left an open spice jar where a child could reach it,” said Dr Patrick Lank, an assistant professor of emergency medicine at the Feinberg School of Medicine at Northwestern University.

The rarity of the cases means that even though nutmeg information is available online, there is enough information about the negative effects that most people appear to avoid it anyway. “It’s clear that the stories on the Internet have not led to large numbers of nutmeg abusers turning up in emergency rooms,” Dr Boyer noted.

The usual holiday samplings of nutmeg — the dusting on eggnog or a cocktail, the quarter-teaspoon sprinkle that goes into a pie or cake — is not a risk to revelers. In those doses, the woodsy, sweet flavour should simply be enjoyed.

Nutmeg is the seed of an evergreen tree, Myristica fragrans, native to Indonesia. The spice mace comes from a thin protective layer that encloses that seed.

It was known to be strong enough to fight infection, stimulating enough to bring on menstruation, poisonous enough to induce an abortion. It also earned shady credentials for inducing a kind of hazy, druglike high that could include hallucinations.

Toxicologists say it takes two tablespoons or more before people start exhibiting the symptoms — an out-of-body sensation. But the most common are intense nausea, dizziness, extreme dry mouth, and a lingering slowdown of normal brain function.

The Chemical culprit in nutmeg is called myristicin. It belongs to a family of compounds with psychoactive potential that are used to make much stronger psychotropic drugs. It has been included in recipes for MMDA. It is chemically related to another compound, safrole, also found in nutmeg, sometimes used in synthesis of Ecstasy.