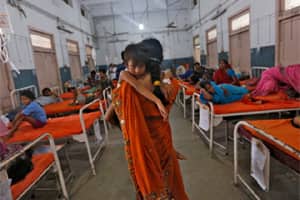 Last year, only about one tenth of the suspected adverse drug reactions India collected came from drugmakers, compared to 95 percent in the United States. (Reuters)

Within days of being given a diphtheria jab during a school vaccination drive, 5-year-old Meraj Shabbir Khan’s leg became so swollen that he was hospitalised.

In a cramped Mumbai pediatric ward, third-year pharmacology student Nitin Shinde opens the boy’s file and notes the vaccine, his age and the doctor’s diagnosis of a skin infection. That information is later logged into a computer program linked to a national database, part of India’s fledgling efforts to track, analyse and ultimately warn patients about unknown side effects of drugs on the market.

India’s six-year-old pharmacovigilance program, which collects and submits suspected adverse drug reactions to a World Health Organisation (WHO) database, is key to improving drug safety in a country where medicine consumption is high, experts say.

Gaps in the system mean the government has less data to determine whether drugs might have harmful side effects. Also, relatively little information flows from one of the world’s largest pharmaceutical markets to the WHO database of over 12 million suspected adverse drug reactions.

“In a country of 1 billion people consuming so much medicine, obviously safety is a concern,” said G. Parthasarathi, dean of the pharmacy school at JSS University in Mysore, adding the pharmacovigilance program is still gaining traction. “We’ve made a good start,” he said.

Tracking adverse drug reactions is urgent “in public health programs where huge amounts of medicine are being used,” said Sten Olsson, a WHO programme expert at the non-profit Uppsala Monitoring Centre (UMC) in Sweden which maintains VigiBase.

The centre analyses the WHO database for worrying patterns among suspected reactions and, where there are safety concerns, publishes a “signal” that goes out to member countries. It is up to those countries to act on that information or not. “We’re concerned that with some of our new signals nothing has been done with them,” said Olsson.

Indian health officials say the monitoring program is a “high priority” and a $14.5 million annual budget is sufficient.

“We are going to develop a better pharmacovigilance system in India in due course,” said G.N. Singh, India’s drug controller. “Patient health will be assured.”

To make a new drug in India, companies need permission from the national drug controller after submitting safety and efficacy data including from local clinical trials. For four years after an approved drug is on the market, firms must submit safety reports, including those on adverse drug reactions.

After that there is no mandatory requirement for them to report all adverse reactions, and smaller firms, which make up over a third of India’s market, often don’t have robust monitoring resources.

“They feel after four years, every drug is safe,” said a person working in pharmacovigilance at a multinational drugs company in India. “That’s not the case.”

Last year, only about one tenth of the suspected adverse drug reactions India collected came from drugmakers, compared to 95 percent in the United States.

But making reporting mandatory for all companies and all drugs is not realistic, industry advocates say.

“You have up to 80,000 drugs on the market. You think the government is prepared to do pharmacovigilance for all of them?” said T.R. Gopalakrishnan, deputy secretary-general of the Indian Drug Manufacturers Association. “Many manufacturers don’t even know where their drugs are being consumed.”

Some of India’s 179 monitoring centres operate smoothly, but other parts of the system aren’t working, program administrators say. In interviews with staff at more than 20 centres, program coordinators cited problems ranging from a shortage of personnel, computers and funds to raise awareness among staff to a lack of cooperation from doctors who say they are too busy.

“I call doctors to my office, serve them tea… and push them to report. What else can I do?” said C.B. Choudhary, who coordinates a monitoring centre at Katihar Medical College in Bihar state. “I want the program to start, but it isn’t happening,” he said.

Not all centres require extra personnel or equipment, and those that do are in the process of getting full staff, said V. Kalaiselvan, principal scientific officer at the Indian Pharmacopoeia Commission which hosts the pharmacovigilance program’s headquarters in Ghaziabad outside New Delhi.

Regarding doctors’ lack of engagement, “the culture of reporting is improving,” he said.

The body recommended, for instance, that the regulator require an antibiotic combination of piperacillin and tazobactam, sold in India by several major drugmakers, be sold with a warning that it could cause breathing difficulty and potassium deficiency.