Preventing coronary heart disease is not just about what you eat but is also linked to the cooking style you adopt, according to a team of international researchers who say urbanised South Asian’s susceptibility to the disease is partly due to high-heat cooking methods such as roasting or frying. 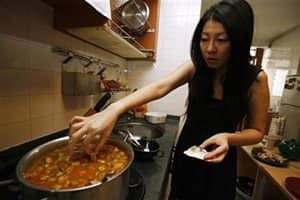 Contending their hypothesis is contributory and needs further research, the experts highlight the fact that Chinese cuisine involves mostly braising, steaming and boiling rather than frying. (Reuters)

Thinking of ditching the salad bar in favour of pakoras from your favourite snack vendor? Think again.

Preventing coronary heart disease (CHD) is not just about what you eat but is also linked to the cooking style you adopt, according to a team of international researchers who say urbanised South Asian’s susceptibility to the disease is partly due to high-heat cooking methods such as roasting or frying.

High-heat food preparation is responsible for the increased risk of CHD in urbanised South Asians (Indian, Pakistani, Bangladeshi and Sri Lankan populations in South Asia and overseas), compared to other populations that employ lower cooking temperatures, such as the Chinese, the experts say in a new study.

Contending their hypothesis is contributory and needs further research, the experts highlight the fact that Chinese cuisine involves mostly braising, steaming and boiling rather than frying.

“The vital message to take home from our hypothesis is that high cooking temperatures lead to the formation of neo-formed-contaminants (NFCs) such as trans-fatty acids (TFAs) and advanced glycation-end-products (AGEs). These significantly increase the risk of CHD,” the study’s lead author Smitha Kakde told IANS in email interaction.

Since most Indian food is spice-based, cooked in a sauce and has high NFCs, Kakde advocated using lower cooking temperatures (lower than 150 degree Celsius), in addition to switching to healthier options like olive oil.

“There is considerable research to prove that lowering cooking temperatures reduces NFC formation, leading to reduced CHD risk. Some oils do not reach high cooking temperatures, for example, olive oil, and we would recommend using these healthier options,” Kakde advised.

In terms of deploying new gadgets such as air fryers, Kakde stressed on keeping temperatures from soaring beyond 150 degree Celsius.

“Newer gadgets such as air fryers may have some positives like lower oil utilisation. However, if these gadgets use temperatures over 150 degree Celsius, NFCs are produced which inevitably increases the CHD risk,” she explained.

Published in the journal ‘Nutrition’, the study was the brainchild of Raj S. Bhopal from the University of Edinburgh and also involved Swati Bhardwaj and Anoop Misra from National Diabetes, Obesity and Cholesterol Diseases Foundation (N-DOC), New Delhi.

The authors reviewed the actions of AGEs and TFAs on health, the relationship between these products and CHD, the effects of preparing food and reheating oils at high temperatures on NFCs, and the foods and mode of preparation in South Asian and Chinese cuisines.

“Most hypotheses are evolutionary and we would have to wait tens of thousands of years for genetic change and even developmental origins of disease hypothesis would take several generations. With this hypothesis, albeit with further research, we could turn things round in a generation,” Bhopal emphasised.

While traditional Indian cooking may have always been a risk factor for CHD, exposure to fast food (prepared at high temperatures), coupled with sedentary lifestyles, exacerbates the problem among urbanised South Asians, including Indians, said Kakde.

Shedding light on the different styles of cooling, Chef Madan Rai of the popular home-style Chinese restaurant chain Buddha Bites, said in Chinese stir fry, only a dash of oil is used along with splashes of water.

“We can’t say it’s totally healthy. Dark soy sauce is harmful so we mostly use light soy. But in Chinese (cooking), we use very little oil,” Rai told IANS, also suggesting less use of spices.

According to Suvro Banerjee, a consultant interventional cardiologist, some of the foods which are healthy, could be harmful if cooked in the wrong way.

“If you take fish, it’s healthier to bake or grill it rather than fry or deep fry it. The awareness is spreading among a section of people but there is need for mass awareness on preparing food in a healthy way,” Banerjee, of Apollo Gleneagles Hospital, told IANS.

The bottom line, according to Misra, is to follow healthy cooking practices with healthy oils for South Asians, in order to prevent diabetes and coronary heart disease.

“Credible hypothesis presented in this article will stimulate research on this important issue, and may contribute to formulation of preventive strategies,” Misra, Chairman, Fortis CDOC Hospital for Diabetes and Allied Sciences, New Delhi, told IANS.

Next Story
Mumbai hosts astrobiology conference on life in space