Thackeray directed officials to test international and domestic passengers at airports, and asked them to take necessary steps without waiting for instructions from the Centre. 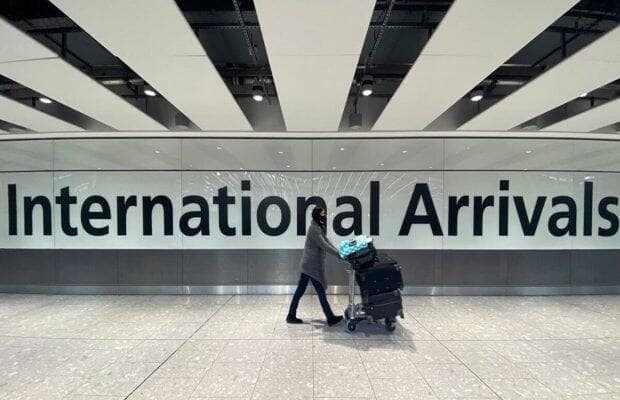 The passenger is asymptomatic and had quarantined himself at home. (File)

A resident of Dombivli in Mumbai, who returned from South Africa on November 24, tested positive for Covid-19 upon arrival. However, health officials are still to ascertain if he has been infected by the Omicron variant.

Kalyan Dombivli Municipal Corporation Chief Medical Officer Pratibha Panpatil said the 32-year-old passenger boarded a flight from Cape Town to Delhi via Dubai. He gave a sample in Delhi and boarded the connecting flight to Mumbai. He was found to be positive upon arrival.

The passenger is asymptomatic and had quarantined himself at home. The corporation later sent him to an institution to quarantine.

Health officials of the corporation have alerted the airport authorities and the man’s co-passengers are being located.

Maharashtra Additional Chief Secretary (Health) Dr Pradeep Vyas said his samples had been for genome sequencing to ascertain if he was carrying the Omicron variant.

According to the Centre’s updated guidelines issued on November 11, international passengers have to submit samples for RT-PCR tests upon landing. Passengers also have to follow home quarantine for a week and undergo a mandatory retest on the eighth day.

Amid rising worry over the Omicron variant, the Brihanmumbai Municipal Corporation has begun contacting 466 international passengers who arrived in Mumbai over the past 15 days from “countries of concern” such as South Africa. The civic body will take swab their samples for RT-PCR tests. An official said 97 of these were residents of Mumbai. The civic body is contacting all passengers for updates on their health.

Additional Commissioner Suresh Kakani said the passengers living in Mumbai didn’t show any symptoms and were quarantining at home. The civic body will conduct RT-PCR tests for them today.

The Maharashtra government is set to make a week-long quarantine mandatory for international passengers from/transiting through countries of concern, The Indian Express has learnt. For domestic passengers, the government plans to make negative RT-PCR test mandatory to enter the state.

Thackeray directed the officials to test international and domestic passengers at airports, and asked them to take necessary steps without waiting for instructions from the Centre, the Chief Minister’s Office said in a statement.

He also asked the officials to monitor on a war footing international passengers who land elsewhere and travel to Maharashtra by domestic airlines, railways or road. The government also discussed institutional quarantine for passengers flying from or transiting through southern African countries.

A government official told The Indian Express that it had been suggested to have seven-day institutional quarantine for such passengers.

On Saturday, the Brihanmumbai Municipal Corporation proposed mandatory 14-day institutional quarantine for passengers flying from South Africa. Sources told The Indian Express that the state government was likely to issue an order in one or two days.

Thackeray said the Omicron variant presented a worrisome challenge, adding that care should be taken so that the risk of infection did not increase. He said options such as lockdowns was not affordable and restrictions such as masking, avoiding unnecessary crowding, and keeping safe distance needed to be followed.

The Maharashtra chief minister also warned of strict action against violators. He also directed officials to check the availability of oxygen and medicines and conduct fire audits at hospitals, while emphasising that people should take both vaccine doses.

Thackeray asked officials to ramp up inoculation in Palghar, Chandrapur, Ahmednagar, Nashik, Jalna, Gadchiroli, Solapur, and Buldhana districts that have vaccination coverage below 30%.

The chief minister is scheduled to chair a Cabinet meeting today where the new variant and vaccination are likely to be discussed.

Additional Chief Secretary (Health) Dr Vyas said the state government would ramp up ‘Test-Track-Treat-Vaccine’. The government plans to increase daily testing to over 11 lakh from the current state-wide average of 6.5 lakh tests.

Mumbai Mayor Kishori Pednekar had earlier announced that passengers arriving at the airport from South Africa would be sent to quarantine and genome sequencing done if they tested positive.

The civic body has now extended the protocols to run genome sequencing tests on all Covid-19 positive passengers irrespective of the country they arrive from.

Additional Commissioner Kakani said they were not getting enough samples for genome sequencing due to few active cases. As a result, the civic body has decided to conduct the test for all international passengers who test positive.

Hospitals have also kept beds on standby for Covid-19 patients in case of a surge. Only 1,100 of the 17,380 beds in dedicated Covid-19 health facilities are occupied at present.

He said 513 pressure-swing adsorption (PSA) plants had been installed in districts. Over 50% of the installation work has already been completed.