Coronavirus Lockdown Extension in India, Daily Count of Covid-19 Cases in India, Coronavirus Vaccine Shortage India Highlights: From Delhi to Bengaluru, cities are shutting down the vaccine centres due to a shortage of stocks. 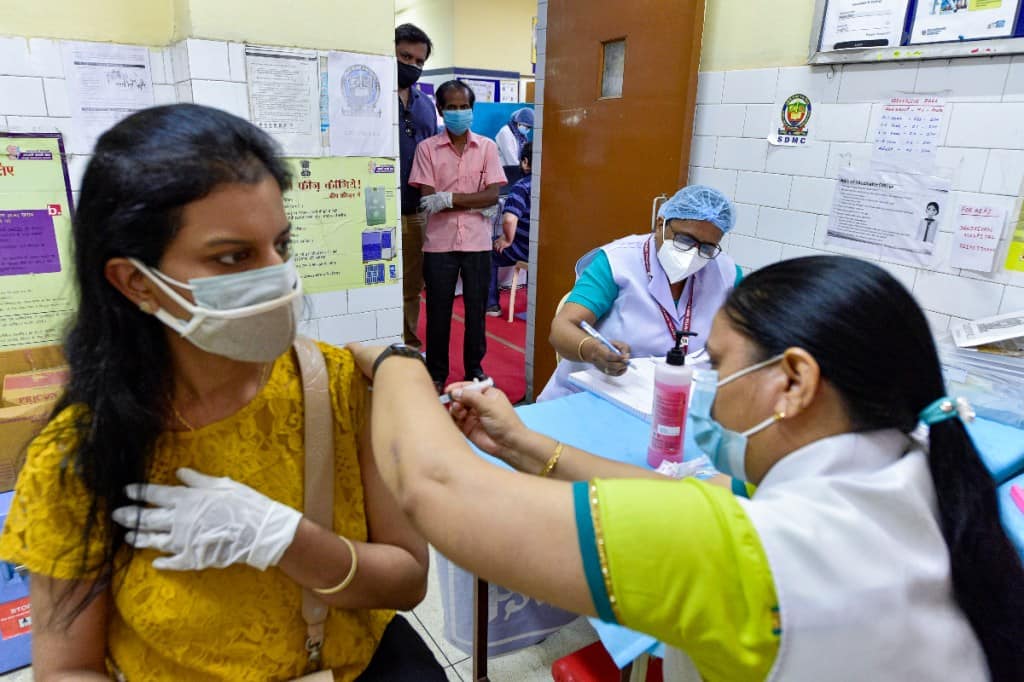 A medic administers COVID-19 vaccine to a beneficiary amid the second wave of coronavirus epidemic, in New Delhi, on May 13, 2021. (PTI Photo)

Coronavirus Daily Cases and Deaths in India, Covid Vaccine India Highlights: Vaccination is the only way out of the coronavirus pandemic and India is struggling to say the least. Sample this – Only 3 per cent population is fully vaccinated in the nation of 133 crore! In addition, there is this confusing policy by the Narendra Modi government. Delhi Chief Minister Arvind Kejriwal has said that it is because of the Centre’s complicated policy that states are fighting with each other for the vaccine. As of now, as many as 10 states have decided to or have already floated global tenders for corona vaccines.

From Delhi to Bengaluru, cities are shutting down the vaccine centres due to a shortage of stocks. But it should be noted that these are those people who were successfully able to register and get a Cowin slot for the Covid-19 vaccine. The situation remains abysmal in the villages. After Ghazipur, Balia, Chhapara and Buxur, now reports are coming in about floating bodies being spotted in Ganga near Patna. There are reports that locals have cast fishing nets to prevent the bodies from being disposed of in the holy Ganga.

As the world’s second-most populous nation tries to find a way out of the second Covid wave, here are the latest, confirmed updates from India and around the globe:

Also Read
Covid-19 Vaccine Certificate: Here’s how to download it from CoWin portal, Aarogya Setu app
Serum, Novavax to work on flu, malaria and booster Covid vaccines
COVID 19 test report: How to read Ct value and why is it important?
Eight hospitals to set up committees to decide on applications for aid to treat rare diseases

Coronavirus Live Tracker: Maharashtra reports less than 40,000 new Covid-19 cases after one and half months

Maharashtra on Friday reported 39,923 new COVID-19 cases and 695 deaths, the state health department said. The number of new infections dipped below 40,000 for the first time since March 31 when 39,544 cases had been recorded. On Thursday, the daily case count was 42,582. | Read More

West Bengal on Friday registered its highest single-day spike of 20,846 fresh COVID-19 cases, taking the tally to 10,94,802, the health department said in its bulletin. The toll rose to 12,993 after 136 more people succumbed to the disease, it said. At least 19,131 recoveries were recorded in the state since Thursday. Accordingly, the number of active cases climbed to 1,31,792. | Read More

Coronavirus Live Tracker: Kerala Govt issues additional guidelines to be effective between May 17 & May 21

Kerala Govt issues additional guidelines to be effective between May 17 & May 21; says ‘special intensified stringent restrictions shall be enforced in Thiruvananthapuram, Ernakulam, Thrissur & Malappuram where infections show upward trend’ (ANI)

Tamil Nadu Govt intensifies norms in the current complete lockdown. As per new announcement, grocery shops, vegetable shops, fish & meat shops will be allowed only b/w 6-10 am. Tea shops will not be allowed. No permission for roadside shops selling vegetables, flowers & fruits. E-commerce companies can function b/w 2-6 pm. E-Pass registration essential for those who come from other States & foreign countries. E- Pass registration compulsory for intra-State & inter-State travel w.e.f. from May 17th, 6 am. Complete lockdown on both Sundays (16th and 23rd) (ANI)

Mumbai reported less than 2,000 new coronavirus cases for the fourth time this month on Friday with 1,657 infections coming to light. The city also recorded 62 deaths during the day, the BMC said. The caseload in the country’s financial capital rose to 6,85,705 and death toll reached 14,138, said an official of the Brihanmumbai Municipal Corporation (BMC). | Read More

The Kerala government on Friday announced that the total lockdown being enforced in the state from May 8 to May 16 will be extended till May 23 to contain the massive spread of COVID-19. The decision to extend the lockdown was taken in view of high test positivity rates in districts, Chief Minister Pinarayi Vijayan said. | Read More

Coronavirus Live Tracker: There will be no vaccination on May 15 and May 16, says Municipal Corporation of Greater Mumbai

There will be no vaccination on May 15 and May 16: Municipal Corporation of Greater Mumbai (ANI)

Coronavirus Live Tracker: MP govt to provide a monthly pension of Rs 5000 to children who have lost the sole breadwinner of their family

I say this with full responsibility that no child should think of himself as an orphan. They are our children. Such children, who have lost the sole breadwinner of their family, will be provided a monthly pension of Rs 5000 until they become self-sufficient: MP CM (ANI)

Delhi reported 8,506 new coronavirus cases, the lowest in over a month, with a positivity rate of 12.40 per cent, while 289 more people succumbed to the infection, the Health Department said on Friday. However, Chief Minister Arvind Kejriwal said ICU beds in hospitals in the city were still full. The less number of fresh cases can also be attributed to a smaller number of tests — 68575 — conducted on Thursday. At 12.40 per cent, the positivity rate is the lowest since April 11 when it stood at 9.4 per cent. The number of new infections is the lowest since April 10 when 7,897 people were diagnosed with the disease, according to government data. In a virtual press conference, Kejriwal said the number of new infections reduced to around 8,500 from a high of around 28,000 cases and that the positivity rate dipped to around 12 per cent from a high of 36 per cent on April 22. ‘In the past 10 days, 3,000 beds have become empty, however, ICU beds are still full,’ he added.  | Read More

The World Health Organization on Friday said local conditions needed to be taken into account if a country is planning to allow vaccinated people not to wear masks in public. “In the instance of a country that wishes to take away a mask mandate … that should only be done in the context of considering both the intensity of transmission in the area and the level of vaccine coverage,” WHO’s top emergency expert, Mike Ryan, told a virtual briefing in Geneva. | Read More

The Kerala government on Friday announced that the total lockdown being enforced in the state from May 8 to May 16 will be extended till May 23 to contain the massive spread of COVID-19. The decision to extend the lockdown was taken in view of high test positivity rates in districts, Chief Minister Pinarayi Vijayan said. The state is currently under a 9-day complete shutdown as part of its efforts to bring down the daily caseload of infected persons. (PTI)

The armed forces have roped in Battlefield Nursing Assistants (BFNA) to help fight the second wave of COVID-19 and have suggested that a similar model can be followed by state governments and hospitals, according to senior officials. Lt General Madhuri Kanitkar, the Deputy Chief of Integrated Defence Staff (Medical), believes BFNAs can also train young volunteers to help relieve trained nurses of administration duties so that they can be gainfully utilised for more important duties in the fight against the pandemic. The armed forces are pulling out all available resources to augment its ‘Ops CO-JEET’, a joint effort of the Army, the Indian Air Force and the Navy against the pandemic, and have deployed BFNAs at COVID-19 care centres. (PTI)

Coronavirus Live Tracker: Kerala HC seeks timeframe from Centre within which State is likely to get Covid vaccines

The Kerala High Court on Friday sought a timeframe from the Centre within which the southern state is likely to get the COVID-19 vaccines. In an oral observation, the court said if vaccination is delayed, new mutations will come up and it will claim more lives. The division bench of the high court, comprising Justices Raja Vijayaraghavan V and MR Anitha, made this observation while considering a plea challenging the decision to charge for vaccinations of those between 18-45 years age group and the differential pricing structure followed between the centre and the state. The petitioners said if the technology is transferred, other manufacturers can produce the vaccine. Counsel for the centre assured the court that it can file a statement but sought time till May 21. (PTI)

AAP MLA Atishi said on Friday that over 1.23 lakh people were vaccinated the previous day in Delhi and nearly 43.67 lakh doses had been administered so far. As many as 10 lakh people have taken both the doses, Atishi said while issuing the vaccination bulletin. “The Delhi healthcare system is proceeding with vaccination at a good pace. The vaccination in 18-44 age group has declined owing to 144 centres being shut due to unavailability of Covaxin,” she said. Delhi has three days of Covaxin and two days of Covishield stock left for the 45-plus age group, frontline and healthcare workers. Eight days of Covishield vaccine stock is left for the 18-44 age group, she said. (PTI)

Superstar Salman Khan on Friday received the second dose of the novel coronavirus vaccine. The 55-year-old actor, who got the first jab of the vaccine in March, was spotted at a centre in Dadar in Mumbai. Recently in an interview, Salman Khan had shared that his parents, veteran screenwriter Salim Khan and producer Salma Khan, got their second dose on May 9, while brother-producer Arbaaz Khan received his first shot on Sunday. The actor went for the vaccination a day after his much-awaited film ‘Radhe: Your Most Wanted Bhai’ started streaming on multiple platforms, including OTT and DTH services. (PTI)

A day after Jharkhand saw the number of fresh COVID-19 fatalities drop below 100 for the second time in May, it again rose to 108 on Friday, taking the death toll 4,290, the Health Department said in a bulletin. The tally of coronavirus patients also climbed to 3,06,248 with 4,991 new cases. The state now has 48,468 active cases, while the total number of recovered cases currently stands at 2,53,490, the bulletin said. Ranchi district again recorded the maximum number of new fatalities at 40.  On Thursday, it had reported 19 and 36 the day before. East Singhbhum recorded 16 fatalities, followed by 10 each in Hazaribag and Bokaro. (PTI)

Odisha on Friday registered its highest single-day spike of 12,390 new COVID-19 cases, which pushed the tally to 5,88,687, while a record number of 22 fatalities raised the toll to 2,273, a senior health department official said. Accordingly, the number of active cases climbed to 1,04,016, the official said. Of the 12,390 new cases, 6,938 were reported from various quarantine centres, and the rest detected during contact tracing, he stated. Khurda district, of which state capital Bhubaneswar is a part, accounted for 2,201 new cases, followed by Sundergarh at 882, Cuttack at 719, Sambalpur at 677 and Angul at 532. (PTI)

Soft launched Sputnik V in Hyderabad today to start testing of cold chain logistics with 2-dose regime. Next consignments are expected in coming weeks. It will be available for customers in India by mid-June after stock ramp-up: Dr Reddy’s Labs (ANI)

West Bengal Chief Minister Mamata Banerjee today wrote to PM Narendra Modi inquiring about the disbursal of Pressure Swing Adsorption (PSA) Plants to Bengal from the Centre. “You are kindly aware that PSA plants are meant to enable the hospitals to make oxygen out of the air in the environment, and PSA plant is a great apparatus for a hospital needling to serve patients in dire need of oxygen,” she said in the letter. READ MORE