A biosensor to peer into insides of HIV-infected cell 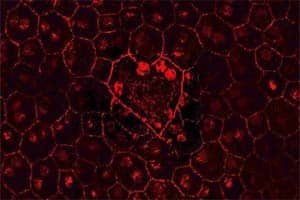 A new biosensor can measure what is going on within HIV-infected cells in real-time and also provide insight on the interactions between the AIDS virus and the tuberculosis causing bacteria within the cells.

Researchers from IISc, Bangalore, the International Centre for Genetic Engineering and Biotechnology (ICGEB), New Delhi and Jamia Millia Islamia, New Delhi have exploited this non-invasive biosensor that can measure what is going on within HIV-1 infected cells in real-time.

This technology can offer insights which can help in controlling the AIDS infection besides insight on the interactions between HIV-1 and TB-causing bacteria, Mycobacterium tuberculosis (Mtb), says a release by Gubbi Labs.

Since its discovery, Acquired Immune Deficiency Syndrome or AIDS has caused an estimated 36 million deaths worldwide (as of 2012). Its causative agent, the Human Immunodeficiency Virus (HIV), has thus been a hot topic of research.

Human body produces oxygen free radicals called Reactive Oxygen Species or ROS, during routine cellular metabolism. When not regulated properly, accumulation of these ROS can lead to oxidative stress. Heightened oxidative stress is one of the primary causes of reactivation of HIV-1 in infected cells.

Oxidative stress also decreases proliferation of disease fighting immune cells; besides, it causes loss of memory in immune cells. These factors reduce the efficiency of the immune response toward the HIV.

A major cellular antioxidant called glutathione (GSH) functions as a protective shield against the oxidative stress. GSH levels in infected cells and tissues are indicators of the level of infection.

The team has devised a non-invasive biosensor methodology for precise measurements of GSH levels within HIV-1 infected cells. Earlier methods use whole cell or tissue extracts, which destroy detailed information related to the GSH levels in different areas within an infected cell.

Study discovered that a modest increase in oxidative stress is sufficient to reactivate virus from latency. This may allow researchers to adopt a “shock-and-kill” strategy in which virus could be reactivated by oxidative stress inducing compounds and subsequently killed/flushed by current anti-HIV drugs.

The fluctuation of GSH levels detected by the biosensor also helps understand the expression of antioxidant genes and related pathways during latent and active stages of infection. The sensitivity and specificity of this biosensor could be further used in understanding the physiological changes in HIV-1 infected cells and the mechanism of drug action.

“Since TB is the major cause of HIV related deaths, our findings have major mechanistic and therapeutic potential for both TB and AIDS (among the main causes of human death),” said one of the researchers.