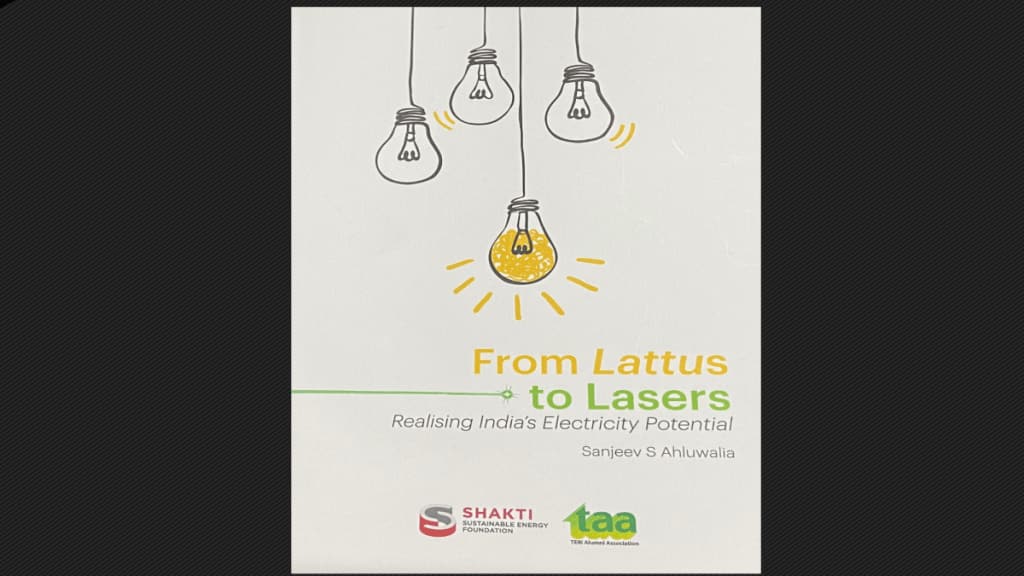 It is illuminating and a timely take on a complex topic. In just 70 pages, energy expert Sanjeev S Ahluwalia has packaged the complete history of Indian electricity with points to ponder on the way ahead. In his book or rather a booklet, titled “From Lattus to Lasers- Realising India’s Electricity Potential,”  Ahluwalia dishes out a comprehensive and concise narrative on the evolution of the electicity sector in India over one and a half centuries. That all the legal and policy frameworks that have shaped this sector could be pieced together in a short and succinct manner speaks of Ahluwalia’s deep understanding and rich experience gathered over the years. A founder secretary of the Central Electricity Regulatory Commission, Ahluwalia is currently the advisor at the Observer Research Foundation and is an honorary member of the governing council of the CUTS Institute for Regulation and Competition. He begins by first throwing light on the book title explaining Lattus, a colloquial term used in north India for arc lamps shaped like a spinning top (lattu), a cheap and popular toy. India, he says, first experienced  Lattus in Surat in 1883 and sparked a journey to universal electricity access, which 139 years later saw the night sky above the Rashtrapati Bhawan in New Delhi lit up by laser beams to mark the retreat ceremony during the Republic Day celebrations in 2022.

The path adopted to enlarge access to electricity during 1950-1984, explains Ahluwalia, was through planned development with primary reliance on the public sector. Subsequently, between 1985 and 2020, saw the roping in of the private sector. Incidentally, he mentions that in 1901, Hyderabad became the first city to be electrified and many who have tracked this sector would know that around 1996, a Hyderabad-based company GVK became the first to commission an Independent power plant at Jegurupadu in Andhra Pradesh. What happened thereafter and why GVK and several others private sector players – both Indian and global – could not take off is a subject of separate discussion. “Most foreign investors,” says Ahluwalia, “found the regulatory ecosystem unconducive for profitable business in the power generation sector.” According to him, “three main near-unsurmountable barriers stood in the way of such investment.” First, he says, “no SEB (state electricity board) had a stand-alone, viable revenue profile. Second, fuel had to be arranged by the investor and third, the SEBs remained monopoly buyers of bulk power.”

Ahluwalia says, “the agenda of making power distribution and retail supply productive and profitable remains incomplete.”
An added challenge is that of coping with populism. Ahluwalia points out that “a multi-state political economy study in India found that nurturing a culture of demand for good-quality access to electricity, combined with deft managerial improvements in the functioning of discoms, could develop a counter narrative to dilute the lazy political fallback practice of competitive politics around the price of electricity.” He then goes on to suggest some legislative tweaks to contain populism. These include: multi-state regulatory commissions; rotational membership of SERC (State Electricity Regulatory Commission) members in the central commission; apart from empowering SERCs to enforce fiscal discipline on subsidies.

The book concludes suggesting short-term hard choices that need to be made and refers to the trends that are today favouring India. These also include the aspect that high growth could make green power affordable. Already, leading corporate giants – Reliance and Adani – are talking of mega capacities to produce green hydrogen and at globally lowest rates of one dollar for a kilogram. Apart from huge investments in solar energy generation. Talk to many experts and the question that often comes up is around how to reach it in the most cost-efficient manner to the remote parts of the country and not be held back due to the huge transmission and distribution losses. Can the experiments in decentralisation work here? How to ensure these along with building on the momentum of investments into making efficient power-consuming devices and products? Perhaps answers to these and more could be aspects Ahluwalia could consider for his subsequent books.