A large number of devotees today thronged temples across Punjab and Haryana, including Chandigarh… 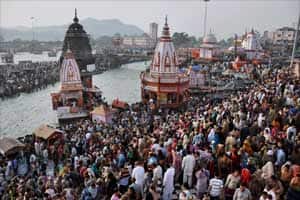 A large number of devotees today thronged temples across Punjab and Haryana, including Chandigarh, on the occasion of Maha Shivratri.

Since early morning, the devotees thronged Shiva temples to offer prayers and were seen taking a holy bath in rivers, sacred ‘sarovars’ and performing special ‘pujas’.

The famous Saketri temple here was bedecked for the celebrations.

The festival was also celebrated with traditional fervour and gaiety in both the states as lakhs of devotees gathered at the temples.

The devotees made a beeline at the ancient Shiva temple in Hoshiarpur. At other places in Punjab, including Amritsar, Jalandhar, Ludhiana and Patiala, there was a huge rush.

In a message, Badal said that Shiva is the lord of mercy and compassion.

“Lord Shiva protects devotees from evil forces such as lust, greed, anger and grants boons, bestows grace and awakens wisdom in his devotees,” he said.

Badal asked people to celebrate the festival with traditional fervour and gaiety as such festivals not only promote communal harmony, compassion and goodwill but also bring joy and prosperity.

In his message, Khattar said, “Maha Shivratri inspires people to strive towards the pursuit of truth, which leads to the ultimate consciousness epitomised by lord Shiva.”

He asked people to celebrate this auspicious occasion collectively by rising above the petty considerations of caste, colour, creed and religion.

Next Story
Swine flu toll rises to 150 in Gujarat