Entering complicated territory, TM Krishna examines the role of caste in Carnatic music through the prism of a veda vadyam 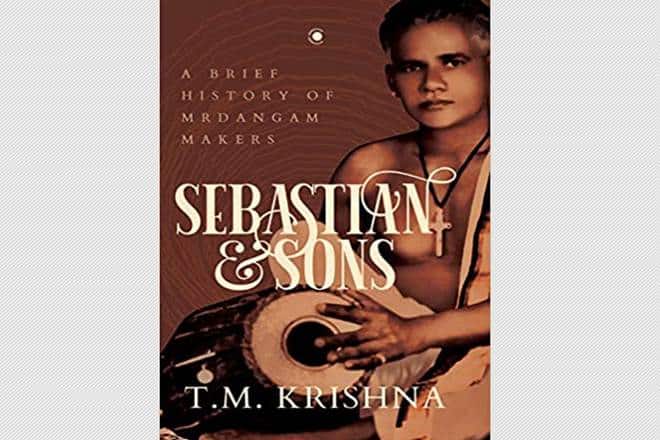 In his latest book, Sebastian and Sons: A Brief History of Mrdangam Makers, Krishna ventures into another complicated territory and examines the role of caste in Carnatic music through the prism of a veda vadyam (Vedic instrument) that is integral to a performance.

Exploring various aspects of Carnatic music, the musician and writer TM Krishna, in one of his earlier books, A Southern Music: The Karnatik Story, deconstructed the art of legendary vocalist MS Subbulakshmi through the prism of gender politics. In Subbulakshmi, he wrote, “we find a devadasi who through her music became the epitome of a brahmin housewife — pious, divine, with all the qualities of a woman of high culture.”

In an incisive assertion that complicated her life as well as the artistic scene she was a part of, Krishna acknowledged that the “bhakti music of MS was beautiful, uplifting, unforgettable”, “but the actual positioning of MS and her social transformation was the work of men in society, especially those constructing the modern Karnatic story.”

These words reflected a musician who, deeply conscious of the social and cultural moorings of his art, wanted to unravel the fine threads that go into the making of a maestro. Krishna was, of course, not against the devadasis. He rather wanted the end of “the almost voyeuristic practice of romanticising the devadasis” so that their artistic legacy is “excavated from the debris of their history”.

In his latest book, Sebastian and Sons: A Brief History of Mrdangam Makers, Krishna ventures into another complicated territory and examines the role of caste in Carnatic music through the prism of a veda vadyam (Vedic instrument) that is integral to a performance.

Krishna travelled extensively through south India, interviewed as many as 43 mrdangam makers and 10 players and used both archives and oral history for this well-researched book. The book traces the origins of the modern mrdangam in Thanjavur before Chennai became a major centre of the instrument.

He narrates the tales of several families involved in mrdangam-making. An eminent one was of a Dalit-Christian Sebastian and his three sons — Shengol, Parlandu and Antony.

The book rests on an unsettling irony. While the mrdangam-makers have mostly been Dalits, the musicians are upper-caste Brahmins. The craftsmen remain at the lowest rung of the music pyramid, considered mere masons, and their contribution to the art remains neglected.

The book raises a question that begins with music but covers the entire arts. A question that a mrdangam-maker Arulraj articulates: “Why do they (Brahmin musicians) not give us the respect and importance that we deserve?”

In other words, the world of arts is intrinsically unequal as it reserves recognition to the performer but pushes the craftsman into oblivion. An inequality that springs from caste division.

An anecdote aptly reveals the ironical bond between the craftsman and the musician. The great mrdangam player Palghat Mani Iyer, who belonged to a traditional Brahmin family, once confronted a dilemma upon realising that the cow hide is an integral part of the instrument. Wondering whether the killing of the holy cow amounted to a sin, he first decided to approach the Shankaracharya of Kanchi Mutt, and later raised the question before C Rajagopalachari. Rajaji skirted it away by quoting a proverb: “Don’t look for the sources of a river or the antecedents of a saint.”

Effectively then, the Dalits do all the dirty tasks and help the Brahmins maintain their ‘purity’. A man uses cow hide to make an instrument that is placed in another’s temple. And yet, the artisan cannot enter the artist’s home, much less the temple.

The book also disappoints at instances. It has a large number of characters, and too many voices are thrown in than the text can possibly handle. Some of these characters and details could be trimmed. The book needed a tough editor.

The lack of editing apart, the work impresses because its musician-writer is both passionate and concerned about his art and its social structure, an artist who realises the position of the Brahmin privilege he speaks from. This book, then, can be seen as a quiet atonement for all the historical wrongs the upper-caste practitioners and connoisseurs of the veda vadyam have committed against the person who gave birth to the instrument.

Follow us on
Latest News
Meta offers immigration support to H-1B visa holders impacted by its lay-offs
It’s time to turn Indian cotton into a brand: Commerce and Industry Minister Piyush Goyal
Tata Motors optimistic about domestic CV sales crossing the peak by 2025
Best influencer marketing agency in India
India vs England T20 World Cup Semifinals Match 2: When and where to watch IND vs ENG Live
Ex Malabar 2022: Focus on enhancing interoperability in Indo-Pacific region
US midterms: Democrat Krishnamoorthi calls on candidates to ‘denounce violence and bigotry’
Photos
Lunar Eclipse 2022: Did you get a glimpse of Chandra Grahan? This is how the Moon appeared in different parts of the world
21 hours agoNovember 8, 2022
Happy Guru Nanak Jayanti! A festive look into the celebrations from across the nation
1 day agoNovember 8, 2022
Dazzling & Astounding! Proposed design of the to-be redeveloped Dakaniya Talav Railway Station in Rajasthan-PHOTOS
4 days agoNovember 5, 2022
Read More
×
Eye-disease drug may help fight Covid
Walk in the garden! PM Modi to inaugurate Bengaluru Airport’s new terminal that looks like a garden
ICAR-CCARI launches Coastal Agricultural Information System
NASA moon mission eclipsed again, rocket launch delayed owing to storm menace
Eating healthy to working out: Here’s how you can keep your heart healthy
7 Clever and creative ideas for the most graceful corner décor in your home