The book takes one through the history of India’s border with both Tibet and China primarily driven by the British Empires strategic consideration of keeping Russia away. 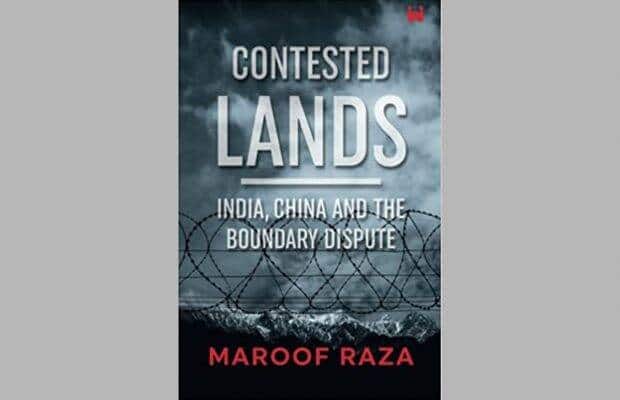 Maroof pivots it on two key questions; who does Aksai Chin belong to?

Maroof Raza is a person who wears many hats; a soldier, scholar and one of India’s foremost strategic affairs experts. He has now come out with; ‘Contested Lands ‘ a book that provides details of India’s borders with China written almost two years after ; Kashmir Untold Story which he co authored along with Iqbal Chand Malhotra. As is a hallmark of his books, his depth of research and ability to put across the facts in a logical manner connecting all the dots and looking at issues from a different perspective stand out in what will surely be amongst the most valued books on this subject and a necessary addition of literature by those who wish to understand the historical background and complexities of the border issue. The book dives deep into history, going right to the root by examining how perceptions have been shaped. This is indeed a remarkable book providing a rare insight into an extremely contentious issue with an impressive clarity of thought .

The book takes one through the history of India’s border with both Tibet and China primarily driven by the British Empires strategic consideration of keeping Russia away. It clearly brings out the three sets of lines drawn by the British in the North namely the Johnson Line in 1865, the Johnson- Ardagh Line in 1897 and the McCartney MacDonald Line in 1899. The border negotiations with Tibet took place in 1914, with the Chinese in attendance. The only positive fallout of which was the Chinese recognition of the McMohan Line in the North East. The deliberations have been wonderfully covered to include the number of documents presented by the Tibetans and the quiet dignity of Paljor Dorji vis a vis the Chinese representative constantly attempting to stall the talks and the role of a Chinese spy. Maroof clearly states that the claims of Ladakh are based on the Treaty of Chushul in 1842 which in turn is based on the Treaty of Tingmosgang of 1684 signed between Ladakh and Tibet when both were feudal states.

The Chinese began their occupation of Aksai Chin in the 1950’s and soon started constructing the vital highway running through it linking Lhasa with Kasghar, better known as the G219. It was known to the Indian government but remained outside the public domain and dismissed as CIA propaganda. Further there is no clarity as to why Nehru chose to ignore confirmed evidence presented by the Army following the recce by Captain (later Major General) Rajendra Nath in 1952. He was tasked to carry out this recce by General Cariappa but the report was never declassified. Neither was adequate heed taken after the Longju incident in 1959 soon after the Dalai Lama was given asylum in India. Was Nehru completely obsessed with being nonaligned and projecting such an image? China’s support seemed to be more important than India’s Northern borders which has also been alluded to by Iqbal Chand Malhotra in his brilliant introduction where he states that Nehru handed over the region of Gilgit-Baltistan to Pakistan as he did not want India to be viewed as anally by permitting the British nuclear monitoring station there.

Maroof writes about an historical opportunity in October 1949 when India could have seized the moment to side with the US in an anti-Communist alliance. This was just before Nehru’s visit to the US when Radio Peking declared that the immediate task of the PLA was to liberate all Chinese territories including Tibet, Xinjiang, Hainan and Taiwan. Maybe this would have prevented the annexation of Tibet by China but as Maroof points out in the book no country other than Mongolia recognized Tibet between 1911 to 1951 and even the UN resolution on Tibet was moved by El Salvador and India did not support the Tibetan initiative and UK abstained.

Clearly, India’s leadership was divided in their assessment of China’s occupation of Tibet and intentions. Sardar Patel saw it as a clear sign of Chinese expansionism and even cautioned Nehru about his complacent approach in November 1950.The question remains as to whether Nehru should have been more realistic and less driven by idealism. The 13th Dalai Lama’s prophecy in 1933;” our political system will be reduced to an empty name” unfortunately rings true today.

An interesting piece in the book is the manner in which Major Bob Khathing, MC, MBE a Naga from Manipur had on the orders of the then Governor of Assam Jairamdas Daulatram established Indian administrative control over the border town of Tawang, and the manner in which he won over the Monpas and unfurled the tricolour there in February 1951. This act was not appreciated by Prime Minister Nehru at that time but can definitely be counted amongst one of the most remarkable feats achieved without a bullet being fired. It was probably Sardar Patel who had decided upon the operation sometime in December 1950; and had ordered Jairamdas Daulatram to go ahead with Bob Khathing, not willing to repeat the experience of Kashmir.

The conflict of 1962 is covered in great detail by the author in which he highlights some strategic errors, which included not taking heed to the advice of the Army post Exercise ‘LalQuila’ conducted by General Thorat, the Defence Minister dismissing the evidence of the Chinese build up photographed by none other than Wing Commander Jaggi Nath, MVC and not using the Air Force for fear of escalation on the influence of some people including Professor PMS Blackett a British Defence Advisor over ruling the willingness of Air Vice Marshal Jaswant Singh, the AOC-in-C Eastern Air Command to send fighters to defend NEFA. While much of the blame points to the triumvirate of Nehru, Krishna Menon and BN Mullick, the question of responsibility for India’s debacle in the East remains unanswered as to whether it was General Kaul or the politico- military leadership.

There are answers to many questions regarding India’s reverses that lie within the pages of the Henderson Brooks Report but sadly that remains declassified. The book covers this at length including Ram Madhav‘s views and the vested interests behind the need to maintain its secrecy. As per the author the immediate cause of the collapse in NEFA rests on the Generals to include Pran Thapar, Bogey Sen, Bijji Kaul and Brigadier Monty Palit. The book also highlights that it was only General Umrao Singh who stood up to the indiscriminate establishment of posts as part of the forward policy and he was sidestepped from his responsibilities.

The book also takes a look at the incidents at Nathu La in 1967 and Jelep La in 1964 and the contrasting approaches by 17 and 27 Mountain Divisions. While 27 Mountain Division vacated its positions on the watershed Major General Sagat Singh stood firm at both Nathu La and Cho La and there were numerous acts of unprecedented valour by the troops on ground which changed the Sino- India dynamics dramatically. The next time India responded was in 1986 at Sumdrong Chu in Arunachal Pradesh when the then Chief General Sunderji mobilised forces to the McMohan Line as part of Operation Falcon and Operation Chequered board. Maroof goes into the details of how he stood his ground while briefing the Prime Minister in the Military Operations Room in South Block.

The Border Peace and Tranquility Agreement was signed in 1993 during the visit of Prime Minister Narshima Rao to China but the transgressions have not ceased by the Chinese. The development of infrastructure and enhancement of both capabilities and capacities have been unabated.

India had demonstrated its resolve at Doklam, a tri junction between India, China and Bhutan when the Chinese attempted to change the status quo. For the first time it was a dispute about a third country’s territory. India demonstrated that it was unwilling to be brow beaten and would stand up for its friends. The Incident at Galwan has also been covered in detail where again the response was swift and well-coordinated by the Army, Navy and Air Force. Unfortunately, Galwan destroyed the myth that we could have peace and tranquility on our Northern borders with the Chinese.

The book once again reinforces the point how the Chinese take advantage of any major global crisis to pursue their agenda as they feel the spotlight is no longer on them. The first negotiations on the border issue in 1914 failed to be enforced by the British as they got embroiled in World War I. Subsequently, when Russia was on the back foot in 1942 during World War II, the KMT began the reintegration of Sinkiang. Again during the Korean Crisis in the early 1950’s the Chinese annexed Tibet, closer home 1962 War took place when the world was confronted with the most defining challenge; the Cuban missile crisis and more recently the barbaric clash at Galwan was at the peak of the pandemic confronting the world.

It is evident that the Chinese have grabbed large areas in the Aksai Chin region, and they’ve refused to give it back. This had even led to the 1962 Himalayan conflict. And despite the series of illusory ‘Peace and Tranquility’ agreements between Indian and Chinese leaders from 1998 onwards, which have led to 22 rounds of high-level dialogues, the Chinese have yet to accept our maps and claim lines of the LAC along Ladakh and McMohan Line In the North East.

Unfortunately, they are focusing on trying to make incremental tactical gains and constantly taking actions in violation of the numerous bilateral agreements and mechanisms but now the collusivity with Pakistan has deepened considerably.

While the issue examined may seem to be complex, Maroof pivots it on two key questions; who does Aksai Chin belong to? And Will China accept the McMahon Line, which separates it from India’s north-eastern regions, as the international border between the two countries? The answers to both have a profound impact not only on Indo- China relations but also on the geo strategic relations in the world. There is no doubt in any one’s mind that the undefined boundary is the core issue that needs to be resolved and the book provides an insight on how we need to shape our narrative to safeguard our strategic interests .Unfortunately, the perspectives of the LAC differ to a great extent which have been reinforced with the passage of time and hardened into beliefs therefore for any progress to take place regarding the resolving of differences, both India and China need to first come to an understanding regarding the recognition of the LAC.

History of developments over the years and the prevailing thoughts as documented by Maroof deserves serious and wide attention as the trials of the present do not diminish the significance of the past. On the contrary, this now seems more relevant.