Back to the dark room: Early photography sees light of the day 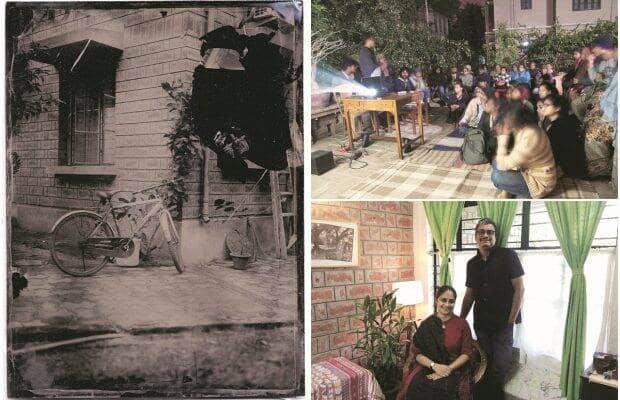 Founded in 2015 by the artist-couple Arpan Mukherjee and Shreya Mukherjee, Studio Goppo is today a favourite destination for photography enthusiasts eager to pick up the steps early practitioners followed nearly two centuries ago.

In the middle of a sultry September five years ago in Santiniketan, West Bengal, Krishanu Chatterjee was a lone student in a curiously named studio learning photography methods going back to the 19th century. A Bengaluru-based artist, Chatterjee remembers coming across Studio Goppo while searching for early photography practices on the Internet. “I wrote to the studio immediately seeking help to enroll as a student,” recalls Chatterjee. “There was no workshop for students available at that time, but I insisted on a one-to-one workshop and was accepted. I went to Santiniketan, attended the workshop and returned to Bengaluru with a promise that I would make a darkroom at home and practise early photography,” he adds.

Founded in 2015 by the artist-couple Arpan Mukherjee and Shreya Mukherjee, Studio Goppo is today a favourite destination for photography enthusiasts eager to pick up the steps early practitioners followed nearly two centuries ago. Goppo, a Bengali word that means ‘small stories’, symbolises its founders’ philosophy of gathering people around ideas in the world of photography. In a world defined by digital technology today, Arpan and Shreya’s passion for traditional photography offers plenty of inspiration for people who are willing to do a lot of hard work for a sense of fulfilment and aesthetics.

Alternative photography
“We were concerned about the language of photography rather than the visuals,” says Arpan, who teaches print making at the Visva-Bharati University, Santiniketan. “That is why we were looking at the old methods of photography. We forget that there is immense knowledge created by the scientists and alchemist-cum-photographers of the 19th century out there,” adds Shreya, a member of the guest faculty of Burdwan University’s College of Art and Design. “We are not biased against digital or analogue. We don’t want to be limited to any single thing,” she adds.

Studio Goppo, a two-storeyed iron and glass building next to the couple’s own home in Santiniketan, is working towards creating an archive of traditional knowledge and a library where researchers, artists, photography enthusiasts can work. Many days, the couple set out looking for old photography studios, engaging senior practitioners in conversations, recording their knowledge and even collecting equipment like negatives and photographs. “That is the knowledge (of vastly experienced senior practitioners) that die first,” says Arpan.

At Studio Goppo, where workshops in early photography practices are held every year, participants find out how handmade analogue methods of making photographs leave their impact on images. In early times, photography was linked with chemistry and art. “It was a time when photography was like painting,” says Shreya, whose doctoral research was in the history of photography in India, adding: “You are creating a photograph with handmade surfaces. It was not a factory-made object.”

Since its launch six years ago, Studio Goppo has had over 100 students from across India and from Bangladesh, Denmark, United Kingdom, Sweden and Romania. “Alternative photography studios in terms of contemporary practices are rare worldwide,” says Arpan. “There are artists working in alternative photography studios in New Zealand, Australia, China and Japan. In the rest of the world, it is always empty,” adds Arpan, who is looking towards a future in which several such studios co-exist and exchange knowledge and students. “Students who come here to learn are not limited to artists and photographers. There are filmmakers, doctors, schoolteachers and corporate executives too,” he says, adding: “You are making a photograph from scratch. That gives a different kind of joy.”

Documenting knowledge
In India, documented knowledge of early photography practices can be traced to the 1840s. “We found that there were photographers in India who were practicing in 1839 shortly after the invention of photography,” says Shreya about the knowledge brought to the country from Europe during the colonial era. “It was an easy transfer of knowledge from England to India. The arrival of the digital age in India in the ’90s slowly wiped away the space of analogue photography,” she adds.

At the studio, students learn early photography processes, including negative making and printmaking. Once a negative is developed using a traditional method, the photograph can be printed on any medium like albumen or salt print. Delhi-based artist Sukanya Ghosh, who attended a five-day workshop on wet plate collodion method at Studio Goppo in November 2019, remembers the complexity of the process. “It is a complicated process,” says Ghosh, who finds the imperfection of the early method as part of the beauty of the photograph. “My work is entirely about imperfections, mistakes and blurs,” she says, adding: “You have to learn how to use the chemicals. I like these processes that are more painterly, how you treat the plate, treat the chemicals.”

Chatterjee, who spent 10 days in a single-student tutorial at Studio Goppo in 2016, learned the ambrotype method, how to make wet plates positive and negative, and even salt prints. “I felt oversaturated with the commercial photography world and wanted to understand the history of photography. That is how I came to the world of alternative photography,” he says. After returning from Santiniketan, he built a small darkroom as promised at his home and first tried the cyanotype method and started working towards wet plate and salt print processes. “The main thing is to slow down. The whole process is meditative. It is the need of the hour,” says Chatterjee.

Next Story
Cleanest water bodies of the world