Allergic to milk proteins? Time to opt for potato milk! 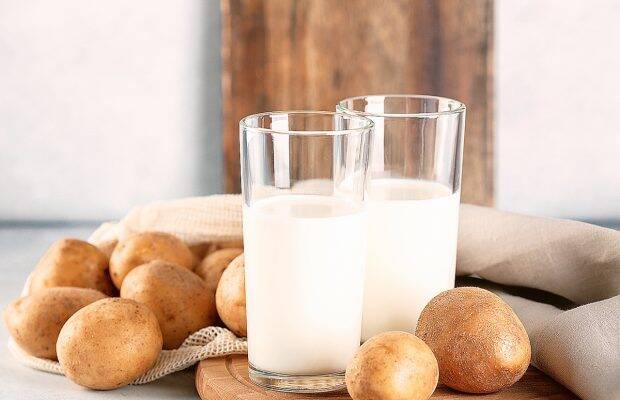 A report this month by British retail giant Waitrose states potato milk is set to become one of the biggest food trends in 2022. A Swedish brand Dug has already entered the space of plant-based milk made from potato to trap consumers allergic to milk proteins. Currently, potato milk is available in Sweden, China and the UK.

Definitely a sustainable choice, potatoes are easy to grow and nutritious if consumed well and also considered as comfort food. Nutritionists too find it calorie-friendly, and healthy. Besides egg yolk, rice and banana, potatoes and sweet potatoes form an important part of a balanced diet, suggests author and nutritionist Kavita Devgan in her book The Don’t Diet Plan. In her list of 10 favourite weight loss foods, she says potatoes are high in carbs but thrice as filling as a slice of white bread, and rich in resistant starch, which help burn fat.

“Potatoes are healthy unless loaded with fats like butter, sour cream, melted cheese and bacon bits. Much of the bad reputation they get is actually due to the companions that they are served with or the way they are cooked, which make it high in calories. Potatoes are a good source of fibre. But make sure you have it with the skin intact, as without the jacket the fibre content is reduced,” she says.

While sustainable eating and eco-conscious diets gained momentum in 2020, non-dairy milk like oats has already conquered the world as a popular alternative. This year, Nestle introduced a plant-based milk brand to compete with Danone’s Alpro and Oatly in the growing market for dairy substitutes. Nestle rolled out a pea-based milk alternative called Wunda, available in France, the Netherlands and Portugal besides other European countries with other dairy-free products like yogurt.

India is the world’s largest consumer of animal-derived milk in the world. But the plant-based milk industry is still in its infancy. And the reason why it is rapidly gaining popularity is because it addresses three pressing challenges—climate chan-ge, personal health and animal welfare. “Both dairy and non-dairy industries are expected to grow and co-exist as they are addressing different needs of a consumer. However, studies show that switching to plant-based products is the most impactful way to reduce carbon footprint. These products are fortified with essential nutrients, low in calories and help in improvement of gut health. As the majority of our population is lactose intolerant, non-dairy alternatives are increasingly becoming a necessity for many as they are prescribed by their doctors, dietitians and health professionals,” says Kunal Mutha, founder of Singapore-based Only Earth, a plant-based beverage that launched coconut, oats and almond milk in India this year. Cow milk uses the most land and water and results in the most greenhouse gas emissions.

According to a 2020 report by Good Food Institute India and & Ipsos, India continues to be the largest producer and consumer of animal-derived dairy. But plant-based dairy is gaining acceptance and estimated at $21 million vs the animal derived dairy industry at $140 billion. Plant-based dairy in India is projected to grow at a CAGR of 20.7% to reach $63.9 million by 2024.