The hajj is a once-in-a-lifetime duty for all Muslims physically and financially able to make the journey, which takes the faithful along a path traversed by the Prophet Muhammad some 1,400 years ago. 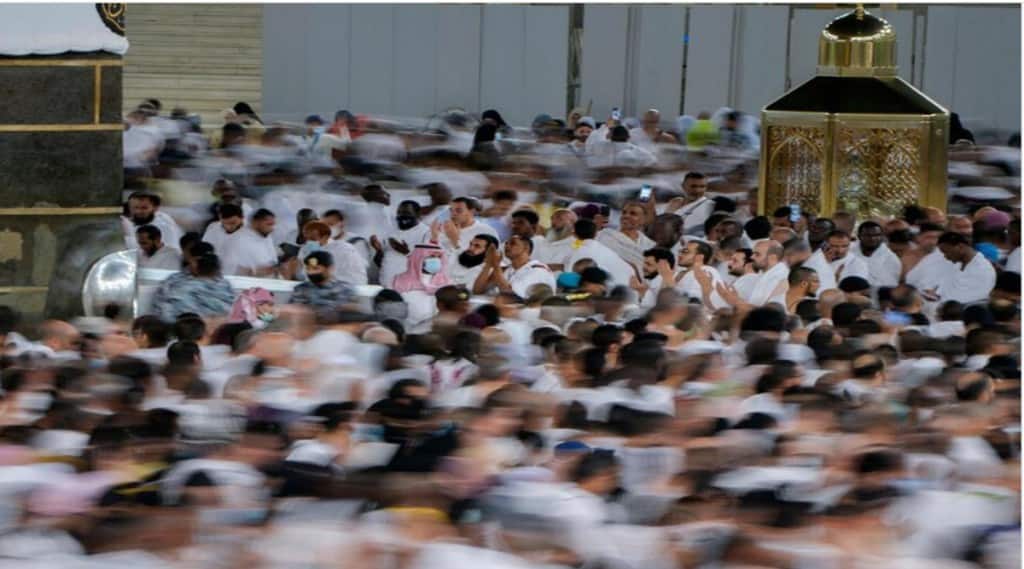 In this photo taken with low shutter speed, Muslim pilgrims pray as others circumambulate around the Kaaba, the cubic building at the Grand Mosque, in Mecca, Saudi Arabia, Wednesday, July 6, 2022. (Photo source: AP)

It is a scene that stirs hope — and relief — for Muslims around the world. One million pilgrims from across the globe amassed on Thursday in the holy city of Mecca in Saudi Arabia to perform the initial rites of the hajj, marking the largest Islamic pilgrimage since the coronavirus pandemic upended the annual event — a key pillar of Islam.

The hajj is a once-in-a-lifetime duty for all Muslims physically and financially able to make the journey, which takes the faithful along a path traversed by the Prophet Muhammad some 1,400 years ago. Pilgrims spend five days carrying out a set of rituals intended to bring them closer to God.That includes praying around the cube-shaped Kaaba, the holiest shrine in Islam. At the center of the Grand Mosque’s courtyard on Thursday, thousands of unmasked pilgrims circled the Kaaba.

The crowds, visibly thinner than usual, moved counter-clockwise around the granite building in a blur, their hearts tilting toward the structure meant to symbolise the oneness of God in Islam. Wherever they are in the world, observant Muslims face the Kaaba to pray daily.Pilgrims appeared to throw COVID-19 caution to the wind as they thronged the Grand Mosque — in sharp contrast to the social distancing and mask requirements of the past two years. This time, there were signs of lingering vigilance.

Typically, worshippers would fight the crowds for a chance to touch and kiss the black stone on the Kaaba’s eastern corner, but the government has banned this practice. Saudi authorities also distributed bottles of water from the holy Zamzam well instead of allowing pilgrims to drink from cups at the mosque. Thousands of medical workers were on hand to assist those in need.

This year, the hajj is open to just 1 million foreign and domestic pilgrims who have been fully vaccinated against the coronavirus, tested negative for COVID-19 and are between 18 and 65 years old. Authorities estimate 85% have arrived from abroad.While this year’s attendance is far below the pre-pandemic influx of 2.5 million pilgrims, it represents a significant step closer to normal after the kingdom restricted the event to a small number of Muslim residents for the past two years.

The ritual was almost scrapped in its entirety in 2020, when as few as 1,000 residents were permitted to take part. Some 60,000 residents attended last year. The unprecedented restrictions sent shockwaves through the Muslim world and devastated many believers, who often save up and wait for years to make the pilgrimage. Although no longer in the shadow of the pandemic, this hajj is taking place amid Russia’s war on Ukraine — a conflict that may be thousands of miles from the homes of many Muslims but has sent the prices of staple foods soaring and spread misery across the world.

This year’s hajj also showcases de facto ruler Crown Prince Mohammed bin Salman’s latest efforts to loosen social restrictions and transform the kingdom. Saudi Arabia officially began allowing women to perform the hajj without a male guardian, or “mahram,” last year.The hajj in Islam is meant to be a great equaliser and unifier among Muslims. Pilgrims wear simple clothing: For men, it’s typical to wear a white draping garment, while women wear conservative dress and headscarves, forgoing makeup, nail polish and perfume to draw closer to God.But even Mecca cannot escape the world’s wealth gaps: The well-heeled may pay some USD 3,000 a night for five-star hotels overlooking the Kaaba. For most people, however, the pilgrimage means sleeping in simple accommodations or on the ground around the mosque to perform daily prayers ahead of the hajj.

With many more people applying to perform the hajj each year than the kingdom can accommodate, the Saudi government controls the flow of visitors through annual quotas based on each nation’s Muslim population.The visa regulations have grown stricter after deadly incidents in recent years. In 2015, several thousand pilgrims were crushed to death in a stampede. This year, tight quotas were sharply reduced. Indonesia sent just over 100,000 people, the world’s largest contingent.
Shiite powerhouse Iran, Saudi Arabia’s regional foe that in 2016 barred its citizens from making the pilgrimage amid an escalating sectarian rivalry, sent over 39,000, down from 88,550 in 2019.

Iranian Supreme Leader Ayatollah Ali Khamenei’s special envoy for the hajj did not receive a visa because he is over 65, Iranian media reported.Iran has criticised the kingdom for its decision to restrict pilgrims because of the virus. As tensions eased between the rivals amid regional negotiations and a ceasefire in Yemen, hajj officials from the countries met last month to discuss security for the first time in years.Although the pandemic is far from over, with hundreds new infections a day in the kingdom, the government is glad of the influx. The event is a critical source of prestige and tourism for Saudi Arabia.