WhatsApp now allows you to use messenger without the internet; how to use

A new feature on WhatsApp’s latest update allows users to send messages even when there is no network or internet connection in the smartphone. 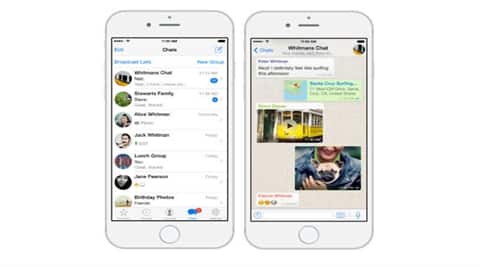 Apart from the 'offline' feature, WhatsApp's update also allows you to share 30 pictures or videos (from 10 earlier) at the same time.

A new feature on WhatsApp’s latest update allows users to send messages even when there is no network or internet connection in the smartphone. In a similar feature that is present in Facebook Messenger, emails and messages, WhatsApp in its latest iOS update enables users to queue up messages even if they are offline. The update also includes a redesign which allows you to manage the storage in your phone in a better way. Additionally, WhatsApp now allows you to share 30 pictures or videos (from 10 earlier) at the same time. This new feature can be availed by Apple iPhone users by installing the latest WhatsApp 2.17.1 update. The new ‘offline’ feature is already available for Android users.

WhatsApp is inarguably the most popular messaging app, with more than a billion users who use it to stay connected with family and friends. When these people are in trains or places which have limited or no internet connectivity, there is a problem in sending texts via WhatsApp, so there was a need to go back to the App and send the texts which also required to check for connectivity every now and then. Now, you can send the text and the app will automatically send it to you when if finds a connection. This comes as great news, especially for a country like India which suffers from low speed or no internet connectivity in many areas. India is the biggest market for WhatsApp with more than 160 million monthly active users.

In the new storage redesign, the storage usage screen on iPhones comes as a great new feature to clear up space the devices. You need to go to, Settings and select Data and Storage Usage and then go to Storage Usage at the bottom. You will be able to check which messages and groups have been taking up the highest amounts of space on your smartphone. You can then select them and delete to clear free space on our device. The size of the new WhatsApp app is 91.2 MB and can be downloaded from App Store.

Also read | WhatsApp puts user data at risk; here’s why you should be worried

Meanwhile, recently a The Guardian report said that University of California, Berkeley found a backdoor in WhatsApp that leaves user’s private texts and calls open to interceptions, that could be used by Facebook and the likes. However, WhatsApp had denied all such claims.