Owners of Apple Watch have found that their inked skin confuses the sensors on the underside of the device. 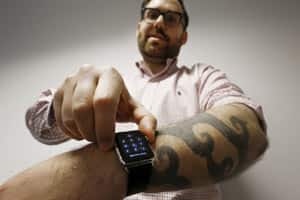 Owners of Apple Watch have found that their inked skin confuses the sensors on the underside of the device. (Reuters)

Early adopters of the Apple Watch, Apple Inc’s first new product in five years, are complaining that a number of its key functions are disrupted by their tattoos.

Owners of Apple Watch – including this reporter, who bought a 42mm version with stainless steel case and black classic buckle for A$1,029 ($822) – have found that their inked skin confuses the sensors on the underside of the device.

Users of the watch, which went on sale last week, took to social media on Thursday under the hashtag #tattoogate to air their frustration with the flaw from Apple’s renowned design house.

One anonymous user on Reddit, an entertainment, social networking, and user-generated news website, said the device’s locking mechanism, which should disengage when the watch detects it is being worn, failed to work on decorated skin.

“My hand isn’t tattooed and the Watch stayed unlocked. Once I put it back on the area that is tattooed with black ink, the watch would automatically lock again,” the user wrote.

This Reuters reporter, who has a black tattoo on his left arm, also found that the watch locks on tattooed skin and does not deliver the soft pings that alert a user to incoming messages. The heart rate readings were also significantly different on the tattooed and untattooed wrists.

An Apple support article says the watch uses green LED lights paired with light-sensitive photodiodes to detect the amount of blood flowing through the wrist and calculate the frequency of heart beats.

A website support page from the company says tattoos can interfere with readings from the heart rate monitor, but does not mention interference with other functions.

“Permanent or temporary changes to your skin, such as some tattoos, can also impact heart rate sensor performance. The ink, pattern, and saturation of some tattoos can block light from the sensor, making it difficult to get reliable readings,” it said.

A spokesman for Apple in Sydney declined to comment on Thursday, but three Apple employees at its flagship Sydney store, including a senior advisor from its tech support line, said they were unaware of any issue.

“To be honest, you’re my first caller about the Apple Watch at all,” the senior advisor told Reuters.

The tattoo issue follows a report in the Wall Street Journal on Wednesday that some taptic engines, which produce the sensation of being tapped on the wrist, started to break down over time, a flaw that was slowing the rollout of the item.

The report said the problem had been detected in some of the parts supplied by AAC Technologies Holdings Inc, based in Shenzhen, China. Shares in AAC Technologies dropped 8 percent on Thursday morning after the report. The company did not respond to requests for comment.

A Taipei-based technology analyst, who is in regular contact with AAC, said he was not aware of the tattoo problem, but did not expect it would have a significant impact on production.

“We have been hearing suppliers encountering some bottleneck issues for Apple Watch’s production such as problems with its displays, haptics or assembly,” he told Reuters, adding that those issues were quite common for new products.