Jio Phone to come with PM Narendra Modi app; what other apps will you get on 4G mobile for free

Reliance Jio Phone will also come with many mobile apps, including an inbuilt NaMo app. Find out here. 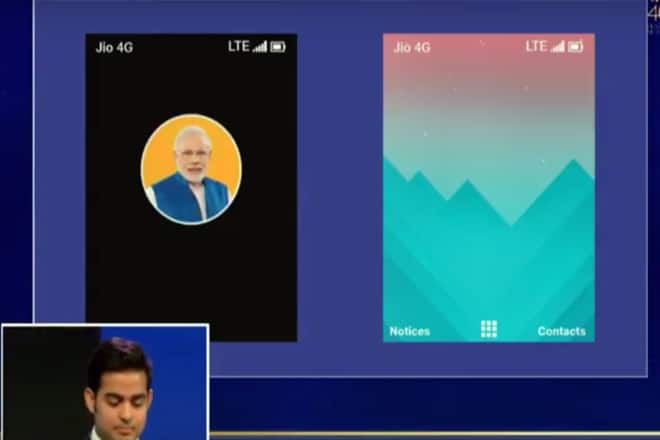 Reliance Jio Phone was launched last Friday and it looks like a device which stands somewhere between a smartphone and a feature phone. With a price of just Rs 1,500 to be paid initially, and which can be refunded after a period of three years, it is one of the most cost effective ways for people to get access to 4G internet. This phone is being backed up by special plans which sound really good right now. Meanwhile, the 4G VoLTE enabled feature phone will also come with many mobile apps, including an inbuilt NaMo app. While the JioPhone includes a number of apps, on stage, Mukesh Ambani’s son Akash demonstrated PM Narendra Modi’s ‘Mann Ki Baat’ in the NaMo app. In the JioPhone launch video, we also spotted the Facebook app. Interestingly, many reports have suggested that the JioPhone may not support the hugely popular WhatsApp.

Meanwhile, it is possible that Jio decides to add support for WhatsApp later on, as it is one of the most used mobile applications in the country. WhatsApp currently has over 200 million active users in India, according to the Facebook’s February 2017 data. Interestingly, users will have access to JioChat which is the company’s own chatting platform. It is possible that Reliance may want to test the feature, whether it becomes popular by reaching a wider audience through the app. Till the phone is launched by Jio, we have to wait and watch. Meanwhile, the JioPhone will have other usual apps which come with the Jio service, and they are- MyJio, JioTV, JioCinema, JioMusic, JioMags, JioXpressNews, JioCloud, Jio4GVoice, JioMoney, JioSecurity, JioNewspaper, and JioNet. Also, some of the reports floating around on the internet have suggested that the Jio Phone may have an OS, which can lead to a few more applications on the 4G mobile.

Although the JioPhone data plans announced on stage mentioned ‘unlimited’ data access, here is actually a daily usage limit – a fair usage policy. Users can access only up to 500MB (half a gigabyte) of high-speed Internet data daily when paying for the Rs. 153 plan. As we get closer to August 24, when people can pre-book a JioPhone, we expect more of these details will become clear. The phone will feature a 2.4-inch QVGA display, FM radio, torch, headphone jack, SD card slot and an alphanumeric keyboard. It will support digital payment via NFC, 4G VoLTE calls and data.