There has been great buzz in the last few months over Clean India or Swachh Bharat Abhiyan. 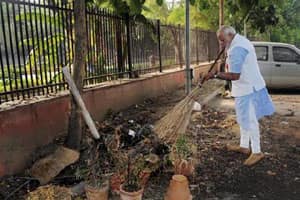 There has been great buzz in the last few months over Clean India or Swachh Bharat Abhiyan. As vital it is to public health to keep India’s streets and homes clean, it is equally important to have a digitally clean India to keep its technological and government functioning smooth. India’s digital health is crucial to its ambitious Make in India and Digital India plans, that hopes to empower the nation to rise to global prominence. Helping India’s digital health is IT security firm Kaspersky Lab. The anti-virus company recently announced its Clean India Digitally programme that is focused on keeping India’s digital well-being in check.

India ranks a frightening second in the world for mobile device threats and also ranks high in the local threat chart, which means that it is as vulnerable to offline attacks as it is to online ones. Kaspersky Lab, a trusted anti-virus brand in the IT industry, detected and repelled a total of 235,415,870 malicious attacks from online resources located all over the world. This makes it an able anti-virus firm that is capable of equipping India with a solid ammunition to fight malicious digital attacks that can cripple its progress.

In lieu of this initiative, Kaspersky announced Kaspersky Security Scan, a free tool that allows its user to scan his/her PC for viruses and malware at the click of a button. This campaign is being digitally promoted through Google AdWords, banners and social media since January 1, 2016. All that the viewer has to do on seeing the ad is to click on it and he will be redirected to the landing page. From thereon, the viewer has to follow the simple onscreen instructions to get the powerful anti-virus installed on his machine.

As an attractive add on, Kaspersky Lab is also offering a 60-days free trial for their Kaspersky Internet Security multi-device software. This is an exclusive trial in honour of the campaign. Altaf Halde, managing director, South Asia, Kaspersky Lab said, “We at Kaspersky Lab feel it our top priority to help users keep their digital environment as clean as possible. It is essential, primarily because the cyber criminals in the digital domain operates in much the same way as it does in the physical world: it starts as a speck of dust and eventually spreads at exponential rates.”

Kaspersky Lab will be firing on all cylinders to get as many users’ PCs clean and ready to take on any network.

In short, let them help you by simply hitting the download button when you see it.