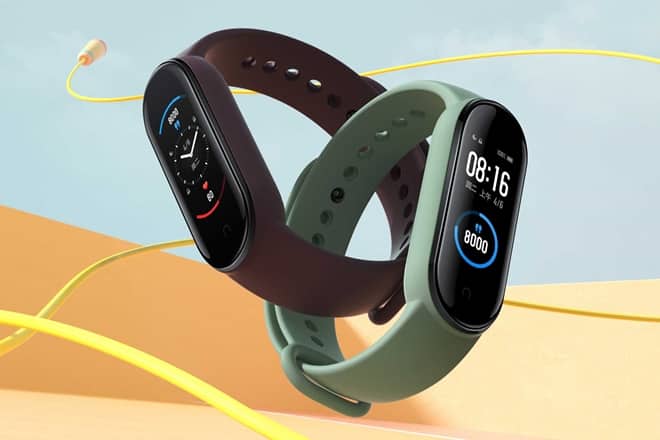 Xiaomi’s Mi Band needs no introduction. The Mi Band has become the industry standard when it comes to value for money fitness bands, and the latest iteration, Mi Band 5 adds to it in significant ways. Not that the Mi Band 4 was lacking but the Mi Band 4 just takes things to an all new level with its bigger screen, enhanced tracking, and magnetic charging. All this, and the Mi Band continues to be surprisingly affordable. Price starts at CNY 189 (roughly Rs 2,000) for the standard edition, while the NFC edition will cost CNY 229 (roughly Rs 2,500).

The main highlight of the Mi Band 5 is its colour OLED display that’s grown to 1.1 inch (Mi Band 4 had a 0.95-inch display) in size. You can customize the display with plenty of watch faces, including animated ones that are making a debut with the Mi Band 5. Top of that screen is also protected by 2.5D scratch-resistant glass up-top.

The Mi Band 5 has a six-axis accelerometer and it can also monitor your heart rate and sleep quality index in addition to recognizing your swimming strokes — the Mi Band 5 is 5ATM-certified which makes it swim-proof. The Mi Band 5 supports 11 professional modes. A Personal Activity Intelligence score will also give you insights into your workouts.

There’s a microphone built inside the Mi Band 5 to access voice commands and you can also use it to control IoT devices. The NFC option meanwhile also lets you make digital payments.

The Mi Band 5 standard edition boasts of up to 20-day battery life while the NFC variant is claimed to offer 14-day battery life on single charge. Speaking of which, the Mi Band 5 bundles in a new way of charging through a magnetic dock so you won’t need to take off the band to charge the device any more.

The Mi Band has historically almost always made its way to India, though Xiaomi hasn’t launched any NFC variants here. The Mi Band 5 is also likely to arrive in India soon enough.