Feast your eyes! This is what the Sony PlayStation 5 console looks like

This is the PlayStation 5! And here are all the big details. 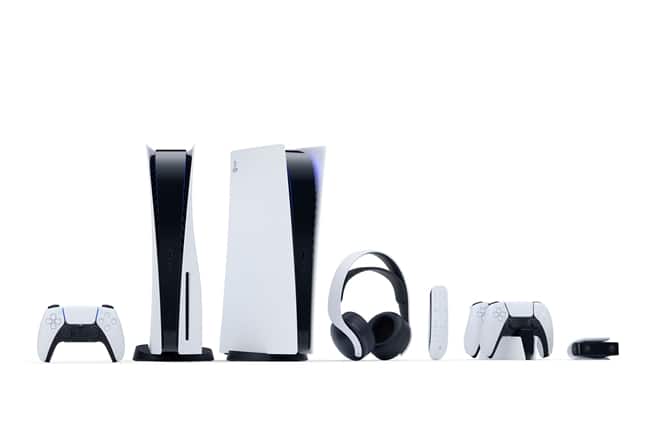 The PlayStation 5 was revealed during Sony’s “The future of gaming” virtual live stream event.

The PlayStation 5 was revealed during Sony’s “The future of gaming” virtual live stream event late last night. Like the DualSense wireless controller, the PlayStation 5 also has a dual-tone design with a white and black colour scheme. The exterior is white (and a bit curvy) while the middle portion is black. Sony has confirmed that the PlayStation 5 will be available in both disk and digital avatars which means you will be able to buy one with or without a 4K Blu-ray drive. This entails two things. The PlayStation 5 Digital Edition will be slimmer and possibly also cheaper (than the disk option).

Sony also revealed what appears to be the full line-up of first-party accessories for the PlayStation 5 during the same keynote. The list includes a DualSense charging station, an HD camera, a Pulse 3D wireless headset, and a media remote.

Sony’s PlayStation 5 design reveal comes months after Microsoft first showed off its competing Xbox Series X console. Sony in comparison has literally been drip feeding information about the PlayStation 5, though like Microsoft, it has also already revealed the full hardware specifications of the PS5. The company had announced and shown off the PlayStation 5 DualSense wireless controller in early April, giving some idea what the actual console could look like.

The DualSense wireless controller will focus on heightening the feeling of immersion by bringing a ‘sense of touch’ in games. It will come with haptic feedback and adaptive triggers, in addition to a create button, integrated microphone, and USB Type-C.

As for hardware, the PlayStation 5 will be powered by a custom 8-core AMD Zen 2 CPU paired with AMD RDNA 2 GPU (with 36 compute units capable of delivering 10.28TF of peak performance) and 825GB on-board SSD. The PlayStation 5 will also support expandable storage with regular NVMe PC drives, though you might want to get the latest PCIe 4.0-based drives for better performance.

Sony had recently confirmed that the PlayStation 5 will have exclusive games and as expected the company showed some of them (some with gameplay) during the live stream event. The list includes games like Marvel’s Spider-Man Miles Morales, Ratchet & Clank Rift Apart, Project Athia, Stray, Returnal, Sackboy A Big Adventure, Destruction Allstars, Kena Bridge of Spirits, Goodbye Volcano High, Oddworld Soulstorm, Ghostwire Tokyo, Jett The Far Shore, Godfall, and a new Horizon game called Horizon Forbidden West to name a few.

Sony also seems to have told developers that all PS4 games submitted for certification post July 13 must be forward compatible with the PS5. This should come handy for those who buy these games now for the PS4 and decide to make a switch to the PS5 in the days to come.

Speaking of which, Sony is on track to launch the PlayStation 5 this holiday season. Pricing is unknown at this point of time.