It’s got the X-factor but it’s also got all the basics right. 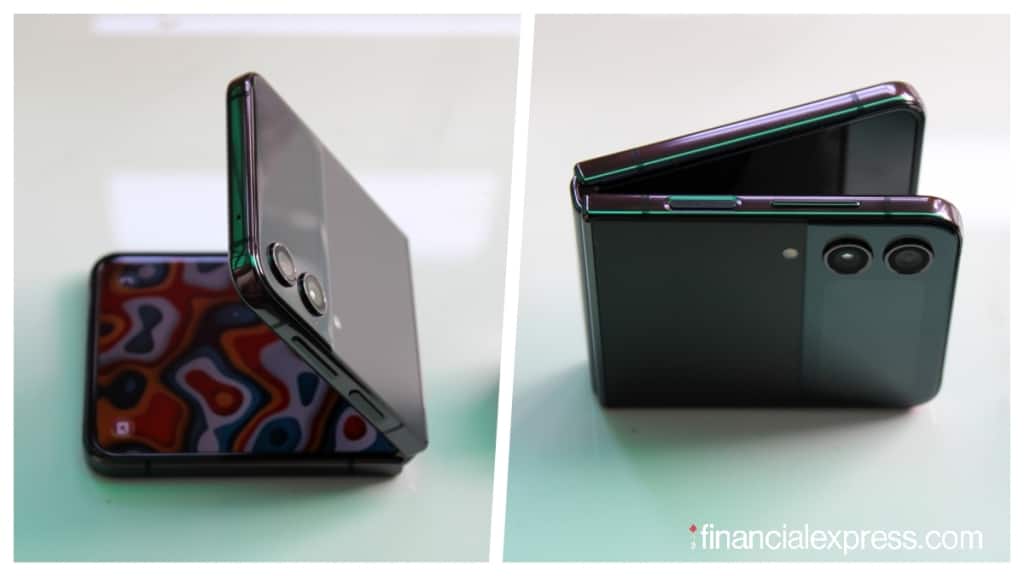 The Galaxy Z Flip 4 is not perfect. It is barely an upgrade over the Flip 3. But it is the most complete version of a phone that Samsung set out to make in 2018.

Samsung’s big focus with both its foldables – Fold 4 and Flip 4— this year has been on ironing out any potential loopholes that might stop them from being used as a regular device, even though they’re far from being regular.

The approach, as we found out recently, has worked wonders for the Fold 4. That phone slash tablet is absolutely brilliant. It is nice to see the smaller – but as ambitious— Flip 4 also getting the same attention to detail.

The result of all this is, it is no longer just a flipping novelty item but an out-and-out premium flagship you could rely on as a daily driver.

The Flip 4 looks exactly like the Flip 3 (review). The physical dimensions, too, are very nearly the same. But there are some subtle differences.

The outer frame – which is made of armour aluminium – is shinier and sharper, much like it is in the Galaxy S22 phones. It was relatively more concealed in the last generation. The flattened-out sides make the Flip 4 feel a little more compact and more ergonomic in the hands. They make the phone visibly more striking to look at, too.

You get upgraded Corning Gorilla Glass Victus Plus on the back which is soft to the touch and IPX8 water-resistance (up to 1.5m for up to 30 minutes) like before.

The screens are largely unchanged from last year possibly because there wasn’t much to fix there, anyway. The main display – which is the one that folds— is 6.7-inch with 1080p resolution and adaptive refresh rate of up to 120Hz. It is slick and contrast-rich without going overboard or anything. HDR playback is supported in streaming services like Netflix. The hinge gap and crease in the middle remain as is.

The cover screen is same as last year and is meant for recreational purposes only such as checking the time and weather or selfie previews. A key change, this year, is that the cover display can also be used to shoot selfie portraits.

The core hardware is naturally getting a refresh. The Flip 4, like the Fold 4, is using the Qualcomm Snapdragon 8 Plus Gen 1 processor. This is paired with 8GB of RAM and up to 256GB of non-expandable storage. Even more importantly, you get a bigger battery – 3700mAh versus 3,300mAh in the Flip 3— so it lasts longer. That should be a full day for most users. The Flip 4 also charges faster both wired (25W versus 15W) and wirelessly (15W versus 10W) though you still don’t get any charger in the box.

The Flip 4’s main camera can, as a result, pull more detail and wider dynamic range in photos. Low-light photography is also getting a big shot in the arm in this generation, due to the hardware change. The ultrawide and selfie cameras also perform a bit better in this generation on the back of the upgraded Qualcomm ISP. All in all, the Flip 4 is a competent flagship camera phone through and through with more hits than missies and that’s appreciated.

The Flip 4 runs the latest OneUI 4.1.1 software which is based on Android 12 (this should not be confused with Android 12L inside the Fold 4). It is impressive how Samsung is able to juggle this aspect on two radically different form factors with such ease and finesse giving them a distinct identity. The Fold 4, obviously, gets more features but the Flip 4 gets more for less.

Flex mode panels let you prop the phone at an angle of 90-degrees and gives you additional controls in the bottom half while your main app runs at the top. This works well with some apps like camera and calendar by default but you can also use it with virtually any other app that you can think of through settings. Likewise, you can force multi window for all apps so they open in pop-up view or split screen. For some curious reason, Samsung still doesn’t allow Dex on the Flip.

SAMSUNG GALAXY Z FLIP 4: WHAT COULD BE BETTER?

Samsung has made such rapid strides with the Flip 4 across the board, you really have to nit-pick to find its grey areas. There are two so to say.

One is that the Flip 4 has a tendency to run hot and throttle when pushed. It’s not very surprising, though. It’s a challenge putting so much power inside such a sleek chassis and then make it fold too. There is no lag in day-to-day use but you may find some occasional stutter during edge cases like running a benchmark or playing a graphically demanding game like Genshin.

The speaker setup, too, could be a little bit better considering Samsung’s excellent track record in this field. There is still no headphone jack, either.

SAMSUNG GALAXY Z FLIP 4 | SHOULD YOU BUY IT?

The biggest draw for the Flip 4 is the meticulous attention to detail. Samsung has basically left no area untouched even though the phone might give you the impression that nothing has changed.

The Flip 4 is what the Flip 3 (review) should have been, some would say, but for what it’s worth it’s nice to see Samsung learning from its own experiences –and feedback— to shape a product that’s getting better gen on gen giving more regular flagships something to think about.

A year or two ago, a phone like this would have had limited takers. Cut to 2022, more people should be checking this awesome piece of technology out. It is an out-of-box idea but it’s a lot more grounded than any of the previous models, meaning, it’s got the X-factor but it’s also got all the basics right.