Pocketable and pocket-friendly, sort of. 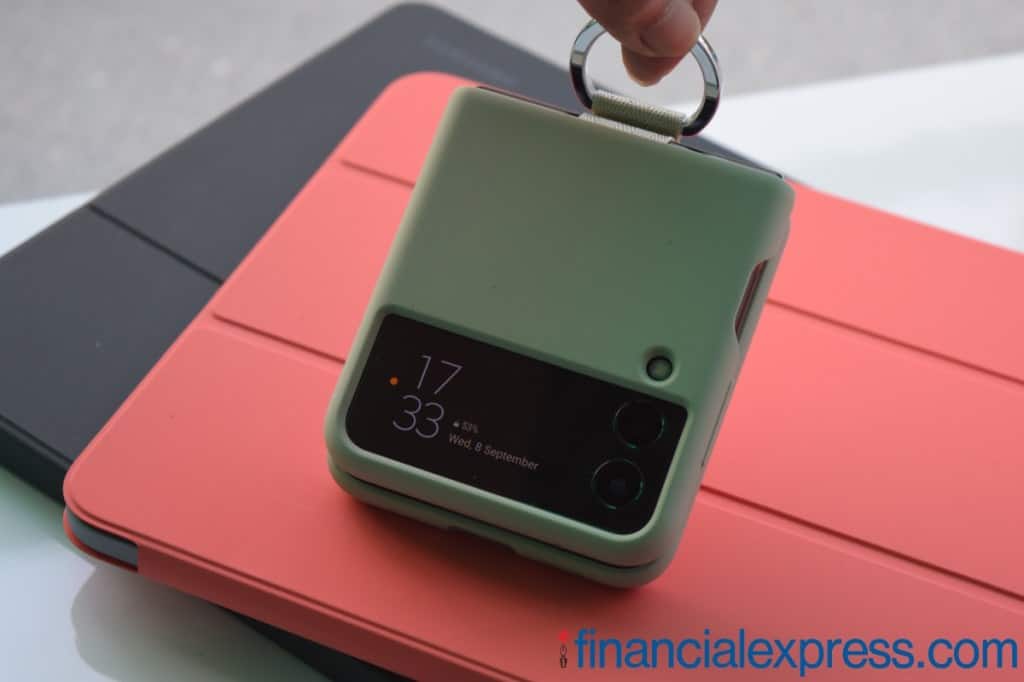 The Galaxy Z Fold 3 and Galaxy Z Flip 3 may have been cut from the same cloth, but they couldn’t be more different. The Flip might seem easier—to pull off—but it’s easier said than done. Here’s why that is: the Fold has its work cut out because its utility doesn’t need to be justified as much. A phone that turns into a mini tablet will be always easier to sell over a phone that turns into, well, nothing.

Remember, Samsung wants—and desperately needs—to make folding screen phones mainstream. And while it figures out how to make the Fold more affordable, the Flip must take on even bigger responsibility. It is the more affordable folding phone option right now, after all. The last Flip cost a whopping Rs 1.10 lakh at launch. The new Flip, just Rs 84,999. This means, today, you can buy a brand new ‘flip’ phone from Samsung that’s cheaper than a Galaxy S21 Ultra.

The price is surely compelling but that’s only one part of the whole equation. The other half is, whether—or not—the Flip 3 is in fact more useful—or practical—than the model that it is replacing, not just another novelty. The answer to that is still, complicated.

Look, there is no doubt that the Flip is a showstopper. It’s eye-catching. It’s a conversation starter. It’s got a fair share of nostalgia too. Which is to say, it isn’t only meant for ‘Gen Z’ even though that’s the demographic that Samsung seems to be targeting largely. But all this isn’t surprising now, is it.

If anything, the latest iteration—the Flip 3—only amps things up and for good reason. You’d absolutely want this high fashion-esque piece of tech in your life and Samsung will make sure you’d want it even more by luring you in through a gazillion other chic accessory ensembles it’s rolling out alongside. The ‘Galaxy Z Flip3 5G silicone cover with ring’ pictured above is sold separately for Rs 3,099 for instance. The Flip 3 also comes in a bevy of new dual-tone finishes although only two—black and cream—are making their way to India at this point in time.

The only other phone that can do all this today is the Motorola Razr 5G and while it’s surely striking to look at—and oh so very nostalgic—Samsung’s approach is more modern, stylish, and cohesive. Plus, it has way better specs. In a word, the Flip 3 offers a better package.

Durability is the most important factor when dealing with a folding screen phone like the Flip 3. While no one can guarantee how it holds up in the long-term, there are ‘several’ things that Samsung has done this year to ensure the Flip 3 is more resistant to wear and tear. The last Flip wasn’t too bad in this regard, so all the upgrades on top of that are welcome and much appreciated.

What’s impressive is that the Flip 3 has been given the same level of attention as the Fold 3—that costs almost double—and because its relatively more compact form factor means there are considerably fewer moving parts, the whole thing invariably gives you wee bit more peace of mind. At least, that’s how we see it.

So, what are these upgrades?

Well, for starters, the Flip 3 uses more premium and sturdier materials. The body is made almost entirely out of Corning Gorilla Glass Victus, and the main camera unit on the back has Corning Gorilla Glass DX. The Flip 3 also gets Samsung’s new armour aluminum frame—also seen in the Fold 3—which is said to be 10 percent stronger than the material used on the previous generation. Last but not the least, it is rated IPX8 which means it is water-resistant (up to 1.5m for up to 30 minutes) although there is still no protection against dust and debris.

From a usage point of view, both the hinge and magnets seem tighter. So does the flexible OLED. Samsung claims this folding screen is 80 percent more durable and while you’re still advised against peeling off the outer plastic, there are two big improvements here that instantly stand out. The touch experience is smoother and the pre-installed screen guard picks far less fingerprints. Even if you do manage to smudge it, you can wipe it off with a damp cloth—something you couldn’t do with the previous generation.

All this is not to say that you can throw caution to the wind. There is no getting around the fact that you’ve got to handle it with care. For what it’s worth, Flip 3 is a big bold step in the right direction.

Coming to that all-important inner screen, now, it may seem the same as last year with the size and all—there is also the crease which you’re bound to notice every once in a while—but flip over to the settings and you’ll find that it’s faster. It has a 120Hz refresh rate. Something that you’d probably not notice as instantly is the overall brightness. Samsung has cranked it up ever so slightly to aid outdoor legibility—which was a concern in the last Flip—but there is still some room for improvement.

The cover display has also—finally—got some degree of practicality in this generation. It is almost 2-inch now and slightly higher resolution so taking selfies in dual preview is less jarring. It can ‘display’ more information/cards and is customisable to some degree, but it is what it is—a parlour trick. The Moto Razr’s outer screen gives you both more real estate as well as more applications to justify its existence. Hopefully, the next Flip will try to address that.

Where the Flip 3 pulls no punches is in hardware. Expectedly, it’s packing flagship artillery. It has a Qualcomm Snapdragon 888 system-on-chip paired with 8GB of RAM and up to 256GB storage. While more RAM would have been nice(r) there’s no doubting the Flip 3’s potential. There’s enough power in there—plus support for 5G and Wi-Fi 6—and with Samsung’s excellent track record with software lately, the Flip 3 is both future-proof and future-ready.

There are a couple of new features that the company has added to it to squeeze more out of its unique form factor. Flex mode panels let you prop the phone at an angle of 90-degrees and give you additional controls in the bottom half while your main app is running at the top. This is particularly useful for apps that do not support flex mode by default yet. Similarly, you can now force multi window for all aps to open them in pop-up view or split screen. All this is part of a dedicated section—called Labs—that’s part of Samsung’s One UI version 3.1.1.

Galaxy Z Flip 3 | what could have been better

Samsung’s big focus with this year’s folding phones was making them as compact—and solid—as possible. That leaves room for two potential loopholes. There’s just not enough space for sizing up the battery or putting elaborate cooling. And the Snapdragon 888, well, it’s an established resource hog. The impact of all this is noticeable, even more so in the smaller Flip 3.

Capacity remains unchanged—3,300mAh—from last year and battery life is average at best. Your mileage may vary depending on usage, but the Flip 3 can barely go through a day without being plugged in even when you’re being watchful. Standby times aren’t great either. Charging also, is capped to 15W—wirelessly, it’s just 10W—and Samsung doesn’t bundle any charger in the box at all, adding insult to injury.

It is not very surprising that the Flip 3 runs warm when stressed. The only good thing is it doesn’t come at the cost of experience.

The dual speakers are similarly nice to have and generally pump out good audio, but we’ve surely heard better from Samsung. The Galaxy S21 Ultra comes to mind. It also gets you tighter haptics. For some curious reason, the Flip 3 does not support DeX either.

Average cameras are becoming a recurring theme inside folding phones and the Flip 3 doesn’t change that. The rear camera setup is being carried forward, so you still get dual 12MP cameras (wide+ultra-wide-angle). The front camera—which is 10MP—is also same as the last Flip.

The main camera takes well-detailed photos in good light with a fair bit of over-sharpening happening in post. The ultrawide-angle camera generally takes softer photos. It’s not a bad camera phone, per se, but it pales in comparison to Samsung’s own work, aka Galaxy S21 Ultra. The effect is even more pronounced in low light where the Flip 3’s cameras are easily bested by a barrage of phones from Xiaomi, Vivo, not to mention, Samsung itself.

There has been a lot of pessimism around folding phones. No one can say it was totally uncalled for especially after Samsung’s own first attempt was a big reality check. But what’s remarkable is how the company sailed through all that criticism and got better at it eventually.

The Flip 3 and Fold 3 represent the pinnacle of Samsung’s engineering and R&D prowess. Both cater to two different target audience. We’ve already covered who the Fold 3 is for, so be sure to check out our full review here. As for the Flip 3, that’s the real MVP of Samsung’s current line-up, offering an eclectic mix of style and substance for those for whom ‘regular’ just won’t do.

Aside from average cameras and battery life, there’s not a lot to complain about here which honestly, is a big win for Samsung. The pace with which it’s churning them out, it won’t be long before folding phones turn from a mainstream alternative to mainstream to an absolute buy. Could be flipping amazing, what do you think?