PlayStation 5: Shut up and take my money already Sony!

Sony has finally revealed the full design of the PlayStation 5 after keeping the console a closely guarded secret for months. 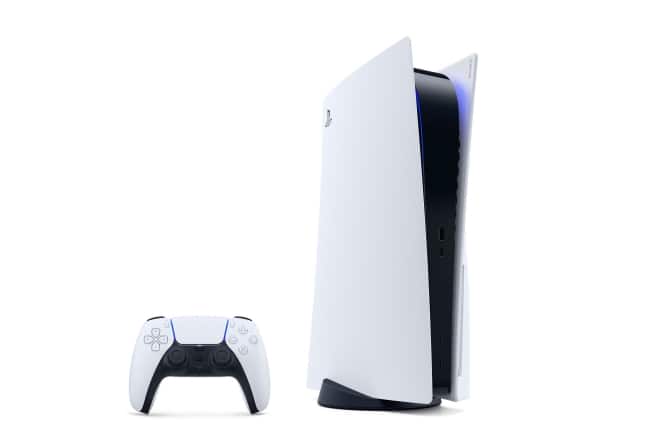 This is the PlayStation 5.

Sony had promised a first look at the future of gaming on the PlayStation 5, at its June 11 virtual event, and boy, it delivered! Don’t mind me, I like the Xbox Series X too –a lot actually—but if I were to pick one console right now, and be rest assured I have something futuristic in my hands to both gawk and play with, it will be the PS5. Period.

To be totally honest, I did not expect Sony to reveal the console at a game-focused event. But at this point of time, even a silhouette would have quenched my thirst to see what the console would eventually look like. I had some idea after Sony had announced the PlayStation 5 DualSense wireless controller in April, but hey, there is a difference between an idea and the actual thing. The real deal is the real deal.

And then out of nowhere, Sony dropped the PS5 in “almost” its full glory, after showing off over 25 high-profile games that you will be able to play on it in the coming days. You know Spider-Man 2 and a new Horizon title, there is plenty of good stuff to look forward to. But the console itself, wow!

It is the sort of thing you expect Alienware to make. Or BMW maybe. I don’t know, maybe even Jony Ive will approve of the PS5’s sleek, striking contours. The thing looks like it was stolen from Apple’s “spaceship” campus in Cupertino. I can go on and on you know, but I am sure you get the gist. You can see the renders. Speaking of which, the first thing you will notice about these renders is that they look like concept art. But they are not. They are the real deal.

The PlayStation 5 has a dual-tone design with a white and black colour scheme. The exterior is white (and a bit curvy) while the middle portion is black. Sony likes to show off its consoles standing tall and all that, but you will be able to prop it up horizontally too. Vertically, the PS5 looks like a skyscraper from a big budget sci-fi movie. The console has already visited meme-city on Twitter where it has been compared with everything from a router to Sauron’s tower. At least, no one’s compared it with a fridge, yet.

Unlike the past, Sony is prepping to launch two different PS5 consoles at the same time. There is one with a built-in 4K Blu-ray drive, and another without it. The latter is called the PlayStation 5 Digital Edition. This version will be slimmer and possibly also slightly cheaper (than the disk option).

Sony’s hallmark blue LED lighting seems more prominent this year. The same is true about the controller as well, by the way. Sony is not showing off the console’s back just yet. The console has USB-A and USB-C ports at the front.

Sony has also revealed the full line-up of first-party accessories for the PlayStation 5, including a DualSense charging station, an HD camera, a Pulse 3D wireless headset, and a media remote.

All in all, the PS5 has a design that really stands out, and it will stand out, in your room. It is like a high fashion thing, the PS5. While its direct competitor is a Hulk-like monolith.

But it is not just about those futuristic looks

Design is not the only thing that makes the PS5 feel like the future (of gaming). Even though it has hardware that is comparable to the Xbox Series X’s (you can read more about it here), it can do a couple of things “more” that has me hyped up about Sony’s console.

Unlike the Xbox Series X, the PS5 opts for variable frequencies for both the CPU as well as the GPU. Essentially, Sony’s console has a pre-set power budget that is linked to its thermal management system, which means your performance may vary depending on how demanding your game is. This means, the “PlayStation 5 can hit GPU frequencies way, way higher than we expected. Those clocks are also significantly higher than anything seen from existing AMD parts in the PC space,” PS5 lead system architect Mark Cerny had said in an interview with Eurogamer recently.

By offering less compute units (than the Xbox Series X) but each running at a variable frequency, Sony is hoping to squeeze higher performance from the console. This will also give game developers the flexibility to tell their story the way they imagined, rather than being limited by a fixed ballpark figure.

Another area where the PS5 seems to be taking the lead over the Xbox Series X is through its custom solid-state drive storage or SSD solution. Sony is offering 825GB on-board storage and 5.5GB/s of peak performance. The Xbox Series X’s 1TB NVME SSD can do only 2.4GB/s. The PS5 also supports expandable storage with regular NVMe PC drives, and even though you’d want to get the latest PCIe 4.0-based drives for better performance (that would also be more expensive), at least Sony is giving you that option. The Xbox Series X supports custom expansion cards only.

It is too early to judge the two consoles, even with all the specs Sony and Microsoft have thrown into the wild, but just on the basis of these specs and all-round design, one thing’s certain, Sony pulled a rabbit out of its hat last night. Pair that with the recent Unreal Engine 5 demo by Epic Games, and I can say only one thing, shut up and take my money already Sony!