The Moto G32 comes with mixed bag of specifications including few specs that are common in the modern budget phones of today and few that can give this phone an edge over it rivals. 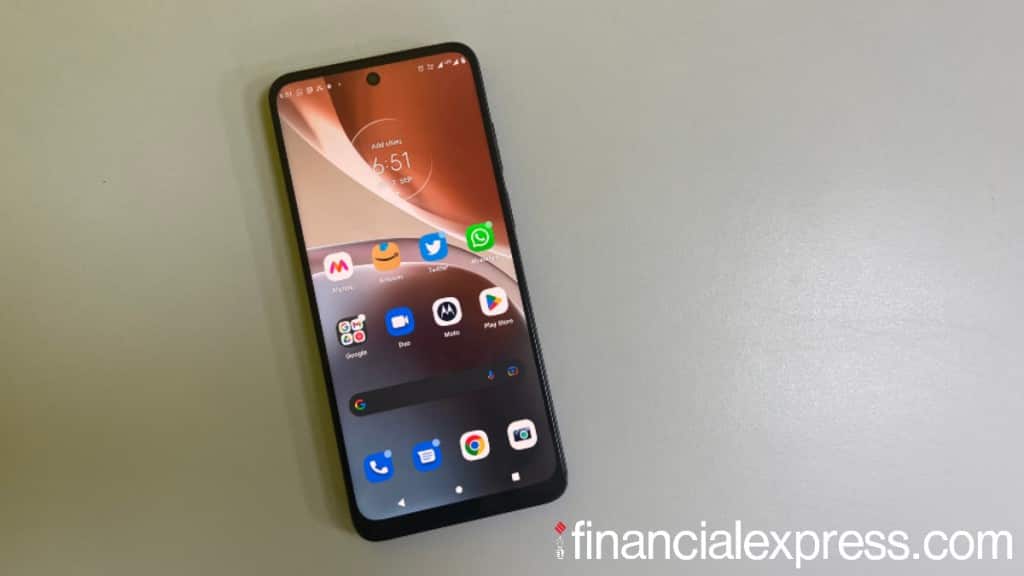 Moto G32 is an affordable phone with mixed bag of specifications

Motorola phones are rarely about aesthetics. In the league of brands like Oppo, Xiaomi and OnePlus that are mass-producing phones focussed on design, Motorola makes smartphones that prioritise usability over looks. Moto phones are about practical features, less bloatware and a good user experience. May be not all, but at least that’s what most of the Moto phones aim to deliver. With the same aspirations, Motorola has launched the Moto G32 smartphone in India.

Debuting under the company’s affordable line of phones, Moto G32 comes with specs that puts it in race against the likes of Poco M3 Pro, Realme 9i 5G, Redmi Note 10T and others. The Moto G32 comes with mixed bag of specifications including few specs that are common in the modern budget phones of today and few that can give this phone an edge over it rivals.

The new Moto G32 features a 90Hz 6.5-inch full HD+ display, a 5000mAh battery with 33W fast-charging support, a triple rear camera setup with a 50MP primary sensor and a 16MP selfie shooter, and a Snapdragon 680 SoC paired with 4GB of RAM under the hood. Priced at Rs 12,999, the phone is available in Mineral Gray and Satin Silver colour shades. Let’s break down these details further to know if Moto G32 stands a chance against its rivals.

Also Read
Snapchat gets dual camera feature: How to Snap with both front, rear cameras together | Tech tips
Intercity Legends: Zomato launches new service to order food from other cities; Here’s how it will work
Jio to launch its True 5G services in India by Diwali, pan-India coverage by Dec 2023
iPhone 14 launching on September 7: Price, specs and everything else we know so far from rumour mills

The Moto G32 smartphone features a 6.55-inches IPS LCD touchscreen display. The 90Hz refresh rate ensures smooth switching between apps and over all lag-free experience. The phone sports sleek bezels that contribute to the massiveness of the display and that can be both good and bad for some users. Good that it lets you enjoy a great sized display under Rs 15,000 price bar and bad that it can feel too big for some hands. I personally found it difficult to use the phone single-handedly, at times, having to use both hands for accessing basic functions like dialling up a contact or looking up for a WhatsApp chat.

The phone features an all-plastic build akin to many other phones in this segment. But somehow it does not look or feel cheap in hands. The Moto G32 looks good and feels light both in hand and in pocket. The rear panel of the phone has a square camera module that features a 50MP primary camera, an 8MP ultrawide camera and a 2MP macro camera with autofocus. The mild bump of the module does not tamper with the design of the phone and owns the place where it’s positioned. It does not fee bumpy or as obvious like in several other budget phones.

The volume rocker and fingerprint reader are placed on the right side of the phone, slightly above their usual position in other phones. I took some time to get used to it. The side-mounted fingerprint reader saved my phone’s display from messy smudges.

The display has a peak brightness of 600 nits and is viewable even under harsh sunlight. However, it can be tough to use the phone when brightness is set at the minimum.

The phone supports speakers with Dolby Atmos support that let you enjoy your favourite OTT shows, music videos or video games. During my period of testing this phone, I rewatched an entire season of Friends on Netflix and listened to some popular Punjabi music tracks on my way to office. The two powerful stereo speakers in the phone capably deliver loud, clear and punchy sound. At maximum volume, the setup gets loud enough and the minimum (volume) manages to retain the separation and clarity of the sound. Overall, no complaints in this department.

I recently had a chance to see my favourite movie star at an event. He was right in front of me, some two or three rows away, standing at the stage. I quickly took out the Moto G32 from my bag to capture him in my camera but soon realised that the smartphone lags on its camera capabilities. The images were clicked from far and in the warm yellow lights of the hotel. They were distorted, had too much noise, lacked detail and focus.

The Moto G32 camera, despite sounding impressive on paper, fails to impress with its capabilities. The phone fails to capture distant subjects. While the daylight photos are decently lit, the low light image results have noise, poor focus and no details in them.

Motorola Moto G32 smartphone is powered by the Snapdragon 680 processor paired with Adreno 610 GPU. The phone, unlike its contemporaries, comes in just single 4GB RAM and 64GB storage variant. The phone also lacks 5G support, a technology that is coming soon to India and several smartphones in this segment are coming with the support.

Moto G32 is not for gamers. This is a smartphone for playing light games like Candy crush or Snake rewind. Playing heavy games on this leads to heating of the device and also impacts its performance. The phone runs on the Android 12 operating system with a clean UI and no bloatware apps. The company also promises an upgrade to Android 13 and three years of security updates.

My battery dead phone was fully charged in less than 1.5 hours. The smartphone managed to last one full day upon normal usage which involved calling, scrolling through social media apps, watching couple of music videos and shows on OTT apps, clicking few photos around and playing light games. The phone gets full charged in 1 to 1.5 hours using its powerful 33W charger which isn’t common in budget phones. You get mostly 10W or 20W charging options in this price range.

SHOULD YOU BUY MOTOROLA G32?

Buy Moto G32 if you are looking for phone that offers great battery life. The clutter free UI, immersive sound quality and good battery can together be a great deal for buyers but the lack of 5G support, single storage model and poor low-light camera performance are some of the reasons that prevent Moto G32 from becoming the first choice in its segment.