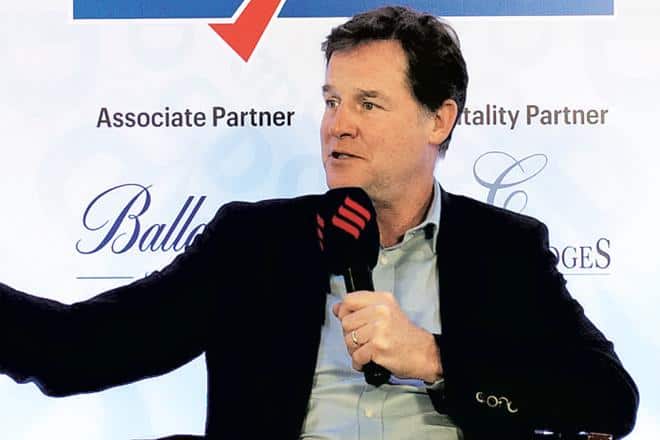 India, the US and Europe would be architects of the new rules of Internet and these “three planets” will determine if the world will head for an open or closed Web, former deputy prime minister of the United Kingdom Nick Clegg has said. Now the Vice-President for Global Affairs and Communications at Facebook, Clegg was speaking at the Express Adda in Delhi Friday evening (detailed transcript will be published soon).

Clegg joined Facebook last year against the backdrop of the social media giant facing immense pressure over issues like bypassing of government regulation, data protection and fake news. His visit to India comes at a juncture when law enforcement agencies are pressing for social media companies to keep data within the country and share encryption keys to help track content that can be a threat to national security.

Clegg was deputy PM between 2010 and 2015, having led the Liberal Democrats into a coalition with David Cameron’s Conservative party. In 2017, he lost his seat in the general elections and moved to Silicon Valley in January 2018.

Also Read
How to send WhatsApp messages from website without saving a number
10 hidden Google tricks we bet you didn’t know!
WhatsApp Web: How to use multiple accounts and sessions in browser
Here’s the ultimate rundown of everything F1 – F12 keys do

At the Express Adda, which is a series of informal interactions organised by The Indian Express Group featuring those at the centre of change, Clegg fielded questions on the influence of Facebook and controversies around the company, Brexit, and nationalism, as well as on his talks with the Indian government on issues such as Internet regulation.

“Where the data is stored is not relevant… in Denmark or Texas. If the Indian authorities… want to get rapid access to data, particularly when it comes to pursuing data that extends beyond Indian jurisdiction, mostly when dealing with anti-terrorism operations, the best way is not to build a warehouse outside Delhi where you can physically keep data. It is having a new agreement between the Indian and US governments, particularly under the new Cloud Act, which facilitates such agreement,” Clegg said.

He underlined that India would play a leadership role in determining the new rules of the Internet and that countries would follow the stand taken by it. “There are three basic planets which will decide the fight for open or closed Internet: America, Europe and India. China has already made that decision. Of those three, we can roughly guess where America or Europe is going to go. But there is a battle over where India is going to go. Will India go towards data nationalistic direction and borrow elements from China, or, as an open democracy and a great entrepreneur nation, will it embrace the openness of the Internet? These decisions, where you regulate, where you draw the line on content, elections, privacy, data portability — and the rules that need to be put in place — all of those are still to be written… My only plea would be that those decisions are taken with a view to the future, not just the present, and also with an understanding that what India does, many other countries will follow.”

Clegg admitted the challenges regarding WhatsApp, especially over sharing data with law enforcement agencies. “India is the world’s largest WhatsApp nation… How do we cooperate in a responsible and mature fashion under the law in response to legally sound requests from law enforcement agencies… that was the subject of a lot of discussion (with the government). And I found it productive. Data is very powerful weapon to defeat terrorism and criminality,” he said.

While agreeing that Facebook is in “a very controversial space”, Clegg said it was “foolish to be over-cynical about technology”. “Facebook has had to learn from its mistakes and has made big mistakes… Generally, there is a great deal of suspicion about big corporate companies… There are, quite understandably, great concerns about privacy. And we are going through a tech clash. The pendulum is swinging, as it often does when you disrupt technologies. At the beginning, people think that the new technology — in our case, the social media — is a solution to all problems. People like Mark Zuckerberg walk on water and can do no ill… And now all our problems, apparently, are the fault of social media… It is very naive to overpraise technology but it is also foolish to be over-cynical about technology. The truth is that technology is not good or bad. It can be used by good or bad people for good and bad things. How we set boundaries to technology, how do we amplify the good or minimise the bad… (is the question).”

On the challenges threatening global economy, Clegg referred to the domestic politics of Britain. “One of the great dilemmas in modern politics is that good economics and good politics are increasingly pulling apart. We assumed that if we do good economics, the politics will flow… In Britain now, there is a whole class of politicians who are absolutely adamant that Britain should do something which every single economist will tell you will make the people worse off. And they believe it is a patriotic act. So doing something which is economically self-harming is now considered the acid test of patriotism. This is very new,” he said.