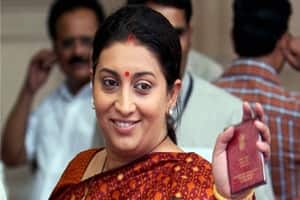 Smriti Irani said the onus of filling up the teaching posts lies with the central universities which are autonomous bodies. (PTI)

In addition, women candidates will also be provided maternity, child care leave for up to 240 days in the entire duration of their M.Phil or Ph.D degrees.

HRD Minister Smriti Irani, who announced the relaxation of norms by UGC at a press conference here, said the government aims to boost the entry of women and the differently-abled in the fields of research.

Last week, Irani, while releasing the domestic rankings for Indian educational institutes, had announced that the government had asked the regulator to consider relaxing the norms for women and the differently-abled.

Speaking at the conference where UGC chairman Ved Prakash and senior HRD officials were present, Irani said another key decision taken by the Commission pertains to autonomy about which “there has been a lot of debate” in the country.

In its meeting today, the UGC has decided that a college which will be awarded the highest grades in two consecutive cycles of six years and ensures the highest grade in the third cycle will be granted autonomous status if it can get a ‘no-objection certificate’ from the university concerned.

“This will grant them freedom to design curricula, prescribe syllabi, assess student performance and declare student results,” she said.

Irani said there has also been “widespread debate on licence raj and vice grip of regulator on institutions of higher education”.

In this context, she said, it has also been decided that if an institute is accredited with highest grade in two cycles by NAAC and continues to do so in the third cycle, the validity of accreditation would be made seven years instead of the present five years.

At the press conference, Irani also announced that in case of relocation of a woman Ph.D or M.Phil scholar due to marriage or otherwise, research data shall be allowed to be transferred to the university to which the scholar intends to relocate, though subject to certain norms.

UGC chairman Prakash said the plan is to give “freedom” to institutions which are consistently doing well.

At present, there are around 500 autonomous colleges in the country, he said.

Irani told reporters that the UGC meeting has decided to widen the scope for granting 12-B status to colleges which makes them eligible for accessing grants from the government.

A college, affiliated to a university for a continuous period of 10 years and accredited by NAAC, may be granted this status, subject to certain norms, she said.