School children in Haryana to recite Gita shlokas, do Yoga 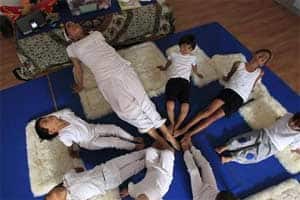 The Haryana government today said it will introduce teaching of Bhagavad Gita shlokas in schools from the coming academic session while Yoga, taught by state’s brand ambassador, Baba Ramdev, will also help the children stay healthy.

“Students in schools will be taught shlokas of Bhagavad Gita,” said State Education Minister Ram Bilas Sharma in reply to a question raised by BJP MLA Tej Pal Singh in the Assembly.

“In coming days, you will see that our students will recite Gita shlokas while Yoga exercises as suggested by Baba Ramdev will also be taught to them, which will help the children stay healthy,” he said.

Sharma noted with concern that there was a widening gap between standards of the government schools and the private schools and colleges, which he said had mushroomed all over the state.

Tej Pal Singh in his question had sought district-wise details of the number of schools and colleges opened and buildings constructed during the last ten years (of the Congress rule) in the state.

The Minister also expressed concern that some private schools were telling children to only speak in English, “ignoring our own language of Hindi and even Haryanvi.”

“This cannot be tolerated,” the Minister warned.

Meanwhile, the Assembly was informed that a maximum of 267 new schools were opened in Mewat district during the last ten years followed by 147 in Bhiwani, 107 in Gurgaon, 15 in Rohtak and 8 in Jind district.

As many as five new colleges each were opened during the last ten years in Rohtak and Rewari districts while none in Faridabad and Gurgaon districts, the Assembly was further informed.