JEE (Main) 2015, the first step for admission to IITs as well as NITs, IIITs and other prestigious engineering institutes… 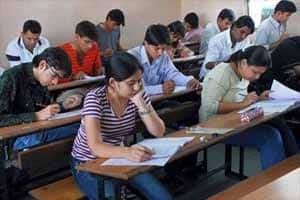 JEE (Main) 2015, the first step for admission to IITs as well as NITs, IIITs and other prestigious engineering institutes in the country, did not throw up any surprises for the candidates who appeared in the offline mode of test conducted today by the CBSE.

Over 13 lakh candidates have registered for the offline and online mode of Joint Entrance Examination (JEE) Main 2015 divided into Paper I and Paper II (BArch/Planning).

According to candidates, Paper I of the JEE Main Exam, held in the morning session, followed the pattern of questions on Physics, Chemistry and Maths asked in previous years.

Paper I (BE/BTech) of JEE (Main) is an eligibility test for the JEE (Advanced) that candidates have to appear in for admission to the undergraduate engineering programmes at IITs.

The multiple-choice questions — 30 each in Physics, Chemistry and Maths — were conceptual and analytical as well as balanced, the candidates said.

Paper II (BArch/Planning) was held in the afternoon session from 2 pm to 5 pm.

Priyanshu Sharma, a civil engineering aspirant, said the difficulty level of the paper was as per normal standard.

“The paper was a balanced one with the difficulty levels being in accordance with the traditional pattern. I could not time my paper properly though. Difficulty level of questions on Physics and Chemistry was moderate,” he said.

Neha Bhardwaj, who appeared in the test in Gurgaon, said, “Physics and chemistry questions were fine. I found the mathematics portion a bit tough and analytical.”

The online test of Paper 1 will be held on April 10 and 11, for which about 1.8 lakh candidates have registered themselves.