Hold as many TETs as possible: Madras High Court to Tamil Nadu Govt 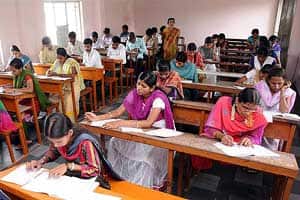 In order to fill up the plenty of existing vacancies for qualified teachers in state-run and aided schools across the state, Madras High Court has directed the Tamil Nadu Government to hold as many Teacher Eligibility Tests (TETs) as possible every year.

“The government shall hold as many as TETs as possible, so as to comply with the provisions of the Right of Children to Free and Compulsory Education (RTE) Act, 2009 and in the absence of TET qualified teachers, aided schools have no other option except to appoint teachers without TET qualification,” Justice D Hariparanthaman said.

He was passing orders on petitions by teachers G Nagarajan and Chitra, working in aided schools without TET qualification.
Petitioners submitted that the TET was conducted only once (since April 2013) but the requirement of teachers in the schools was huge. After the RTE Act came to force in 2010, it was mandatory for state-run and aided schools to appoint teachers who had cleared TET.

The Judge had in April 2013 said they should be allowed to continue in their posts for five years, during which they should clear the TET. The order was passed taking note of the fact that no TET hands were available.

Though these teachers were qualified to teach in aided schools, they did not have the mandatory TET qualification and they should be granted temporary approval till the completion of a five year period which started in 2013, he said.

“It is made clear that they should get qualified in TET within five years, otherwise, they would automatically go out of employment,” the judge added.