Barring Delhi and Kolkata, which showed a decline of three per cent and 18 pct in Jan, most cities registered positive growth in hiring activities. 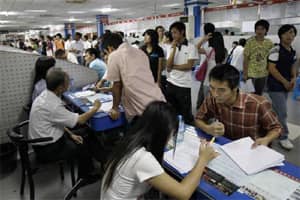 Online hiring activity in the New Year has started on a steady note and the optimism in the job market is likely to continue in coming months as well, according to a Naukri.com report.

On a month-on-month basis, the index witnessed a slight increase of two per cent.

“Despite the January Job Speak index registering a flat growth over last year, the economy is showing signs of revival and its effects will be visible on the hiring landscape,” Naukri.com Executive Vice President and Chief Sales Officer V Suresh said.

An in-depth analysis revealed that while telecom, pharma and BFSI sectors recorded growth, few sectors such as BPO and ITES as well as construction and engineering saw a year-on-year decline of eight per cent and 14 per cent respectively, in the index in January 2015.

“Positive hiring sentiments in sectors that employ huge number of people viz. IT, BFSI, telecom and pharma is likely to have an impact on the overall eco-system and we can expect the momentum to pick up in the coming months,” Suresh added.

Positive hiring activity was seen for professionals across top functional areas. The demand for HR, accounts & finance and IT software professionals grew by 15 per cent, 6 per cent and 9 per cent respectively, in January 2015 over January 2014.

However, hiring for marketing and advertising professionals remained muted.

City-wise, barring Delhi and Kolkata, which showed a decline of three per cent and 18 per cent, most cities registered positive growth in their hiring activity in January 2015 as compared to January 2014.

Pune and Bangalore saw the maximum growth with their index going up by 14 per cent and 13 per cent, respectively. PTI DRR STS 02131316