As the status of job availability becomes a matter for concern among Indias, according to the latest annual household survey by labour bureau, the unemployment rate has reached 5 percent which is the highest in the last 5 years. 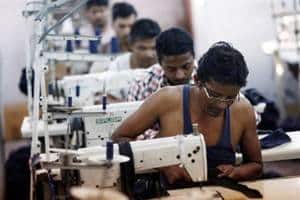 As the status of job availability becomes a matter for concern among Indias, according to the latest annual household survey by labour bureau, the unemployment rate has reached 5 percent which is the highest in the last 5 years. India’s unemployment rate, as measured in the surveys by Labour Bureau, has been continuously going up. While in 2011-12 session it was 3.8 %, it went on to become 4.7 % in 2012-13, and 4.9 % in 2013-14. The employment-unemployment survey is a result of efforts between April 2015 to December 2015, in 1.6 lakh houses, covering almost 8 lakh people. Urban areas have more jobs and pay better than the rural sector. But the women have been hurt the most. Unemployment for female job seekers has now gone as high as 8.7 percent, according to the annual report which has been done for the fifth time.

This is now a matter of great concern for the government, with the economic growth in the country not getting transferred to the employment scenario. Labour Bureau falls under the Ministry of Labour and Employment and according to its survey only 47.8 % of the population who was the part of the survey, was employed. The sample size of the survey matters too and according to many experts, the actual figures can be even more dismal. Expectedly, urban areas obviously have a greater number of jobs when compared with the rural areas. While the job is secure for more than 80% of the population in urban areas on an average, but the same in rural areas will be 53%. Added to that almost half the rural population have jobs for less than a year, because of seasonal agricultural patterns.

In the survey, it was also found that the ratio of self-employed or salaried employees have declined and the contractual employment has been on the rise. This survey is the first big finding since Narendra Modi-led government took charge, and it shows that the situation has not improved if not declined since the last UPA government, even because of several overhauls of policies. According to the Indian census 2011, taken five years ago the population of people over 15 years of age stands at Rs 45 crore, which makes 5 percent as more than two crores and 30 lakh unemployed job seekers. Now, add to this the rural population who do not get work for the whole year, which can take the toll of more than a whopping 15 crore population.

The worse news is that a few years back the economic growth reported was not as high as it is now, still it has not been transferred to the job sector. Initiatives like Digital India and Make in India does not appear to have created much of an impact.