Beyond IT/BPO, new jobs not being created: 2/3 of record FDI only in services

The challenge of job creation in India, specifically in the transition of the over half its workforce employed in agriculture, gets much tougher keeping in view the overreliance on service to drive this growth. Globally, such labor market transitions, including in the ASEAN boom of the mid-nineties and the Chinese growth story, have been achieved through a big manufacturing push. 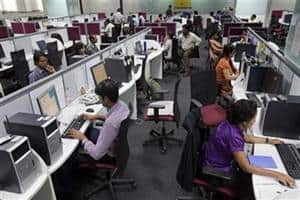 Trigyn Technologies shares were locked at Rs 114.85 on BSE on Thursday, up 5% from yesterday’s close, which, in turn, was again 5% higher than Tuesday’s close. (Image: Reuters)

A significant share of the record foreign direct investment (FDI) equity inflows — at an all-time high of $41 billion in 2015-16 — have largely been routed to the services sector, which is reflected in employment buoyancy in these sectors, while most manufacturing sectors are faced with a progressive contraction in labour numbers, according to government data.

Of the total FDI received by India in 2015-16, the three top sectors, services (including finance, banking and insurance), computer hardware and software and the trading segment, accounted for inflows worth $16.6 billion, or over a third of the total inflows received.

On the other hand, three of the large manufacturing sectors that have been shouldering the brunt of employment generation over the years, construction development, automobiles and drugs & pharmaceuticals, witnessed a net decline in FDI inflows during the year.

Construction development (including housing, township and built-up infrastructure), which has traditionally been the second largest FDI destination after the services sector, saw a sharp fall of 85 per cent in FDI inflows over the previous year.

The data would have been worse had it not been for the IT/BPO sector, where the employment surge during the last four quarters was higher than all the other eight-labour intensive sectors, including key manufacturing sectors such as textiles, leather, metal, automobiles and jewellery, put together.

It needs to be mentioned that when money comes in for a greenfield project, there is generally a lag of 2-5 years before it can translate into jobs and also that the jobs data has a thin sample size. D K Pant, chief economist, India Ratings said, “While services traditionally have accounted for highest FDI, with issues of land acquisition and low demand both domestically and globally, it is very difficult for any investor to put money.”

These figures are worrying since almost one million new people enter the job market every month.

The challenge of job creation in India, specifically in the transition of the over half its workforce employed in agriculture, gets much tougher keeping in view the overreliance on service to drive this growth. Globally, such labor market transitions, including in the ASEAN boom of the mid-nineties and the Chinese growth story, have been achieved through a big manufacturing push.

In India, services continues to dominate, the government’s ‘Make in India’ campaign notwithstanding. The surge in e-commerce and startups helped software top the FDI equity charts in calendar year 2015. Within manufacturing, India is yet to move beyond assembling units in the FDI value chain. “However, we are seeing encouraging early signs with some foreign investments directed towards establishing full-fledged manufacturing facilities,” according to an analyst in Kotak Institutional Equities.

The government’s SEZ-led manufacturing revival plan isn’t showing much promise. “A more prudent strategy would be a concerted campaign to improve the country’s business environment. The gains, especially to small and medium enterprises, from simplifying procedures and limiting regulatory discretion would be much more than those from government’s fiscal and other incentives to firms in SEZs,” an analyst with a rating agency said.