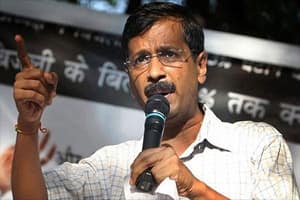 Addressing traders, Kejriwal promised to rationalise VAT on products, which were higher in states. (PTI)

Kickstarting its sessions to connect with the masses and woo voters ahead of Delhi assembly election, the Aam Aadmi Party (AAP) today launched a five-point programme for the youth, promising 8 lakh jobs, vocational training, setting up of 20 new colleges, sports facilities and having wi-fi connectivity across Delhi.

The party formally launched the Delhi Dialogue, an interactive initiative to connect with voters of different stratas of society, and spelt out its strategy for youth. The party will come up with a 50-point programme catering to different sections of the society.

Highlighting the issue of admission, faced by students especially after class XII, AAP’s National Convenor Arvind Kejriwal said the main cause of the the problem was lack of infrastructure in the education sector.

“No new college has been built since last 15-20 years, which is leading to this problem. Giving education to the these students will be government’s responsibility. We will double the number of existing seats and construct 20 new colleges for the youth.

“Many villages have also complained about lack of educational institutions. The government will build colleges in these villages to ensure that the students there get admission,” Kejriwal said at a function held at Jantar Mantar here.

He said if his party voted to power the new government will also ensure that students get loan for pursuing their education.

“The government will also be a guarantor to these students so that they don’t have to mortage their property and valuables to get education,” he said.

The AAP chief also tried to woo the youth by making Delhi a wi-fi city.

“We are working on the details to have wi-fi across Delhi,” he said.

The former Chief Minister said efforts would be made to fill over 50,000 vacancies of doctors, teachers, nurses and other professionals in the Delhi government.

“The colleges the government would build will be designed in a way that students won’t have to look for jobs. It will have incubation centres.

After passing out, the student can be given a facility to carry out his venture and we will also help to get loan through banks.

“We will create the Delhi Skill Mission, which will help generate 8 lak jobs in Delh,” he said.

Kejriwal said his government will not “snatch” the employment of youth, but work towards it. He said lack of infrastructure and wrong policies were leading to business moving out of the National Capital.

“Few years back, Delhi had some 29 industrial areas, but today it has come down to 7-8 because of lack of power, road and water. We will ensure that these industrial areas have upgraded infrastructure so that industries can again come back. We will also reduce VAT,” he said.

Kejriwal said his government will focus on skill development of youth and train them in new areas.

“There are some 1800 MCD, 1200 Delhi and some 1000 private schools which have grounds, but are closed after working hours. We will open all of them.

“The government will adopt sports talent and promote them so that they can compete at the national and international level. We will also get rid of politicians and bureaucrats from all the sports bodies, which will be managed by sports experts,” he said.

Expressing concern about the growing drug menace in the country, Kejriwal said his party will ensure that the national capital does not become a second Punjab.

“The party has decided to provide mobile governance to people following which Delhiites can connect to government through their smartphones. People can also see government’s work and even discuss their problems with government on their phone due to which city can be made corruption-free,” AAP leader Ashish Khetan, who is heading the Delhi Dialogue team, said.

Khetan also said that there are several heritage sites in the national capital, but tourists, including foreign tourists, go to other countries.

“We have also plans to make Delhi a tourist hub after coming to power,” he said.

Another senior party leader Yogendra Yadav also said, “AAP has initiated new rules of politics in Delhi. We have sought suggestions of people to make blueprint of our election manifesto.I would also like to know from BJP and Congress to adopt such pattern and campared their manifestos to ours which one is good.”

Yadav also said that party will focus on different issues like women security, employment, education, health and among others. The next round of Delhi dialogue would be on November 26, the foundation day of the party.