IRCTC users alert! You won’t be able to book tickets on irctc.co.in e-ticketing website if using these systems

Do you book Indian Railways tickets on IRCTC next-generation e-ticketing website? You will soon have to upgrade your system if you are using these operating systems… 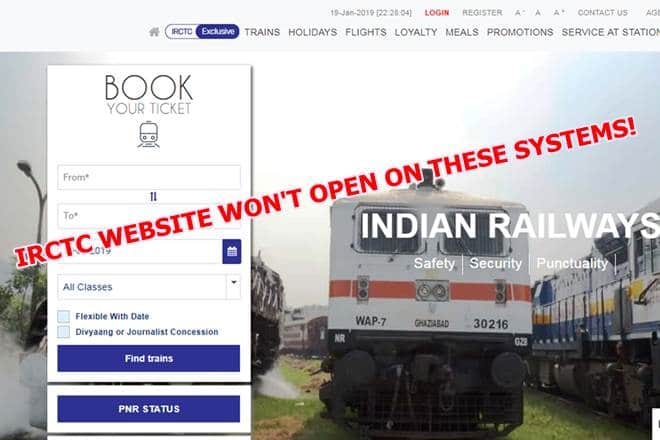 Last year, the IRCTC website was upgraded in a bid to make it more user-friendly.

Do you book Indian Railways tickets on IRCTC next-generation e-ticketing website? You will soon have to upgrade your system if you are using Windows XP or Windows Server 2003! According to a latest notification by IRCTC on its website irctc.co.in, the e-ticketing website is migrating to TLS 1.2 to enhance its security features. Since TLS 1.2 is not supported by older operating systems like Windows XP and Windows Server 2003, users with these OS will not be able to access the IRCTC website soon. For this, IRCTC has advised its users to upgrade to operating systems higher than Windows XP amd Windows Server 2003.

The Windows operating systems on which the new next-generation IRCTC website will function well are listed as follows:

The users who book tickets on IRCTC, pay through online transactions. For making the online transactions, they either use debit card, net banking, credit card or mobile wallets. In order to make the IRCTC website more secure for all online transactions, it was migrated to TLS 1.1 and TLS 1.2. However, the number of people using Windows XP is now much less in the country. Most users have resorted to Windows 7 or Windows 10, states IRCTC.

Last year, the IRCTC website was upgraded in a bid to make it more user-friendly. This has resulted in more number of people booking online tickets, which in turn, has decreased crowds of people at the various Railway Reservation Centers, coming in for booking tickets, states IRCTC. The upgradded IRCTC website has many new features for the convenience of passengers such as checking available trains without logging in, waitlist prediction feature etc. In order to address round the clock queries of railway passengers, an Artificial Intelligence (AI) based chatbot called ‘Ask Disha’ (DISHA- Digital Interaction to Seek Help Anytime) has also been introduced on IRCTC’s website and on IRCTC Rail Connect Mobile App.