According to Northern Railways, the oscillation trials have been successfully completed and it has been issued with a speed certificate by the Research Design and Standards Organisation (RDSO) for 130 km per hour. 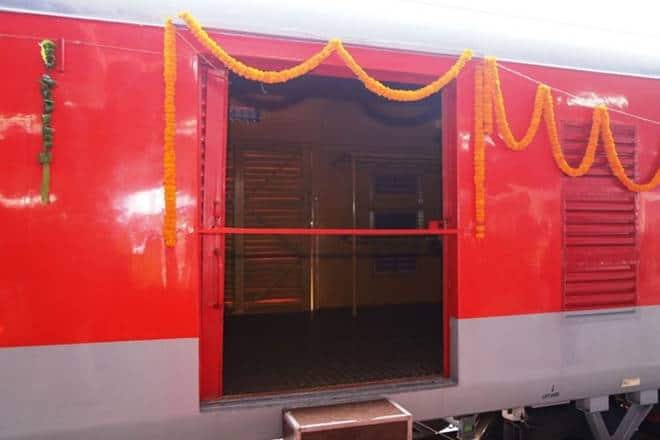 The High Capacity Parcel Van has been designed and manufactured by Rail Coach Factory in Kapurthala.

The new LHB High Capacity Parcel Van has a total carrying capacity of 24 tons and a total volume of 187 m3. In a bid to facilitate transportation of wide goods, foldable two-tier luggage racks have been provided. These coaches have been provided with three collapsible partitions as well as four number of sliding doors. The interior paneling of the coach is of stainless steel and the coach has been equipped with 140 KN air suspension. Also, the coach has been provided with axle-mounted disc brakes as well as anti-climbing CBC coupler with transition screw coupling. Moreover, “fire balls” will be installed inside the coach to douse any fire inside.

The LHB High Capacity Parcel Van has been equipped with flushed-in type fire retardant LED lights. According to Northern Railways, this coach is HOG (Head on Generation) compliant. Also, it has both ends connectivity, therefore, this coach can be attached at any position in the rake. It is being expected that the new LHB High Capacity Parcel Van will generate revenue for the national transporter through the parcel transportation business.

Further, the Rail Coach Factory in Kapurthala is in process of development of E-commerce Parcel Van with a volume capacity of 210 m3 and with a speed potential of 160 km per hour. Moreover, it is being said that the coach will be equipped with a load cell to indicate pay load as well as GPS tracker.

Follow us on
Latest News
Trump says US ‘in decline’; Biden has his own dire warning
Joe Biden unhappy with Elon Musk for buying Twitter
Delhi pollution needs long-term steps, targetting select sectors not way forward say experts
Assembly by-poll results: BJP leading from Gola Gokarannath, Rutuja Latke from Andheri (East)
Five ways how artificial intelligence impacts PGDM students
Twitter Blue to launch in India in less than a month, Elon Musk confirms
How different CTV advertising strategies can help in the reach of a brand
Photos
Dazzling & Astounding! Proposed design of the to-be redeveloped Dakaniya Talav Railway Station in Rajasthan-PHOTOS
16 hours agoNovember 5, 2022
Heart-wrenching! Here is a look at Morbi and the suspension bridge that collapsed
6 days agoOctober 31, 2022
In Pictures: PM Modi in Kargil to celebrate Diwali with soldiers, says, ‘All of you have been my family for years now’
2 weeks agoOctober 24, 2022
Read More
×
How social platforms may help you grow your e-commerce business
Bangladesh opt to bat against Pakistan in virtual QF
When sports stars score as brand endorsers
Gujarat polls: PM Modi to address rally in Valsad district
Petrol, Diesel Price Today, Nov 6, 2022: Fuel rates unchanged; Check rates in Mumbai, Delhi, other cities
Cryptocurrency – Why it did not work in India as a culture