The worst-hit East Central Railways — which covers Bihar, Jharkhand and parts of Uttar Pradesh, the states which have witnessed widespread protests — has also decided to “monitor” the operations of eight trains due to the agitations. 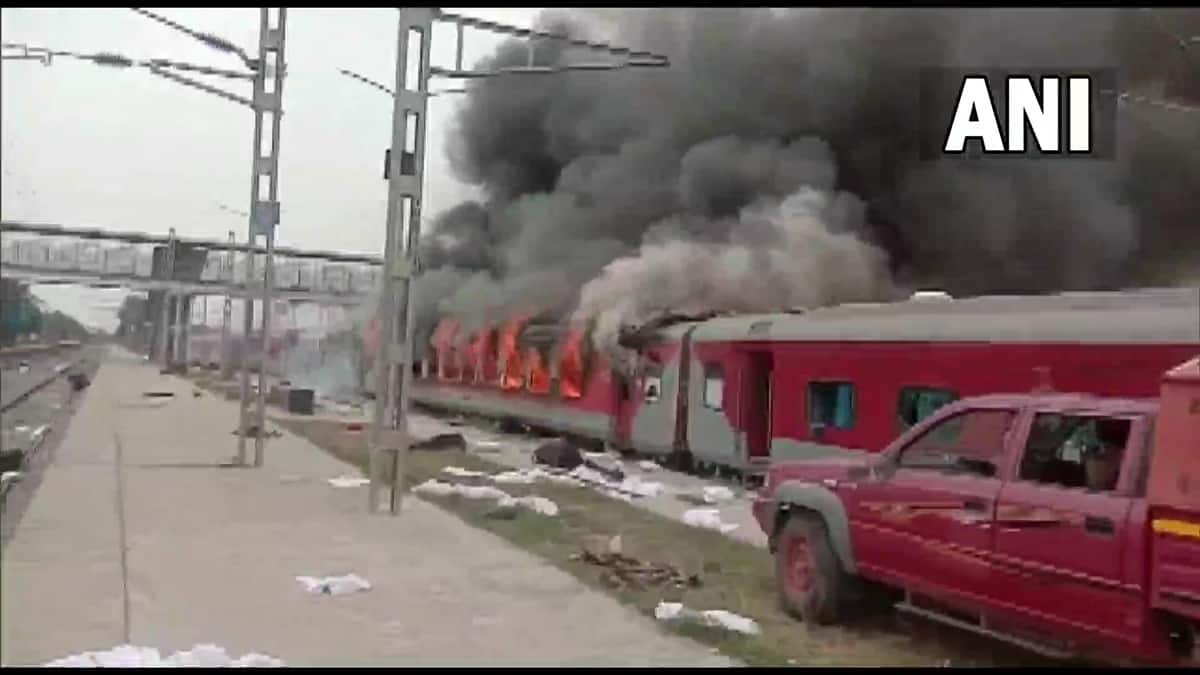 The officials said they are keeping an eye on the movement of these trains and will take decision on their operation as the situation evolves. (ANI Image)

Over 300 trains have been affected and more than 200 cancelled so far due to protests against the Agnipath scheme for recruitment in the defence services, the Railways said on Friday.

The Railways has also diverted 11 mail and express trains. The total number of trains affected so far stands at 340, officials said.
According to the last statement by the zonal railways, 164 trains were cancelled in the East Central Railways (ECR), 34 in North Eastern Railways (NER), 13 in Northern Railways (NR) and around three in Northeast Frontier Railways.

Coaches of seven trains have so far been set ablaze by protestors, officials said, adding coaches of three running trains in the ECR and one empty rake in Kulharia, in the same zone, were damaged by protestors. One coach of a train was also damaged in the washing line at Uttar Pradesh’s Ballia. So far, 64 trains were short terminated in ECR. There were no protests on tracks since 5 pm, they said.

The Southern Railways, in a statement, said all trains moving from its jurisdiction towards Bihar and eastern Uttar Pradesh will be short-terminated due to widespread agitations and arson there over the Agnipath scheme.

Railway Minister Ashwini Vaishnaw urged youths not to destroy railway assets. “I appeal to the youth to not indulge in violent protests and not damage the property of the Railways.” The worst-hit East Central Railways — covering Bihar, Jharkhand and parts of Uttar Pradesh which have witnessed widespread protests — has decided to “monitor” the operations of some trains due to the agitations.

The officials said they are keeping an eye on train movement and will decide on their operation as the situation evolves.
The trains being monitored are:

Several trains run by the Northeast Frontier Railways pass through ECR jurisdiction and three of them have been hit by the widespread protests, the railways said.
In the Northern Railway Zone, the biggest railway zone in the country, 13 trains have been cancelled.
These include:
15624 Kamakhya-Bhagat Ki Kothi Express
15623 Bhagat Ki Kothi Kamakhya Express
12565 Darbhanga-New Delhi Bihar Sampark Kranti Express 15273 Raxual-Anand Vihar Terminal Satyagrah Express 02563 Saharsa-New Delhi train
12273 Howrah-New Delhi Duronto Express
12435 Jaynagar-Anand Vihar Terminal Garib Rath Express One person was killed in police firing in Secunderabad, the first casualty of protests against the Agnipath defence recruitment scheme that raged through several states for the third day on Friday with trains torched, public property vandalised and many thousands blocking tracks and highways.

Railway officials said damage to fixed assets is difficult to assess at the moment.