Brazilian aircraft manufacturer Embraer said the 50-aircraft order, worth about $2.94 billion, placed by the grounded airlines Air Costa, is ‘still in its books’, and it is hopeful the airline will recover. 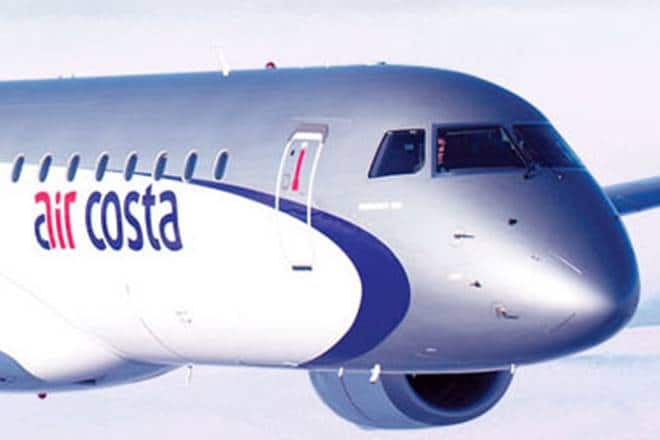 Brazilian aircraft manufacturer Embraer said the 50-aircraft order, worth about $2.94 billion, placed by the grounded airlines Air Costa, is ‘still in its books’, and it is hopeful the airline will recover.

Brazilian aircraft manufacturer Embraer said the 50-aircraft order, worth about $2.94 billion, placed by the grounded airlines Air Costa, is ‘still in its books’, and it is hopeful the airline will recover. The company said it has not set a time frame for a resolution or cancellation of the order. Air Costa is a regional airline promoted by Vijayawada-based Lingamaneni Estates and Projects (LEPL) group. “Air Costa’s order is still on our books. The airline can fly again if they are able to. There is no time frame for cancelling their orders, unless something happens,” Cesar Pereira vice-president Asia Pacific, Embraer Commercial Aviation, said on the sidelines of Wings India 2018. Embraer is in touch with Air Costa, even as the airline is working on a recovery. The airline temporarily halted operations in July 2016 owing to a financial crunch, and the aviation regulator, DGCA, subsequently suspended its flying permit. The airline also failed to resolve unspecified financial issues with GE Capital Aviation Services (GECAS) due to payment defaults. The airline had ordered 50 planes to be delivered starting next year.

When asked if Embraer would divert the aircraft to other markets, he said, “We need to wait for that (cancellation of licence) to happen before taking action.” The LEPL Group-promoted regional air operator had placed a firm order for 50 jets with Embraer in January 2014 under a 20-year fleet-management plan. Air Costa has options for purchase rights of an additional 50 of the E190-E2 jets as well. Pereira said Embraer sees a big opportunity in the regional connectivity scheme (RCS) announced by the Centre last year. RCS is an excellent programme to bring more passengers to the system. But some airlines look at long-term sustainability. They may fly for three years, but what after that? We know that IndiGo decided to go for ATRs. SpiceJet has their Q400s. So we are talking to all airlines to unlock the opportunity with the E175. “We are delivering these type of aircraft, which is an 80-seater to the US market as well for their regional routes,” he added. Embraer estimates the airlines in Asia Pacific will take delivery of 3,010 new aircraft in the up to 150-seater segment over the next 20 years, representing 29% of worldwide demand for the segment. Meanwhile, Star Aviation has placed orders for pre-owned three 50-seater ERJ 145 aircraft to service their routes under RCS. “Embraer will deliver the first aircraft in couple of months,” Pereira said, adding that the regional airline has made future commitments with it for used aircraft. “We are in talks with several other airlines to unlock opportunities with E 175 for RCS routes,” Pereira added.