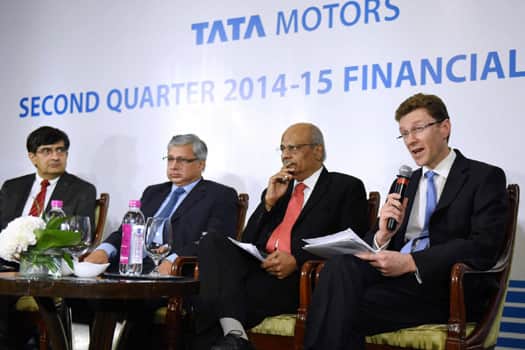 Tata Motors on Friday reported a 7.07% year-on-year decline in consolidated net profit to Rs 3,291 crore for the quarter ended September 30 due to lower domestic sales of passenger and commercial vehicles, currency depreciation and higher taxes paid.

The carmaker, which is part of the salt-to-software group, missed analyst estimates. A Bloomberg poll had pegged the net profit at Rs 4626 crore and turnover at Rs 63,725 crore.

On a standalone basis, net loss from Tata Motors’ Indian business widened to Rs 1,846 crore during the September quarter from Rs 804 crore during the year-ago period. Standalone revenues fell 1.34% over the same period to Rs 8,750 crore.

Indian automakers have been facing severe challenges in the domestic market due to macroeconomic headwinds, coupled with high interest rates, leading to many potential buyers putting off their car buying decisions.

Tata Motors reported a 15.75% year-on-year decline in domestic sales and exports of commercial and passenger vehicles, which stood at 1,27,220 units for the July-September period.

However, the company is hoping for a turnaround in domestic sales next fiscal. It is pinning hopes on its new entry-level sedan, the Zest, which was launched in August and its upcoming hatchback, the Bolt, to revive flagging car sales in India. As India’s economic growth gets back on track, Tata Motors’ management also hopes to see a revival in sales of commercial vehicles.

“We are hopeful that the commercial vehicle segment will see a turnaround and will record growth from the second half of the next calendar year,” Tata Motor’s chief financial officer, C Ramakrishnan, said at Friday’s press conference.

The dismal domestic performance was, however, partly offset by sales and profitability at subsidiary JLR, even though the British carmaker’s net profit dropped over the year earlier.

JLR reported revenues of £4.81 billion for the July-September period, up 4.2% from the year ago. It reported a net profit of £450 million, 11.24% lower than the year earlier. Net profit came in lower “due to unfavourable revaluation of foreign currency debt and unrealised hedges and higher depreciation and amortisation.”

Mayank Pareek, president of Tata Motors’ passenger vehicles business, said the company sold slightly over 10,000 units of the Zest between August and September.

“Though we are seeing huge demand for the Zest, we are not being able to produce it in the numbers required by the market,” Pareek said.

“Some of the bottlenecks, which are affecting the Zest’s supply, include the fact that several tier I and II vendors don’t have enough capacity.”

Tata Motors is also trailing the original schedule for launching the Bolt, which will now be launched in the fourth quarter of the current fiscal, Ramakrishnan said.